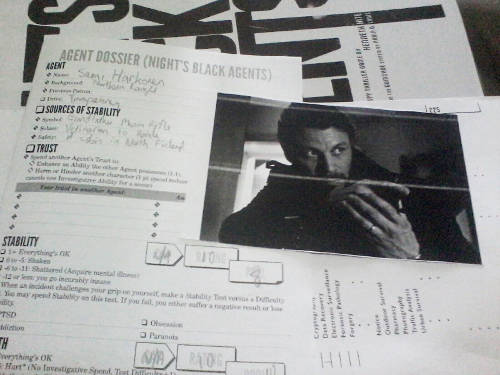 I did not have the time to produce a play report in my own words, so here’s Kai’s diligently written report (with bonus GM’s Commentary in italics.)

Following the confrontation at Waterloo Station, Emelia Sanderson’s team took the wounded thief Vin to a secret interrogation facility in a warehouse near London City Airport. This team consisted of a former mob surgeon named Dr Kana, a former mob accountant named Sachs, and a young driver named Peltier. All of them, like Misha, were off-the-books operatives working for Emelia of MI-6.

These were additional NPCs I created to create the illusion of support for my players. Then of course, Vin turned full bloodsucker and I took the illusion away.

Meanwhile, our freelance crew performed a stealthy recce of the East Village construction site and showroom where the gangster Gary Camon was known to be staying.

These are actually the real Olympic Village apartments, being renovated for commercial use by the end of 2013. I had Gary Camon gain control of the construction and contracting on this job, and recruited muscle from the construction workers.

Jacob supported the team by sending a quadrotor drone to scout ahead and setting a fire in a metal drum on the street to distract the construction site guards, while Sami stole the security shack’s computer along with all the recent security CCTV footage. Misha and Zlatan encountered a couple of Camon’s thugs guarding the showroom and beat them soundly with some metal pipes that were laying about. But Camon and his gang had abandoned their showroom home in a bit of a rush. The CCTV footage showed that Camon had gathered two lorries full of thugs and packed away his bags (and an Asian girlfriend) in a rented Chevy SUV.

After stealing Waterloo Station’s surveillance footage with a little help from a government insider named Jill le Fleur, Misha and Jacob also learned that a Metropolitan police inspector, Purcell, had come around the station asking questions. Misha’s contact Lestrade confirmed that Purcell was a possibly corrupt cop working in a unit for gathering intel on London gangs. He also checked the rented Chevy SUV’s plate and managed to get Sixt Car Rental to track the GPS of the rented vehicle…to a location near London City Airport.

At this point, Macx wanted to get the car company to activate the immobilizer of the rented SUV, but I ruled that the bad guys had chosen a car that didn’t have immobilizer installed. In retrospect it would not have broken the scenario to allow the immobilizer to be used.

And yes, Lestrade’s name was the butt of many jokes.

That was when our crew got the bad news. First, they got a called informing them that Vin had died at the warehouse. Shortly thereafter, a panicked call came in for Misha from Peltier, one of the three men guarding Vin. Apparently Vin had come back to life, made an escape attempt and had been stopped after being shot numerous times…but she was still very much alive and active, hiding in the medical room.

Worse, Vin had managed to get hold of a phone. This explained why Gary Camon and two lorryloads of thugs were about to storm the industrial park.

Vin wasn’t a full vampire before this – she had some supernatural powers, like psychic senses and mesmerism, as well as blood-boosted strength and agility. But as a result of dying of her injuries, she became a full-on bloodsucker. Detailed spoilery explanation down below. Vin mind-blanked Kana, stole his phone, called Camon with her location (thanks to her special senses, she knew where she was), then tossed Peltier across the warehouse before getting stunned by five bullets to the chest. The last MI-6 freelancer, Sachs, wrestled her back into the medical room. She succumbed to bloodlust and went nuts draining Sachs’ blood.

With a little help from Zlatan’s amazing driving and street navigation skills, the team arrived at the warehouse just ahead of Camon’s gang. Misha, Zlatan and Sami went inside only to find that Peltier was down with a broken arm, Sachs was dead, and Kana had been bitten by Vin and had no memory of the past hour’s events. Vin was hiding inside the medical room, and seemed to be confused and angry, complaining of bright lights and other odd physical effects (presumably including coming back to life after dying, and suddenly healing all her wounds from the dog mauling). 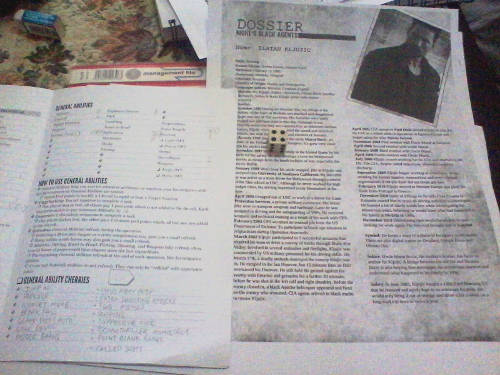 Misha reached out to Vin and convinced her that the MI-6 operatives had nothing to do with Vin’s condition (except for the bullet wounds). But time was running out. Camon’s lorries crashed into the industrial park, killing the innocent gate guards, and Zlatan and Sami devised an arson plan to breach the gas main and burn the warehouse down rather than let a monster like Vin escape. Outside, Jacob tried to flee the shotgun-wielding thugs in the crew’s Land Rover, driving it around to the rear entrance. Unfortunately, he couldn’t outrun the thugs, and had to ditch the Land Rover, dragging the crew’s prisoner Snotty into the warehouse’s rear entrance as shotgun fire echoed all around him.

Now the crew was trapped inside the warehouse, with thugs at both entrances trying to break in.

At this point, I read out to the group the rules for getting captured and the game’s promise and benefits to captured agents. But not surprisingly my group didn’t want to give in – who does?

Misha and Sami convinced Vin to call Camon and negotiate a truce.

Misha tried to be convincing. Sami threatened to blow up the warehouse “sponsored by British Gas.”

Camon agreed to back his men off and allow the crew to drive away, in exchange for the safety of Vin and Snotty.

Cut to a few hours later, at first daybreak. A tired and shaken crew of Misha, Sami, Jacob and Zlatan rested and recovered in an unused building in a boarding school in Bexley, together with the injured MI-6 black operatives, Peltier and Dr Kana. Emelia and Lestrade arrived and debriefed the crew. Air Marshal’s computer tablet and files were still in Camon’s hands, so Misha made a phone call to set up a rendezvous the following night at the London Eye.

Emelia’s resources had been drained as a result of this débâcle, and she had her hands full just keeping everything hidden from her superiors in the Government. But all were in agreement that whatever Vin was, she represented a threat. Camon’s gang were just small fry – this “vampire” was the main problem.

Dr Kana determined that Vin’s bite had transmitted some sort of bacterium similar to a blood parasite only known to affect dogs. It resembled a strain of Haemocanis known to come from Eastern European strays. What it was doing surviving in his bloodstream, nobody knew.

Misha called Camon up and arranged for another rendezvous. This time they would pay more for the tablet and its hard drive – a quarter million pounds (provided by Air Marshal Prince).

Actually, Prince was willing to go up to a million, but my players wanted to drive a harder bargain.

The following night, Misha and Sami boarded a car on the London Eye, together with Camon’s right-hand man Grey, Camon’s girlfriend Ms Rose, and an injured and unhappy Snotty. They arranged for the exchange, checked the merchandise, and sized each other up. Grey was an ex-military man (Welsh Regiment) and he could tell that both Misha and Sami had been well trained as well. They hinted at the possibility of future cooperation (possibly because they were keeping a blackmail copy of Prince’s files).

Camon and gang are in over their heads, but trying to move up to the big time with the help of their novice vampire ally. Whether this will work out for them in the long run, we don’t know.

Rose was the busty Asian girlfriend of Gary Camon, and an adviser on the proceedings. The crew used Investigative skills to deduce that Mr Grey had seniority in the chain of command, however. Also, Billie Piper jokes were made. Ivan and Hisham also toyed with the idea of pulling a Steven Spielberg Movie on the London Eye, if you know what I mean.

Meanwhile, Jacob and Zlatan were watching the Eye from a hotel and an elevated parking lot, respectively. They spotted at least one of Camon’s thugs waiting at a car nearby, and undercover policemen were also watching the Eye.

After the meeting ended and the two groups went their separate ways, the undercover coppers tried to tail Misha and Sami. With help from Jacob and Zlatan, they were able to foil the tailing teams and even reversed the tail, tracking them back to a rendezvous with the suspicious Inspector Purcell, who in turn was seen driving into the UK Border Agency headquarters to report immediately afterwards.

Surveillance rolls and teamwork. This was one of the best parts of the operation, because unlike everything else it went very smoothly.

The crew returned the tablet to a grateful Air Marshal Prince, who explained that the fighter plane procurement crisis was set to resolve itself within a month, after which the contents of the hard drive were not likely to be scandalous anymore. But scandals didn’t concern the crew as much as the possibility of a vampiric conspiracy did.

And Jacob had worries of his own – he told the crew that Vin moved like the drug-enhanced agents of the now-defunct Project Raven, which had died in flames, gunfire and explosions in Berlin in 2009. It was the same case which Brigadier-General Lennart had been investigating in his own private files…and it was somehow connected to the drug company EMARTECH, part of the powerful Inish Medical Group.

Lots of backstory hooks here. Zlatan’s family was also killed by some sort of animalistic people during the Bosnian War. And Sami once found a monstrous hound on the Finnish border. Also, EMARTECH had been trying to engineer drugs to help patients with high light sensitivity. Ominous.

The crew went to hit up Emelia for more funds and some MoD cover identities. It was time to get to work again.

Again, thanks for a great game Kai, even if we didn’t get to dislodge the London Eye from its mount and get it to roll down the street to pursue bad guys.