This was a Risus the Anything one-shot game that I ran for my Master’s Degree supervisor Prof Harshita and my colleague Asha who was along for the fun of it all. I thought Risus would be a great way to introduce them to RPGs as a language learning tool because of the versatility of the Risus’ clichés. It went smoothly, and I can see how the characters could develop new clichés as the story went on.

The retired General Desi and entrepreneur Ms. Bong were travelling through the tall grass and rolling fields of the land they called New Perlis. Desi needed a walking stick as at her old age she was Easily Tired (1). Above them, two suns blazed in a cloudless noon sky. The land rose and then opened up below them. In the centre of the valley below, they saw clusters of buildings of a frontier town. 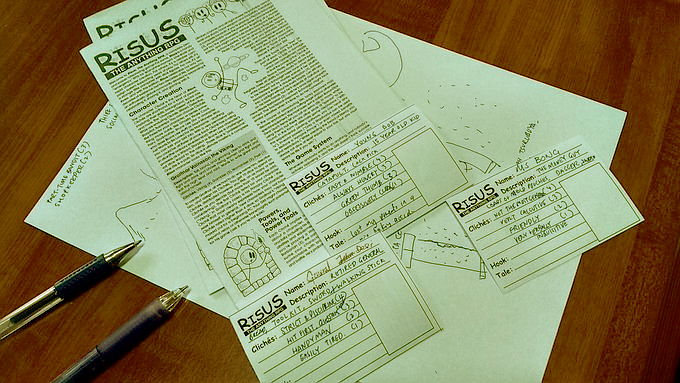 The rules of Risus in a single leaflet

As they strolled down towards the town, Desi’s elderly senses failed to notice something. It was something that Ms. Bong noticed. Before she could warn her friend, a boy – barely 15 years old – pounced out from the tall grass and tried to grab one of the many pouches of gold that girdled her waist.

Ms. Bong, who was “the money guy” who is Not The Most Generous (4) was successful in avoiding being robbed. The scared boy turned tail and disappeared into the grass. General Desi did not need to brandish the sword hidden in her walking stick.

They continued on to the frontier town.

The town was a collection of wooden buildings. Shops and businesses lined the dusty main street while houses peppered its outskirts. Thick trees grew between houses where they could.

Also, there were dead bodies everywhere.

The townspeople had been murdered. The corpses looked like they had been stabbed by blades or shot by arrows. General Desi and Ms. Bong advanced cautiously. All caution however were thrown to the wind when Ms. Bong saw that the town bank’s door was wide open.

Inside, they were almost ambushed by someone. They found that the man was one of the raiders of the town. His gang had invaded the town to steal something in the bank’s vault: The Orb of Obsidian Diamond. Naturally Ms. Bong, who was Very Calculative (3), was enamoured with the idea of having such an orb.

With him was the boy who attempted to waylay them earlier. He identified himself as Bob and was not part of the raiders.

But, the raider told him, that something else had attacked and killed his gang members. It was a fierce and giant creature had been attracted by the blood of the fallen townspeople.

They investigated the slightly-open vault door and discovered that there was something blindingly bright within the vault. The raider did not know why the Orb of Obsidian Diamond began to glow in a silver-blue light. It also felt to them that the orb was pulling them physically towards it.

Desi with her Strict and Disciplined (4) mind coerced the raider to enter the vault to take the orb. He reluctantly and carefully crossed the vault threshold. He touched the scintillating orb and screamed. Desi and Bong witnessed the man being disintegrated and sucked into the orb. Then, the man was no more.

But the size of the glowing orb grew bigger.

Suddenly, the boy who was closer to it, was pulled towards the orb and also vanished.

They both retreated to the bank lobby. Ms. Bong still wished to obtain the precious artefact, but Desi left the bank to scout the deathly silent town. Ms. Bong thought it would be great to experiment with it, so she threw one of her bags of gold through the vault door at the Orb. The bag of gold vanished in a flash of scintillating light.

Ms. Bong regretted using her gold for the experiment. She also noted that the orb grew slightly in size.

Meanwhile, General Desi who was hungry found a bread shop and ate the freshly baked bread on the counter. That was when she noticed something moving outside. Something large.

She stealthily followed the huge shadow from a distance. From the back, it seemed like a huge creature. It was as tall as a two story building as just as wide. Its short arms were tipped with sharp talons. Its head was hidden by its furry bulk of a body from behind. There were small bat-like wings on its back that did not seem to have the capacity to lift it into the air.

The thing was headed for the bank and Ms. Bong had no idea it was approaching.

What followed was a sequence of events that began when Ms. Bong exited the front door of the bank. Too tired to run to her companion General Desi tried to signal Ms. Bong from under a tree. But the creature saw Ms. Bong and lunged at her. It was faster on its two stubby, furry feet than Ms. Bong believed possible. 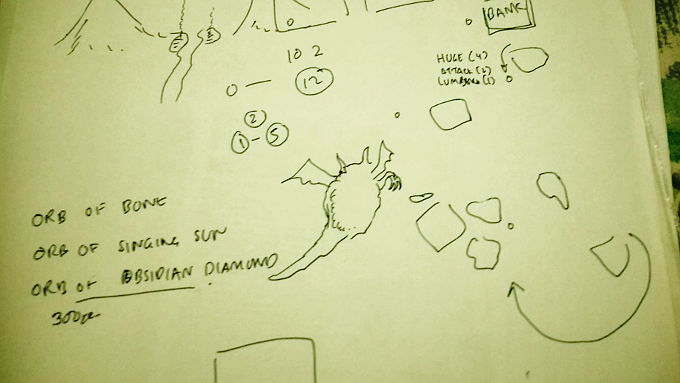 The creature is yet-unnamed

Ms. Bong headed back into the bank to hide. The creature crashed through the front wall of the bank. It lost its balance and fell through the wide open door of the vault. There was a bright flash and the huge creature vanished and the orb started to grow bigger and consume the vault. The size increase did not stop. It kept consuming walls, flooring, anything it touched.

Ms. Bong jumped back out of the bank when she realised that the orb would now continue to grow and consume everything. She rendezvous with General Desi and they considered their options.

If they do not stop this the land of New Perlis would be destroyed. Or would it? Did the people the Orb of Obsidian Diamond disintegrate or were they absorbed and carried off to another location? They knew they could not outrun the accelerating diameter growth of the orb, so they turned around and braced themselves.

Then, they both ran and leaped into the silver-blue light.

Then there was darkness.

By feeling around her, Ms. Bong found herself lying down and trapped in some sort of casket. It was freezing cold. She yelled and started hitting her metal prison. Suddenly the cover of her casket swung open. Before her stood a woman in her mid-20s who had the same skin and hair colour of General Desi. She looked down and discovered that she also had the hands and arm of a young woman. They both confirmed their identities to each other.

How were they both so young?

There was another open casket, presumably the one Desi was lying in. Ms. Bong removed the cables that was stuck to chest and arms. She climbed out of her casket where it was considerably warmer. They both appeared to be wearing grey coveralls made of a fabric she had never seen before. Before them was a room filled with closed metal caskets. The caskets lined the walls from one end of the room to the other. Each casket had a name. There was a door at the far end.

Bong was upset that all her gold had disappeared.

Desi discovered that she was still a Handyman (2) and was able to unlock the door. Outside the room was a huge corridor. The wall opposite the door they just walked through was a window. It was transparent from top to bottom and from left to right. Beyond the window was the night sky. A million stars shone in the darkness.

Where was the ground? Why was everything outside the window the night sky?

They headed down the corridor which curved ahead. There was a door. Desi opened it and they walked into a room with lots of long tables and chairs. There they were met by a white metal creature that ran along rails on the ceiling. It had a metal arms and sported glowing red arms. It seemed very friendly… and slightly alarmed that they had woke up.

Desi told the red-eyed metal machine that she wanted to go back to New Perlis. The machine told them that New Perlis was a setting of a story that was made popular by a writer back in the year 2374, and was adapted as a film in 2387. New Perlis was one of the worlds running for the sleeping crew of the colony ship which still had centuries of travel left before arrival at their destination star system.

There were twenty thousand other humans aboard and they were all in cryogenic sleep, as Desi and Bong had been. The three of them should not be awake.

A 20 year-old man appeared out of nowhere in old clothes and unshaven. At first Desi and Bong thought the man was going to attack, but then he was crying. It had been five years since he saw another human being. Then they realised that this was Bob, the young would-be thief who had been consumed by the orb.

Five years? He had only disappeared five minutes earlier at the bank, as far as Desi and Bong knew! He had not seen the raider who had disappeared a minute before he did. 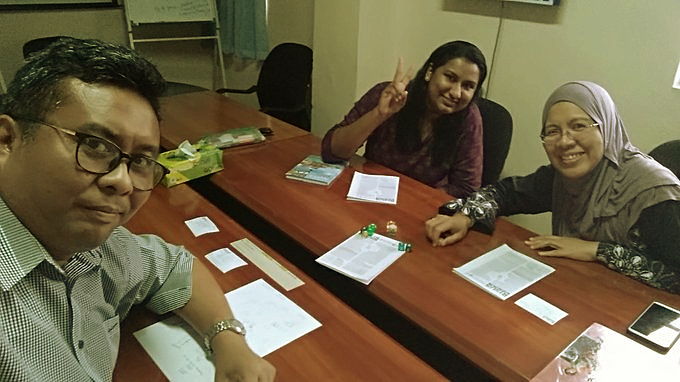 Bob offered them some food as they were apparently in the mess hall. He requested food, and the machine acknowledged him. The food they ordered appeared on platforms that rose up from the dining tables they were sitting at.

As they ate, they considered their next move. Would they find a way to go back to sleep? Would they explore this ship that appeared to fly between the stars?

The End… for now.