Captain’s Log USS Sienkiewicz. Stardate 57048.16. Captain Vosgal Toor reporting. Starfleet has assigned the Sienkiewicz to help with a science station on the craggy mountains on the planet Volor III. The Volor system is located at the border of the Alpha and Beta Quadrants. Despite being at a safe location well within the territory of the United Federation of Planets, the planet itself will be a challenge for our crew. Volor III has been wracked by a planet-wide atmospheric disturbance and violent tectonic movements that threaten the Volor Geological Station. If the Away Team is unable to fix the problem, then they will have to evacuate the Federation science team there. 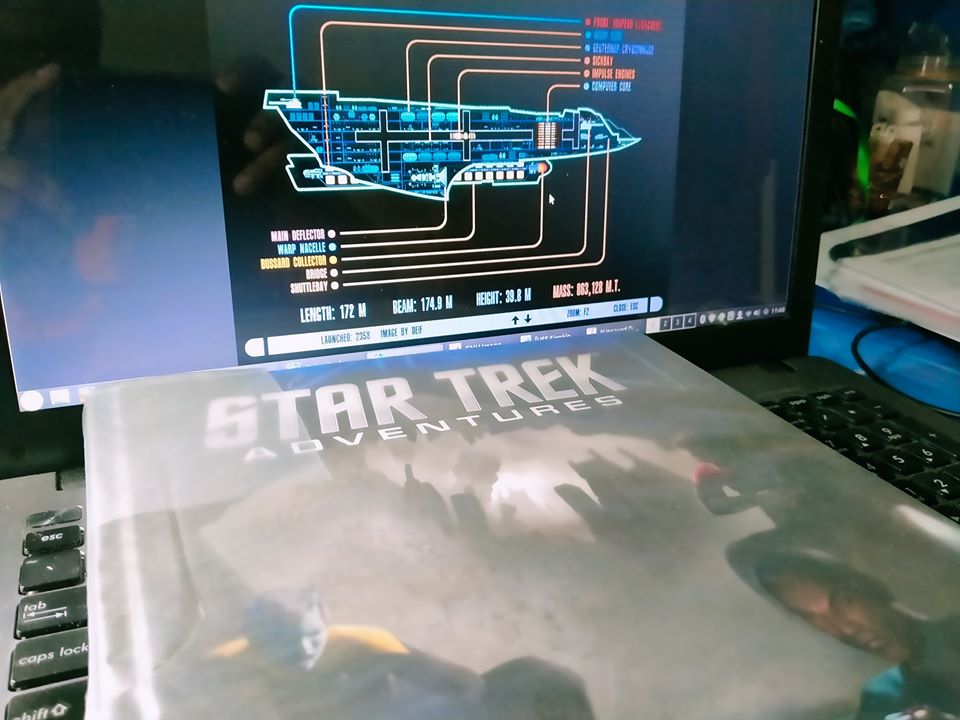 The USS Sienkiewicz manoeuvred herself into higher orbit above the third planet of the Volor system. The L-Class planet was a knot of thousands of rocky peaks which were grouped into dozens and dozens of continental plates and fragments pushing into one another for the last million years or so.

The Federation had discovered huge, gigantic deposits of minerals on the surface of Volor III: heavy metals such as neodymium, lithium and gadolinium.  Some deposits were up to 200 kilometres in diameter and at least 50 kilometres deep. Scientists and geologists set up a geological station there to investigate this anomaly. Also, they hoped to learn whether it formed naturally… or was artificially made.

But the Sienkiewicz had arrived for a rescue mission. From above, they were now witness to a new, more peculiar development: Gargantuan storm cells have formed all over the planet. The storm clouds were highly saturated with charged particles.

The Away Team Deploys

Captain Toor was unable to contact the scientists at the Volor III Geological Station because of the atmospheric interference. Their transporters could not beam down through the lightning-wracked clouds. So, he ordered a team to head down to the station on a Danube-class runabout, the Da Costa.

This was the first Away Team mission for Tamat and Miral aboard the Sienkiewicz. They were assisted by the medical officer Dr. Suuronen. She yawned and said, “Another Away mission? Nothing exciting ever happens. Wake me up when we get there.” Ensign Sparik piloted the Da Costa out of the forward hangar bay opening and set a course for a planetfall towards the geological station on the planet. 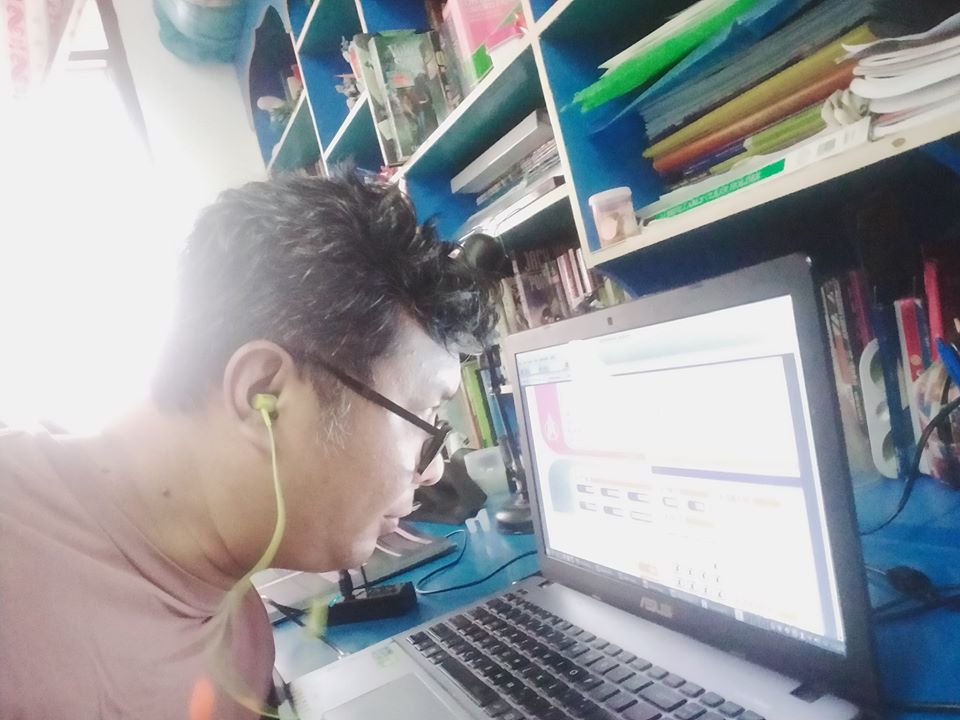 Gamemaster at the laptop

As they dropped into low orbit, the space to their starboard shimmered. The shimmer coalesced into the menacing silhouette of a Klingon Bird of Prey, which hailed them.

A young-ish Klingon in a commander’s uniform spoke onscreen, “I am Korag,”

“I am Lieutenant Kodar Tamat aboard the Federation runabout Da Costa. This is a Federation research planet. Please state your intentions here.”

Korag looked at Tamat with a bemused expression, “A Cardassian? In a Starfleet uniform? We are also here to conduct… research. We will be conducting surface scans from orbit. Maybe we can help each other out.”

“Perhaps,” Tamat said. After ensuring that their work would not tread on each others’ toes, Tamat ordered Ensign Sparik to fly to the surface. 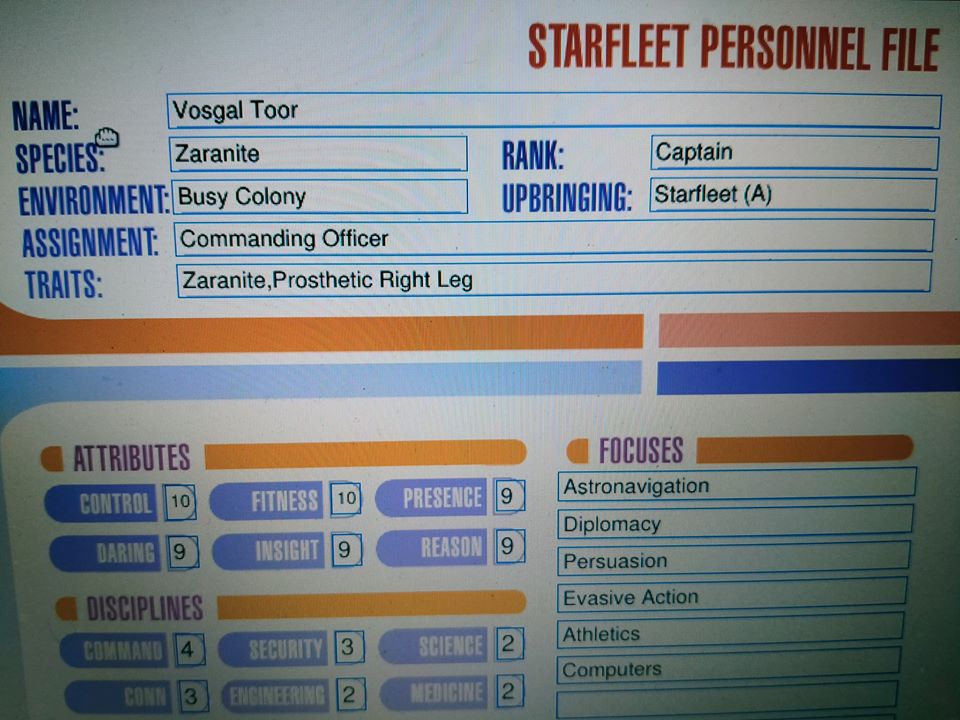 The Final Flight of the Da Costa

The Da Costa dove into the hurricane clouds. Lightning flashed all around them as they descended. Sparik drew on his piloting skills to ensure were not blown off course.

Miral used the sensors and her own knowledge of science to help Sparik through the violent storms. But she was unable to predict a bolt of lightning that clawed at the Da Costa. The surge of energy took out the Da Costa‘s shields, weapons, navigational computer and all the sensors.

Sparik asked everyone to strap themselves in. He fought the winds and used his eyes to spot the landing lights ahead. With marginal control of the manoeuvring thrusters, he was able to plough into the short landing pad beside the geological station.

The Away Team discovered that Sparik’s flying skills had saved their lives, as the landing pad was not designed to accommodate a non VTOL landings.

A Mountain of Problems

The Volor III Geological Station was built into the side of a rocky silicate mountain, near its peak. The Away Team stepped through the main doors and entered a research rotunda. There were sensor readouts, holographic displays and control consoles. There were doorways that led to the living quarters and workshops beyond it.

The station’s chief scientist Dr. Iwasaki and their engineer Serrano greeted the Away Team.  For a moment they froze to be addressing a Cardassian in Starfleet uniform.

Dr. Iwasaki said, “We are unable to communicate because the storm’s lightning had fried our communications pylon.  Some of our personnel have been injured by the storm. Now you are trapped here with us.”

Iwasaki explained further, “Things are going crazy. There are quakes happening across the planet from deep within the core. We caBut something else: we have discovered that the mineral deposits are homogeneously concentrated to a single location. For example, all the praseodymium is in a patch of ground about two hundred kilometres to our north. 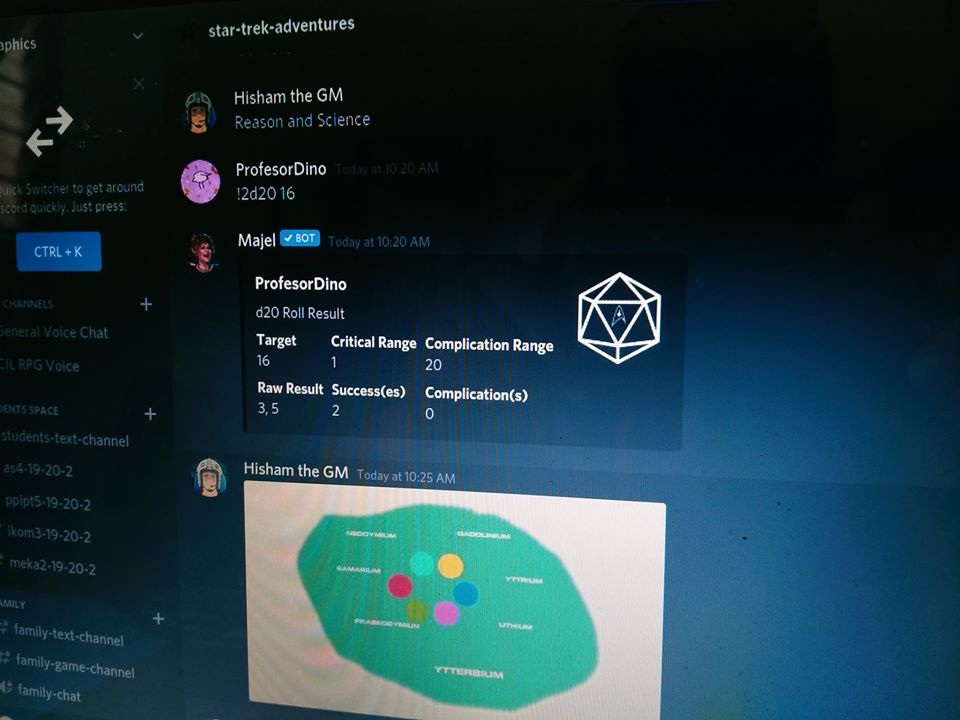 “Here’s the more peculiar part: the different patched of minerals have moved – geologically speaking – to locations matching the points of a hexagon over a diameter of 11,000 kilometres over the eastern hemisphere of Volor III.”

With the help of station engineers, Miral rigged a weather balloon to float up with a comms relay module to be able to contact the Sienkiewicz at a higher altitude. When contact was made, they would use transport pattern enhancers to beam themselves back to the ship.

Unfortunately, Tamat discovered that the crash smashed one of the transporter pattern enhancers into pieces. It was irreparable.  He returned to and searched for useable parts in the Da Costa.  A violent tremor shook the mountain.

Meanwhile, Miral’s team launched their weather balloon. However before it ascended far, a bolt of lightning struck and blew it to smithereens. Their sensors showed that the flames and debris were immediately swept away by the raging winds. They had one more weather balloon left and prepared it.

Back in the Da Costa, as Tamat was working through the debris, a two-metre long worm-like creature ate through the hull into the crew quarters. It was about to pounce on Tamat with its sharp-toothed maw when he spotted the it. The Cardassian  swiftly drew his Type 2 phaser pistol and fired. The phaser beam sliced through and killed the creature. Unfortunately the beam also ignited a pocket of gas build-up in the wreckage.

The flames obstructed him from running to the hatch at the front of the ship, but Tamat steeled himself, grabbed his salvaged gear and rushed through the inferno. He jumped out of the ship as the Da Costa‘s interior was being immolated.

He felt more quakes as he rushed towards the station’s external doors. As he ran through the doors, Miral and Serrano passed him by.  The engineer yelled to him, “Watch out for wild Volorian bore worms out here!”

“Thanks for the early warning,” Tamat yelled back dryly.

Miral and Serrano set and deployed the last balloon. Miral hoped that his algorithm would help the thrusters steer away from danger in the high winds above. It climbed and climbed, firing its small thrusters to avoid the worst of the storms.  When they were satisfied, the duo scrambled back to their consoles in the research gallery.

As Tamat finished putting together the jury-rigged pattern enhancer in the gallery foyer, Miral locked on the the weather balloon’s transceiver. Its sensors were delivering data incessantly, even though it was difficult to makes sense of the mercurial alphanumerics. The Denobulan’s eyes grew wider. She yelled, “Lieutenant Tamat. I’ve locked on to a transporter pad. Everything’s being destroyed. We have to beam out now.”

Promptly, Tamat activated his devices and called everyone into the space between the enhancer pylons.

“Here it comes!” Miral leaped down to the foyer from her research platform. Immediately, the tremor shook with even more violence than before. The gallery’s reinforced windows shattered inwards. The walls began to collapse, allowing the unrelenting winds to encroach. Flying debris threatened to strike them or impale through them.

Then a transported beam caught them, and the dying world disappeared around them. 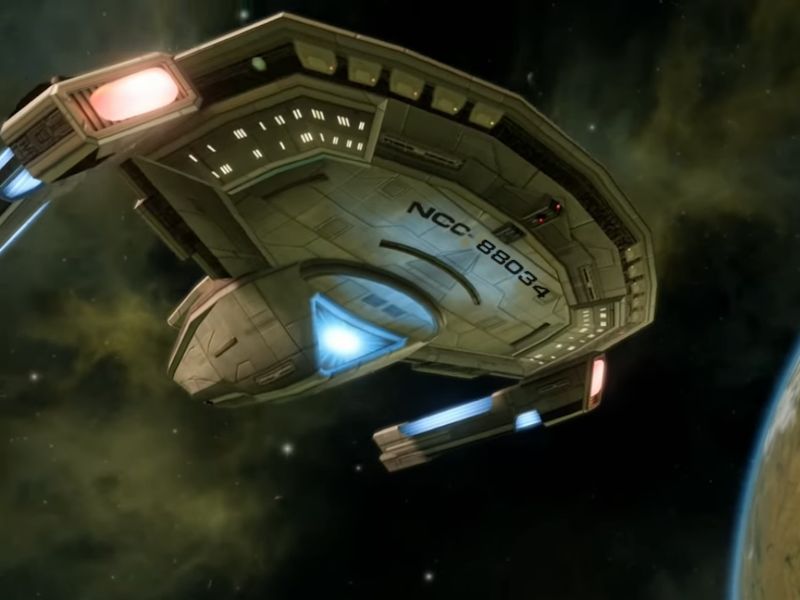 The Feast at the End of the Event

The crew of the Da Costa and the battered scientists looked around and discovered that they had been surrounded by Klingons. Commander Korag stepped forward, clapped his hands once and boomed out, “I am glad to be aiding our Federation brothers! Welcome to our ship. Our home is your home. Please, make yourself comfortable as travel to your starship.”

The Bird of Prey’s viewscreen showed a view of the planet. As they ascended higher, they were able to see part of Volor III’s planetary disk.

That was when six interdimensional portals appeared in medium orbit, each positioned above the six gigantic mineral deposits. An enormous giant tentacles slithered out of each portal, each making its way down into the atmosphere towards each deposit. The scale of each tentacle was immense.

Dr. Suuronen was excited by the sight of this interdimensional marvel. She muttered, “Now this is exciting!”

Each tip of the rugose tentacle slammed into their assigned mineral deposit then began to glow. The glowing pattern indicated that it was sucking the deposits up the tentacle to whatever it had come from beyond the six portals. The planet began to collapse in on itself. Then it exploded into a cloud of debris.

The tentacles retreated back into their portals and disappeared as if they had never been there to eat a planet.

“That’s something you don’t see every day,” said Dr. Suuronen, slapping absent-mindedly at Sparik’s sleeve and grinning somewhat happily. “Lieutenant Tamat, usually nothing happens on previous Away Teams that I’ve been assigned to. But if this sort of exciting thing happens with you, I will be happy to be in your team next time!”

“Thank you for returning our crew and the scientists back to us, Commander,” said Captain Toor standing between his seat and the main viewer. Tamat and Miral flanked him on the bridge of the Sienkiewicz. Suuronen and Sparik stood further back at the turbolift doors.

“We are more than glad to help our Federation allies of course,” Commander Korag nodded at them, almost sagely. “Lieutenant Kodar Tamat. You have carried yourself bravely and with honour on Volor III. If you wish to have a career with the Klingon Empire, I would be happy to have you aboard my ship.”

“Thank you. I will keep that in mind,” said Tamat. Miral raised an eyebrow at him. He shrugged back at the Denobulan.

After Ensign Coufax terminated the comm channel, Korag’s face disappeared from the viewscreen. Almost immediately after, the Bird of Prey – barely any bigger than their own Saber class starship – turned and soared away into the stars.

Before they left the bridge, Toor ordered Tamat and Miral to find out what happened to Volor III. What were those giant space tentacles and how did it destroy an L-class planet? What if it happens again? Could they even stop it?