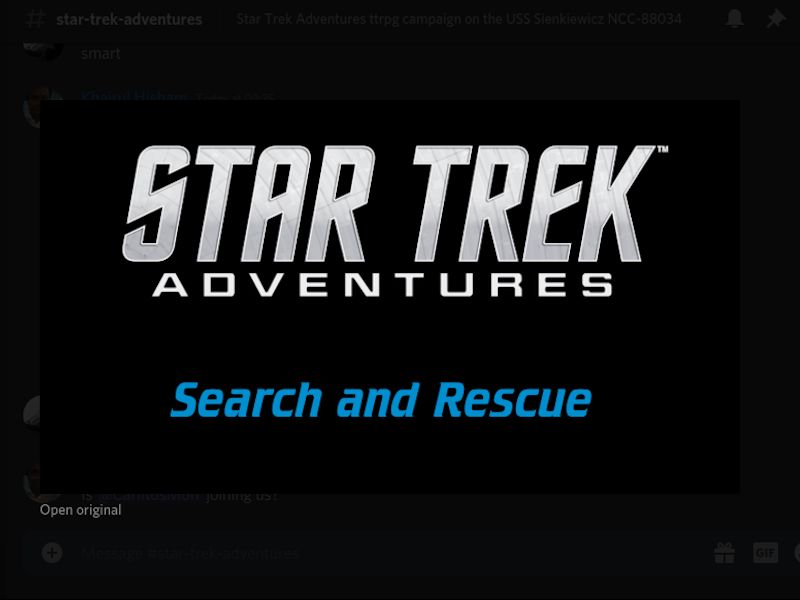 Captain’s Log, USS Sienkiewicz. Stardate: 57079.1. We have been sent to the Melpomene Sector to search for the missing USS Nairobi, a New Orleans class Federation starship. We have a number of clues to our advantage. The cargo ship SS Purzelbaum has spotted the ship in the Balateen system. Also, Director Sukeb of the New Inverness colony on Balateen purported to have received transmissions from it. But the question now is should we first investigate Delta Melpomene where the Nairobi picked up a team of Federation archaeologists.

It was shortly after the mission to Volor III.

The Saber class USS Sienkiewicz dropped out of warp in the Melpomene Sector, beyond Phi Virginis, not too far from the Typhon Expanse. After Captain Vosgal Toor had just recording his log, he looked at the empty Executive Officer’s seat beside him and mused. Then he called to the young Cardassian at the Bridge Engineering station, Lt. Kodar Tamat.

He said, “Since our First Officer has yet to be assigned by Starfleet, I’m assigning you as the interim First Officer, Mr. Tamat.” 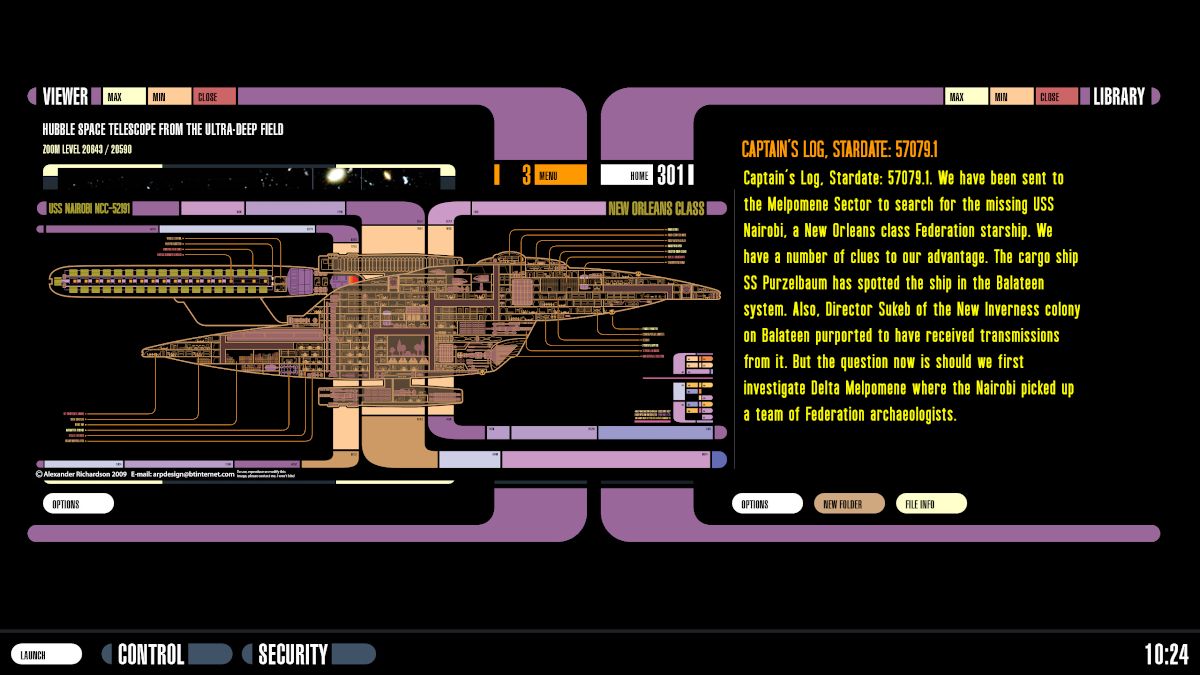 Surprised, Tamat looked up and said, “Me? Uh, I mean, yes, Captain.” As he graciously thanked the Captain, Lt. Annette Metaxis and Lt. Aaditri Fuentes at the Conn and Ops stations applauded briefly. He smiled curtly at the ladies.

“Mr. Tamat,” said the captain, “We have to look for the Nairobi. Based on the information we have what course of action do you suggest we take?”

Let me see, Sir. We need to weigh our options carefully. I believe the Balateen system is our best choice, given the clues we have been provided.”

“Yes sir,” quipped Lt. Fuentes. “That’s how we usually weigh our options.” Lt. Metaxis giggled at this. Tamat stiffened a bit at the giggle, but ignored it otherwise. 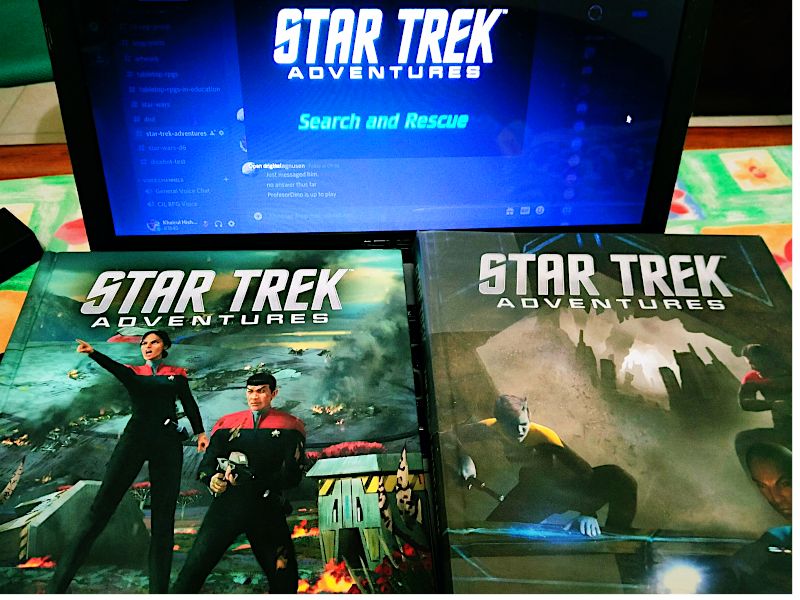 As Balateen was close by,  the warp journey took merely 14 minutes. Upon dropping out of warp, Tamat said, “Captain, we should order a full system scan first.”

“Excellent, Mr. Tamat.” Toor signalled the Denobulan officer at the science station. “Lt. Miral, Give me a sensor scan.”

[With 2 successes and one complication] Miral performed the scan. She reported, ” Two ships, captain, a quarter of an AU away, orbiting around. I can’t exactly tell what they are, so we’d have to get closer.” [Complication: inability to determine starship types, due to the charged particle field around the planet.]

“Thank you, Mr. Miral,” said the Captain. “Mr. Tamat, do you think we should go in closer?”

“Yes, Captain, we should approach the planet and perform closer scans.”

She acknowledged him, “Aye, sir. Full impulse.” The ship burned its impulse engines while under a light, fractional-warp field strength, and the Sienkiewicz made a speedy run towards the low orbit of the gas giant Balateen. 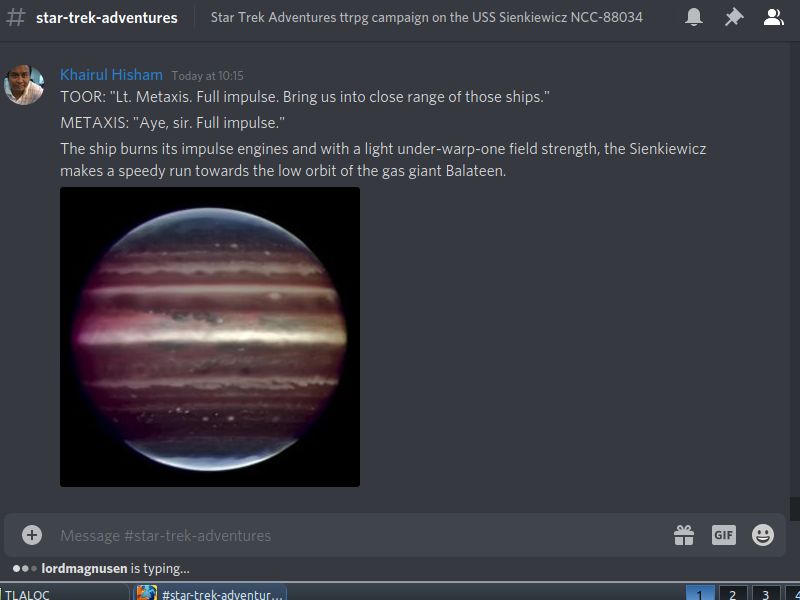 This is just a shot of Jupiter

As they dove deeper into the planet’s gravity well, Lt. Miral performed another sensor scan (and this time succeeding with one critical and one regular successes). She barked quickly, “The sensors show a civilian Federation cargo ship being attacked by an unknown type ship, presumably a pirate vessel, Captain!”

Disruptor beams from the attacking starship are blasting at the Antares-class cargo ship’s shields as it attempted to make its way in an orbit around Balateen. Its warp drive appeared to have been severely damaged.

“Let’s go in. Mr. Tamat,” announced the Captain. “You have tactical control.”

“Red alert, weapons and shields on!” Tamat snapped, bolting up from his seat. As the Cardassian leapt for the weapons console beside Miral, Weapons status and targeting controls pulsed into view on the panel.

Toor commanded, “Mr. Miral, give him aid where you can. Mr. Matexis, steady as she goes.”

“Aye aye!” said the Science Officer as she began scanning the attacking ship’s shields for weaknesses.

Lt. Fuentes opened a channel. “This is Captain Toor of the Federation Starship Sienkiewicz. Attacking ship, you are advised to power down your weapons and stand down. If not, you will be fired upon.” After 5 seconds of inaction, the pirate ship fired  a red-yellow beam at the Sienkiewicz. 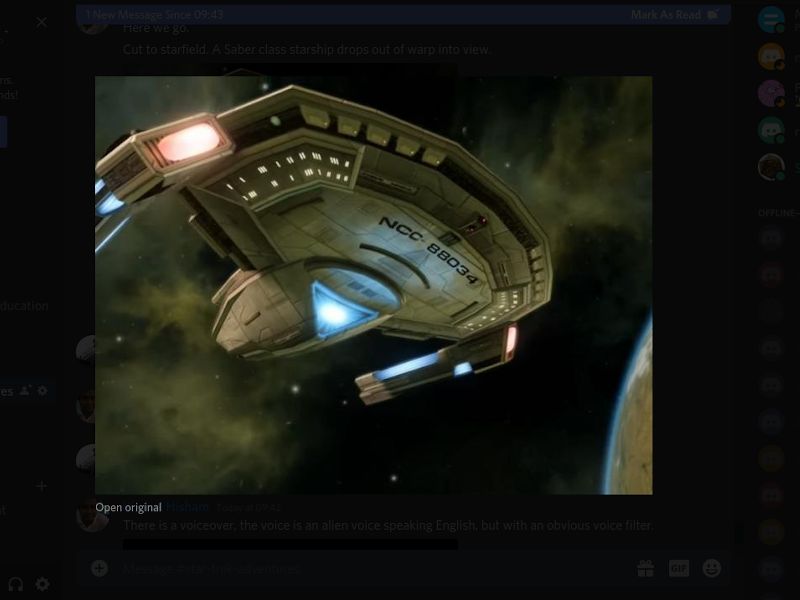 The Battle is Joined

“Aye, sir,” said Metaxis as she fired the thrusters needed to skew the Sienkiewicz to starboard. (The NPC roll resulted in one Success.) The disruptor beam dazzled the ship’s portside but did not even touch the shields.

Captain Toor said to Tamat, “Fire at will.”

Tamat confirmed, “Targeting weapon systems if possible, shield generators if not.” He acquired a lock, augmented by Miral’s sensors, and fired a phaser beam that seared the shields off the pirate starship. Sensors registered several minor explosions at their disruptor array. (This was a result of 3 Successes and one Complication, followed by 7 points of Damage.)

The Cardassian engineer said, “Perhaps now they will be more willing to surrender.”

Captain Toor hailed them once more, growling, “SURRENDER NOW, or our next shot will help you answer the age old question, What does space taste like?” (I rolled 3 Successes for Daring + Command, using a Momentum from the pool).

The pirates powered down their weapons immediately. However (because of the previous Complication) they spun and burned their impulse engines fiercely, fleeing the scene of the crime.

Tamat reacquired a target lock on their warp engines (aided also by his Focus of Warp Field Dynamics) and fired a second phaser beam (delivering a combined damage of 9). A bright flash bloomed from the pirate ship’s engines and it began to drift away from its original course. 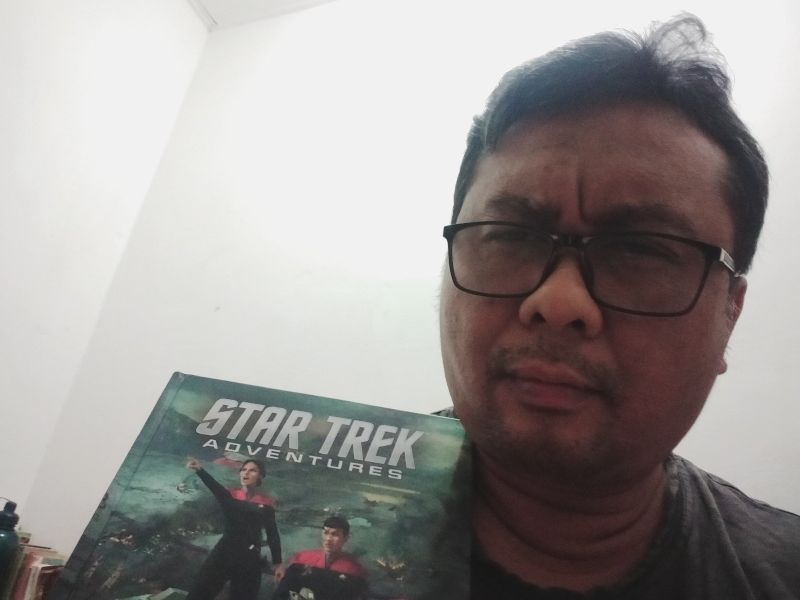 The online GM displays a book

The Game is Afoot

Her panel beeped and Fuentes said, “The Antares-class cargo ship is hailing us sir.”

“Fuentes, put them through,” said Tamat.

The woman on the viewscreen was in her mid 40s, with experience lining her eyes. Her black hair was braided down her back. She wore a civilian cargo ship’s uniform adorned by a captain’s badge. She said, “This is Captain Gulya Seidov of the cargo ship SS Rafflesia.”

“Thank you for saving us. We are still somewhat undamaged and can still warp out of here. How can we repay you, sir?”

“Captain Seidov, we are searching for one of our ships, the Nairobi. Have you seen it?”

“The Nairobi? We saw them 2 days ago in orbit around Delta Melpomene V. We briefly communicated. They were picking up archaeologists or something there. They said they found something amazing and this dig was going to be historic.”

“They said that there’s only one artefact they found and recovered on the planet and they’ve transported it aboard. They were going to return to Earth as soon as they were done — securing it properly.”

Toor said out loud, “Miral, you’re the science officer. What do you think?”

“Hm. Archaeology is not my specialty, captain, but I could take a look at the database.” Miral searched the Federation database for clues to the archaeological dig on the fifth planet of Delta Melpomene system. (Employing Miral’s “Innate Researcher” Value, Gabriel spent a point of Determination to achieve a result of 4 Successes!)

The LCARS interface scrolled to the correct directory and entries.

There was a pause of surprise at the word Iconian. Captain Toor turned to them and asked, “What is it? What have you found?”

Miral gestured over her panel and said, “Captain… I’ll send this to your chair display.”

Toor peered at his screen through his Zaranite visor, then looked at Tamat, whose screen displayed a similar readout. Toor muttered, “Do you know what this means, Mr. Tamat?”

The young Cardassian cocked his head and said, “As far as I know, Iconian technology is quite dangerous.” Both Fuentes and Metaxis turned to look at Tamat, their eyes widening with distress at the mention of Iconians. He flustered for a second, coughing an, “Oh!” He did not mean to startle anyone. 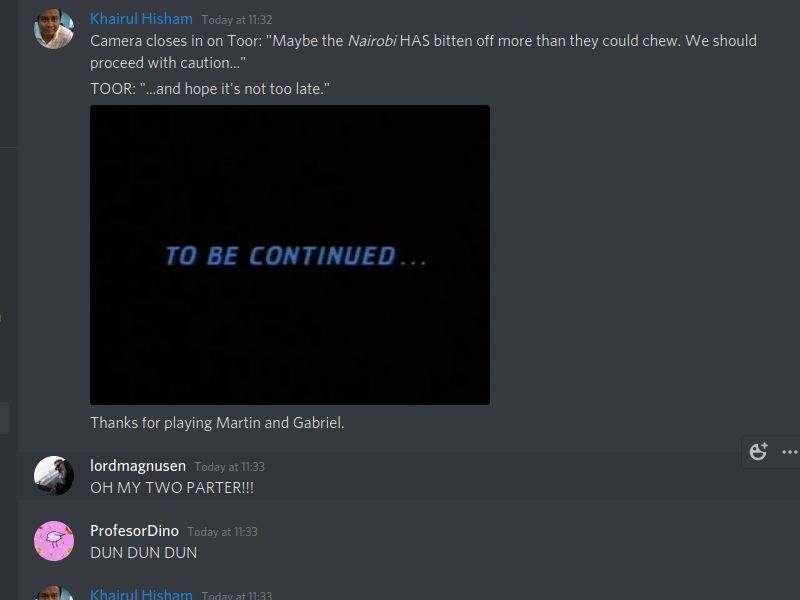 “Maybe the Nairobi HAS bitten off more than they could chew,” Toor commented. “We should proceed with caution – and hope it’s not too late.”