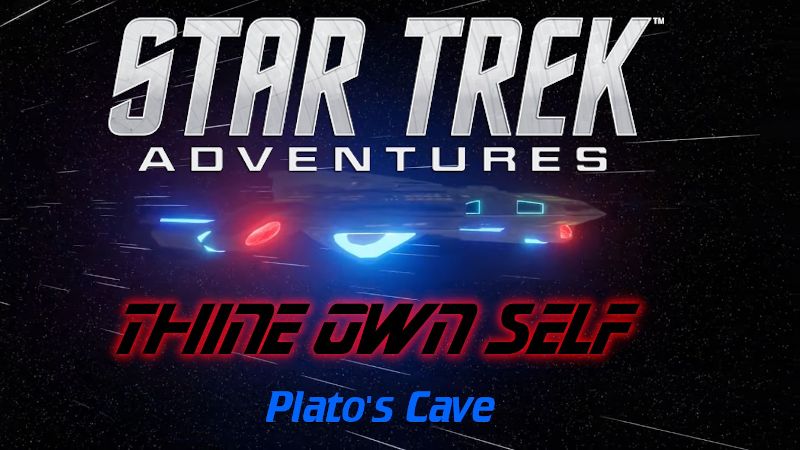 Last time on Star Trek Adventures: Thine Own Self

Previously, Lt. Tamat and Lt. Cañete rescued Lt. Cmdr. Mungar after his runabout USS Segura was destroyed by a huge and invisible tendril in space. The duo, piloted by Ensign Sparik, were looking for their own ship, the Saber-class USS Sienkiewicz, which had been looking for the missing USS Nairobi at the Great Mugato Nebula, the crew of the Danube-class USS Moonstar detected a distress call. They sped to the rescue of the USS Jemison which was under attack, and disabled in the gaseous walls of the nebula.

However, they discovered the futility of their task as they were interacting with time-displaced subspace communiqué. The Jemison had been destroyed more than a century ago. They were chasing ghosts.

Now that Tamat discovered how to detect the invisible mass of high-energy exotic matter using using the tetryon emission with the sensors sensors, they are able to scan the gaseous walls of the Great Mugato Nebula for the invisible tendrils.

The runabout Moonstar‘s sensors detect a cave in the nebula about five light years in diameter. 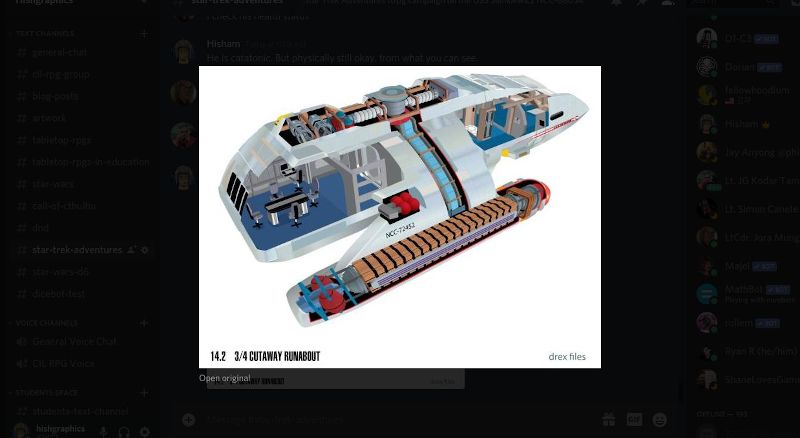 It was devoid of any nebular gases and there was a strong signature of high-energy exotic matter within it. At first, Lt. Cañete wanted to tow the Jemison in with them but agreed that it would be best to do so after finding the Sienkiewicz and the Nairobi.

Boosting the sensors, Lt. Cmdr. Mungar was able make a scan within the cave allowing them to navigate well into the “cave”. Mission commander Lt. Tamat asked, “Can we plot a course through the opening?”  They did so with little trouble (3 successes on Control+Conn with a successful assist by the ship.) 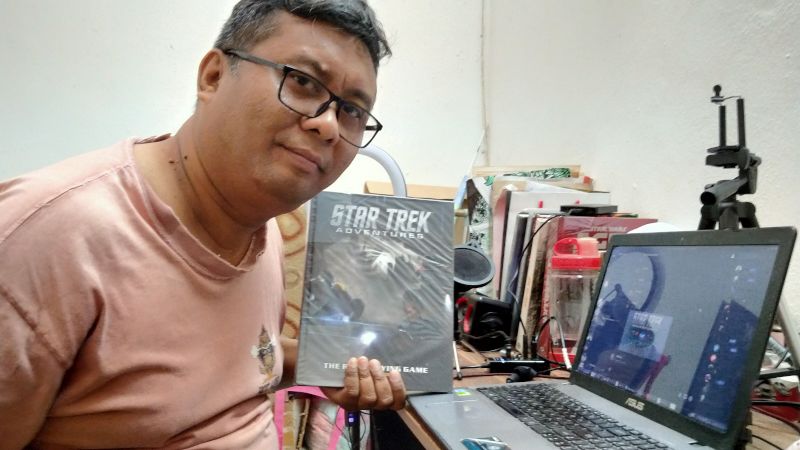 They set a course through an “entrance” in the nebula and discovered an enormous “cave” within. It was devoid of any nebular gases and there was a strong signature of high-energy exotic matter within it. The far wall was 5 light years away. There were a dozen red dwarf stars at various points in the wall of the “cave”. Tamat commented, “It’s breathtaking.”

Cañete said, “This is fantastic, but can it have applications?”

Sparik rubbed his temple in annoyance and said, “Where do we go, sir?” He had a strange tone to his voice.

With Tamat’s adjustment to boost the sensors using information about metreon radiation (2 successes plus a Power Systems Focus), Cañete managed to detect something (with also 2 successes plus an Espionage focus). He pulled up a false-colour display of a network of huge, gargantuan invisible exotic matter that would more than scrape the paint off the Moonstar should there be a collision. 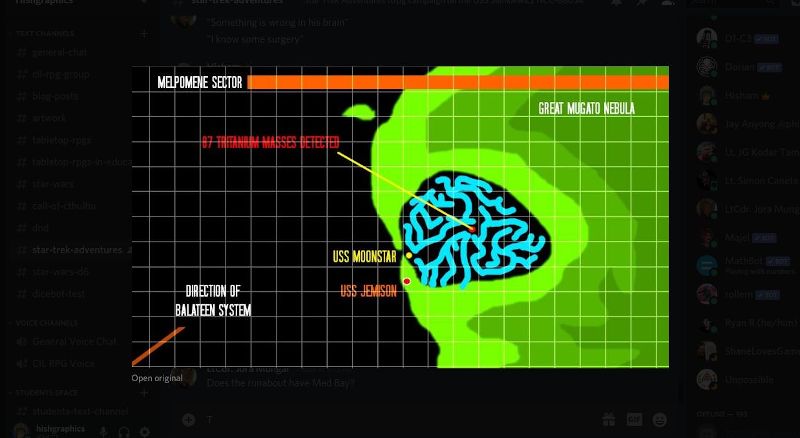 The StarCave of Mugato Nebula

The exotic matter cave network was baffling. There was a network of tunnels that would allow them to travel through it. The walls of the tunnels of exotic matter consisted of the same material as the tentacle that attacked the Segura earlier. It also seemed to be undulating slightly, as it were alive. The network seemed to originate from a dwarf star in the middle of the cave. Lt. Tamat said,”We’re going  to have to avoid those tendrils. Any sign of the Nairobi?”

“Ooooh, I know these tentacles. Not again,” said Mungar.

They curiously noted that there was a more-or-less straight passage from their position to the central red dwarf star where the sensors infomed Cañete of a cluster of dozens and dozens of tritanium masses orbiting the dwarf star.

Mungar plotted a course through the tunnel towards the dwarf star three light years away Then Sparik suddenly exclaimed, “There’s a clear passage from here to there. What is this? Is this some sort of a trick? I hate this!”

Tamat asked the now-sweating Vulcan pilot, “Sparik, are you alright?”

When Canete said, “Sparik, what should we do to avoid this?” Sparik turned to the security officer, about to fire his Type-2 hand phaser. Tamat (with a Control+Security roll with 2 Successes) kicked the phaser out the Vulcan’s hand. Sparik turned and struck Tamat’s solar plexus (felling the Cardassian with -2 to his Stress). 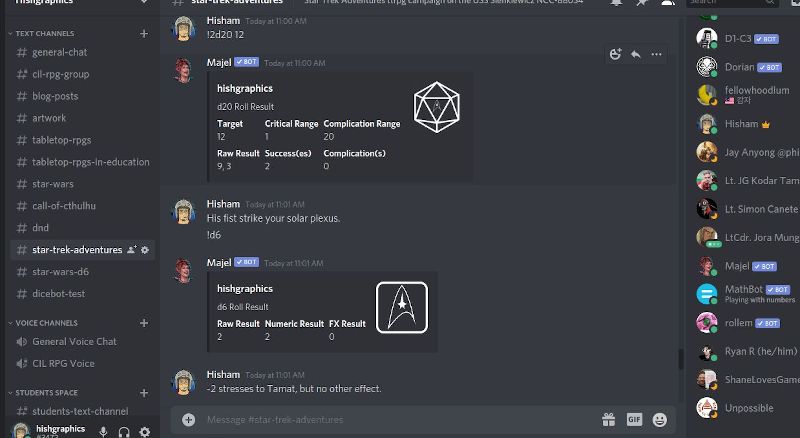 Mungar jumped Sparik and managed to restrain the Vulcan. Tamat winced in pain, “He’s obviously being affected by something in the nebula!”

Sparik screamed in agony for no apparent reason then fell unconscious. Although he was still breathing, Tamat’s tricorder registered him as catatonic.

They replicated some restraints and carried him back to the passenger compartment. Mungar’s medical tricorder found that Ensign Sparik’s vital signs were good, but his brainwave pattern was erratic. It was unlike anything in the database.

The onboard medical scanners tried their best, but it was not good enough.

NOT ENOUGH DATA. UNABLE TO COMPUTE.

They decided against surgery for the time being. Tamat suggested they head for the tritanium masses for a better read. Perhaps the Sienkiewicz was there. Mungar said, “If this can happen again, we should prevent it.”

Tamat hypothesised that Sparik was affected, or was affected faster, because of his Vulcan psychic abilities.

Cañete quickly blurted out, “Is there anyway we can block the effects of the nebula? Maybe with a helmet of sorts?” the same time the Trill officer suggested, “I propose to replicate some special helmets to block any radiation or whatever to affect our brains.”

Using whatever knowledge they had of the radiation topology of the cave, they designed a helmet. The replicator made one helmet for each officer, including Sparik. It looked quite unorthodox and their names were stencilled on them. 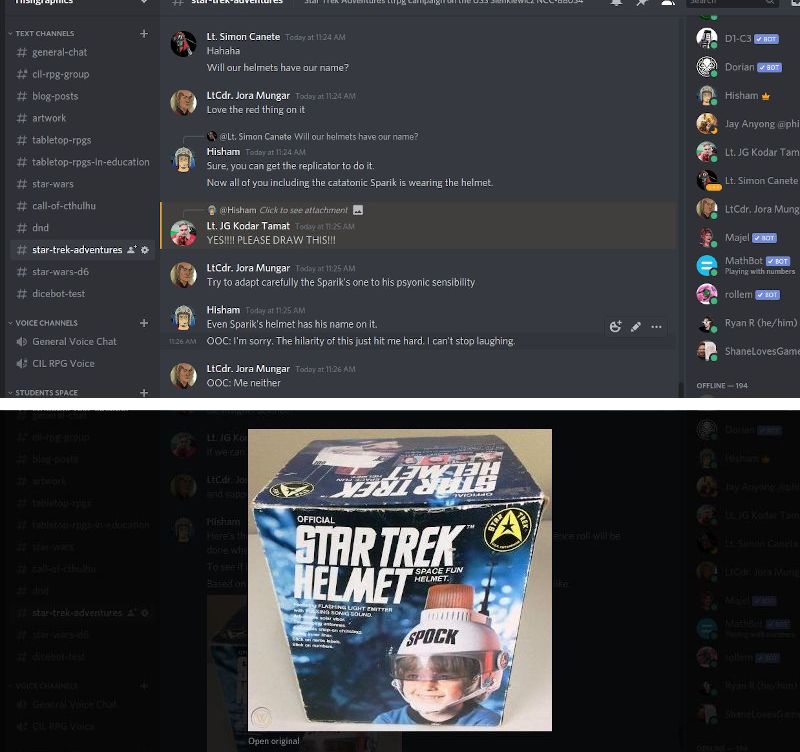 With everyone wearing the helmet and the red revolving light on top of it flashing, they returned to the flight deck. The Moonstar flight computer seemed to be able to maintain a warp field from their present position to their destination because of the suspiciously clear passage.  Tamat ordered, “Slam it!”

Nothing happened because Sparik was not at his conn station. Mungar grinned and took the station, saying, “I got it.”

“That ruined my command catchphrase,” muttered the Cardassian under his breath.

The Moonstar jumped into warp.

When dropped out of warp not long after, a gigantic globular object blocked their path. The proximity alarms blared while the flight computer was overwhelmed by the size of the object. The Trill pilot (rolling 4 Successes on his Control+Conn plus a Helm Operations Focus) skilfully swerved their runabout from a violent collision ignoring the Moonstar‘s navigation error alarms. 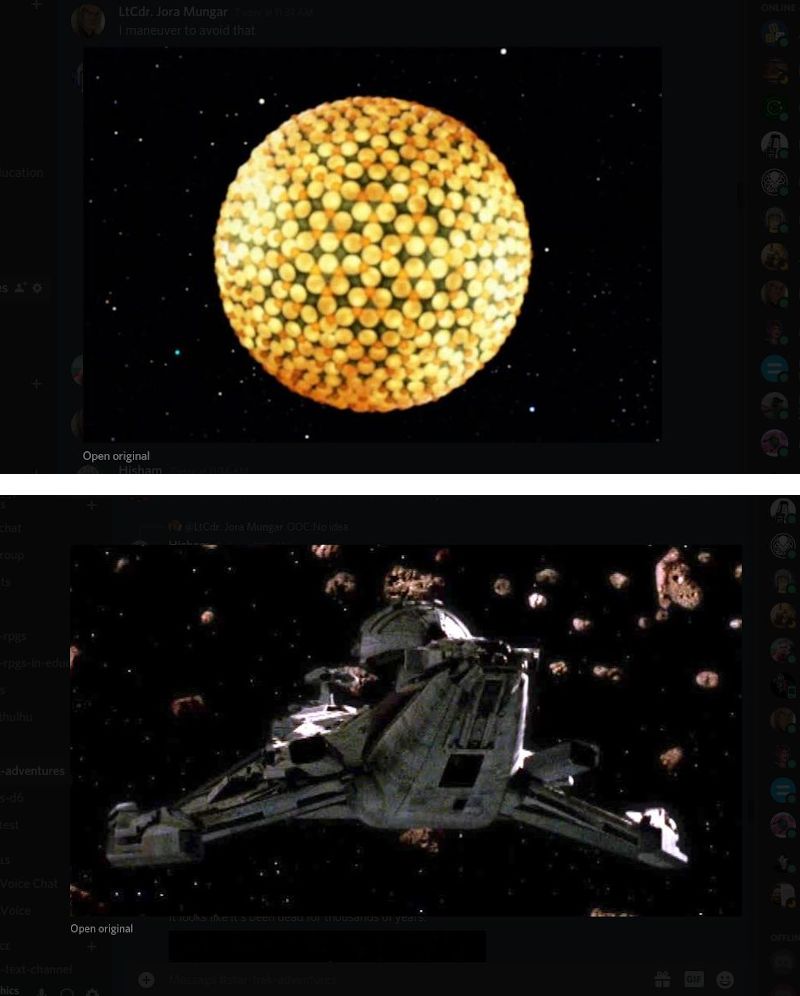 They looked at the sensor readings and realised that they almost collided with a starship of the First Federation. It looked as if it has been dead for a thousand years. Further ahead the sensors detect a 22nd century Klingon vessel. To one side, there was an Starfleet Einstein-class starship from the early 23rd century. The sensors also registered what appeared to be an ancient Promellian warship.

“We found them,” said Tamat with a caution smile. “Open hailing frequencies.” 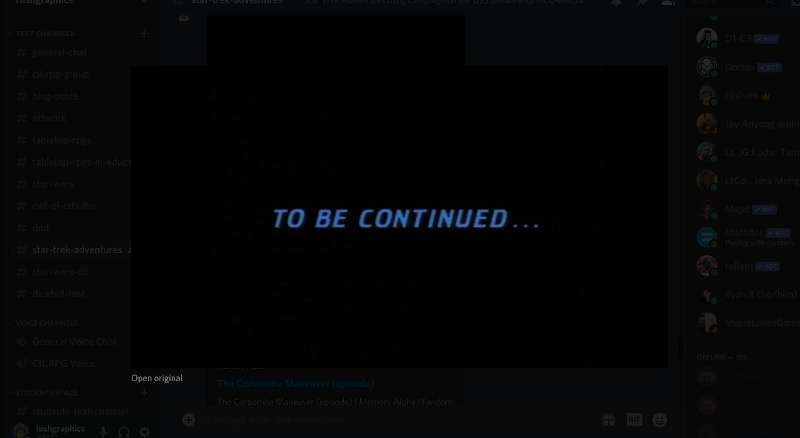