Bear McCreary has become my favourite composer for soundtracks. I love what he did throughout Battlestar Galactica. The music isn’t a traditional symphonic orchestral score, although it is in some places. I can’t quite categorize listening to the score as a whole. It has string quartet, Japanese tako drums, Armenian duduk, bagpipes, gamelan, erhu…. a hodge-podge of traditional instruments being used to make the music of the Battlestar Galactica universe. Lyrics are sung in languages like Latin, Sinhalese, Sanskrit and Italian. Modern earth music even make their way into the episodes as source music, such as Philip Glass’ “Metamorphosis Five” (played by Starbuck at her Caprica apartment) and the super spoiler full-blown music which rocks the closing scenes of the recent third season finale, which broke my mind in half.

Anyway, Bear McCreary’s website has a blog and the blog has entries pertaining to his work on Galactica, which also includes very simple notes of the themes he composed for various characters and situations in the series.

Here’s the “Wander My Friends” theme (the Adamas’ theme) 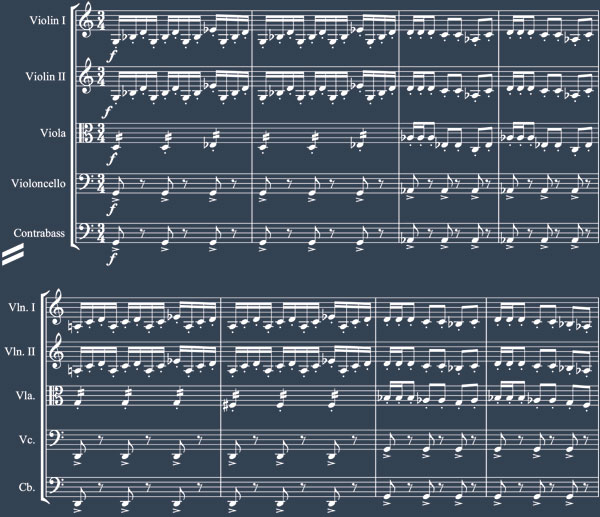 Galactica & Pegasus Standoff (anyone with the full instruments willing to give this a shot?)

More where that came from at its source. Check out Bear McCreary’s blog archives.