Episode 07 Battle Among the Clouds

A CRY FOR HELP FROM IGMALAR! Drew Greyhelm received a signal from Rebel spy Ooogle Flutzgle at the swamp planet of Igmalar in the Enteague Sector. He had important information for the Alliance. Fresh from their mission to Belderone, Shanna Toarninar the bounty hunter and Viveede Briylle Colore the star pilot were assigned to meet the spy in Igmalar City to assess how dire this information was.

Viveede set the Nexus Point down in Igmalar City under a false ship ID. The city administrated the harvesting and processing of pharmaceutical materiel from the swamps of the planet and was crawling with Imperials. The local sapient species were the Grenben, who once built the city on a tall, flat mesa that towered over the rest of the swampland, and had been reduced to slaves in their own homes by the Empire. 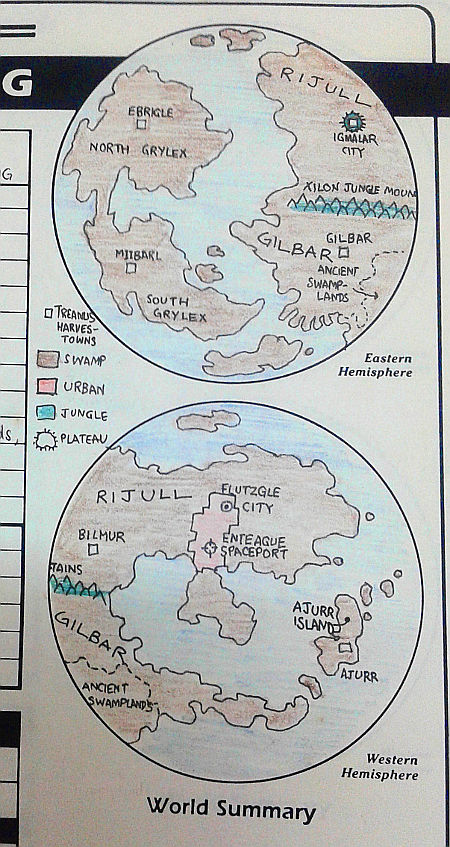 Their spy and informer Ooogle Flutzgle was a Grenben, a tangle of prehensile vines, leaves and nodules that had been bunched up and shaped into a humanoid containment suit. Like most Grenbens, he wore a macrobinocular sight enhancer fitted onto sensory nodules his hooded mask, photosensitive plant cells enhanced to be their eyes.

Shanna and Viveede found Ooogle in the dark and dingy Blixx Alley, flustered and distressed. The Igmalar native had intercepted a transmission from the Imperial Star Destroyer Detonator, which had been sent to the Driscall system to attack the floating Rebel outpost in the skies of the gas giant there. The outpost was not prepared from the attack and their databanks held many classified information of Rebel activity here in the Enteague Sector. If the databanks fell into Imperial hands, many Rebel cells, cache and safeworlds, and major outposts like their own on Enteague Minor would be discovered and destroyed!

They would not have time to relay the data to Enteague Outpost so Shanna and Viveede had to warn Driscall outpost themselves.

They thanked Ooogle and headed back to the Nexus Point.

En route, a stormtrooper accosted them at the landing bay. The trooper attempted to test his own perception by searching the Point for illegal weapons. Fortunately for the two Rebels, his senses were just as bad as a Sljee with a flu.

Once the Nexus Point soared out into space, leaving Igmalar behind them, the Imperial Customs Frigate Tormentor made a move to intercept them in orbit. A crummy random inspection! Viveede feigned compliance, but as soon as calculations were made, Shanna pulled the hyperdrive levers and the Nexus Point launched itself into hyperspace.

The Ghost Town on Driscall!

The Nexus Point, upon detecting no Imperial Star Destroyer in orbit, glided between the blue skies above and the pinkish-white clouds below. The gas giant Driscall was primarily a tion and petroleum mining world. The planet’s “life zone” was a naturally formed nitrogen-oxygen atmospheric strata with a depth of fifty kilometres. Viveede detected the Rebel outpost and flew towards it.

The outpost, substantially smaller than the ones on Enteague Minor and Kendell, was an abandoned and converted tion gas mine floating steadily above the clouds. No twin-pod cloud cars came forth to greet them despite them transmitting the proper greeting codes. Videede did a flyby and noted that the floating city was devoid of any visible occupants. It was empty.

Disembarking on platform 152, the Rebels began exploring the empty rooms and corridors with weapons ready.

All of a sudden, they were ambushed by stormtroopers. Apparently the Detonator had come and gone and left a detachment of troops behind. The duo fired back as they made their way toward the base’s databanks. They had to either scavenge it or destroy it.

Then, a towering Eliminator 434 assassin droid blocked their path, impervious to their blaster fire! They both retreated from the mechanical menace as Viveede threw a grenade at it. The fiery explosion threw everyone off balance. The flames died. The smoke dispersed. And the 434 strode ominously out of the flames and with only a smoking, slightly scarred chest.

Shanna and Viveede turned tail and ran with renewed vigour as blaster bolts lanced out toward them.

In their haste, they failed to spot an open maintenance hatch on the floor and tumble down into it. They both slid down a dark tunnel which deposited them with no injuries in a badly-lit chamber with rusted walls, filled with innumerable droid parts.

To their surprise, one droid husk spoke to them: CC-42V (or CeeCee), a bipedal cloud car pilot droid, with a missing left leg below the knee. CeeCee told them that his counterpart, the astromech droid R2-D9 lay inert in the junk pile and asked them to help reactivate Artoo who could repair CeeCee, and they both could guide the Rebels out of the floating base.

Shanna and Viveede employed their droid repair skills to reactivate Artoo, who after being briefed by CeeCee, located a spare leg from the pile of droid parts and attached it to his friend’s knee. The two droids had blaster scoring on their bodies. CeeCee told them that they were hit when the Imperials attacked and he had no idea whether the remaining Rebels at the outpost survived, escaped, were captured or killed.

CeeCee and Artoo led Shanna and Viveede deeper into the city. They were brought to a pair of Bespin Motors Storm IV twin-pod cloud cars berthed at a docking pylon by the side of the outpost. They carried Artoo into the cockpit of one pod while CeeCee prepped both cloud cars for launch.

Suddenly, the door opened and some stormtroopers attacked. The Rebels held them off as the cloud cars Quadex power cores rumbled to life. Shanna flew with CeeCee while Viveede with Artoo. They swooped out into the cloudscape.

From atop the outpost four TIE fighters chased after them. CeeCee and Viveede skillfully evaded the green cannon fire for hundreds of kilometres before a volley of red energy bolts flashed down and took the pursuing fighters apart.

A pair of Incom T-65B X-wing fighters appeared from the cloudscape to greet them. The lead pilot known only as Yellow Leader escorted them to a hidden surveillance outpost where the survivors of Driscall base were hiding.

Their de facto leader was Major Tlixane. At their makeshift briefing room, the Major told them of his plan to destroy the invaded Driscall outpost because when the Detonator returned she would bring with her a team of Imperial Ubiqtorate Cryptanalysis team to break the databank encryption.

To Destroy a Rebel Outpost!

Yellow Squadron X-wings launched into the air, coalescing in attack formation with the exception of two trailing X-wings: Shanna’s and Viveede’s.

When the attack began, Yellow Leader personally covered the duo’s approach with his wingtip cannons. The imperial detachment was taken by surprise, unaware that there was a sizable Rebel force left on the planet. Yellow Leader’s cover fire caused enough chaos to allow Shanna and Viveede safe landing on platform 47.

Artoo then led them both into the outpost. Shanna and Viveede blasted away any troopers in their path and on their tail. Because of Artoo’s familiarity with the location, they quickly found themselves at the main reactor control room. Artoo plugged himself in and commanded the system to shut down the cooling modules, bypassing any failsafes. Then they headed back up.

Suddenly, they were face-to-face once more with the Eliminator 434 assassin droid they had fought before. Its grenade scars were still visible. They turned back and looked for an alternate route. Artoo guided them onto bridge over a large chasm which opened up to the clouds kilometres below them. The 434 caught up with them.

They fired at the droid, but it absorbed the damage dealt by their blasters, shrugging off the energy bolts in bursts of bright sparks and smokes. The 434 then began to sprint at them. There was no way they would reach the end of the bridge before it reached them.

A violent explosion rocked the outpost!

Shanna and Viveede both lost their balance and fell off the bridge into the chasm and the waiting clouds below. Artoo peered left and right and at the 434 which was getting back on its feet. Then Artoo rolled off the cloud to join Shanna and Viveede, a long electronic scream trailing behind him.

Soon, the three of them were out of the chasm and falling through the sky beneath the outpost. The blue skies were dotted with fighters in combat, flashes of explosions and lances of energy bolts. Soon they would leave the battle above them, fall into a cloud layer without a breathable atmosphere and asphyxiate.

Suddenly with a great roar a familiar shape of the Nexus Point swooped down from above, its entry ramp was open and the freighter flew dangerously close to them and matched the velocity of their fall.

Shanna drifted to the ramp and pulled herself on, followed by Viveede who then grabbed Artoo. The ramp closed around them safely.

In the cockpit was Yellow Leader who had ejected after his fighter was shot down. He parasailed right onto platform 152 where he found the Nexus Point. The Nexus Point pulled up and sped away from the combat zone, with X-wings flanking it after they finished off the last of the defending TIE fighters.

As they accelerated away, there was a flash of light and the outpost disintegrated in a sphere of superheated gases.

They returned to the surveillance outpost where Major Tlixane congratulated them on a job well done. Then the Driscall survivors packed themselves into the Nexus Point and led the remainder of Yellow Squadron back to Enteague Outpost.