After their mission to Driscall, bouny hunters Shanna Toarinar and Ace Browning Crossfire along with the pirate Phoenix Avalon were assigned a new pilot, the Quarren hot dogger ace Dorniekke Nels and a temporary member, the elderly former Imperial Star Destroyer Captain Robetre.

Their commander Drew Greyhelm informed them that one of their spies Cal Tynblade had discovered the location of the Imperial transport Rectifier packed with weapons and supplies which had been lost in the Kolben Asteroid Field. They were to commandeer it to the rebel outpost on Liesson for Alliance use.

The Ambush at Kolben

The Nexus Point, piloted by Dorniekke, entered the Kolben field while Ace scanned for the location of the Rectifier. It had been parked in a cave in a large asteroid. Ace and Phoenix donned spacesuits, cycled the airlock and pushed out toward the asteroid in space.

As they close in on the asteroid, three Zero-G stormtroopers a.k.a. spacetroopers, Imperial troops in powered armour, broke cover and began firing at them with their suit cannons. Under fire, Ace and Phoenix fell back to the Point. Four TIE fighters appeared from behind the asteroid. Dorniekke turned and piloted the Point out of the field, evading rocks and cannon fire.

Once they had cleared the asteroids, Shanna pulled the hyperdrive lever and the ship jumped into hyperspace.

They arrived at Liesson empty-handed.

Liesson was an ocean world dotted with merely hundreds of tiny islands the biggest only a kilometre long. Liesson Outpost was a starfighter base much like the destroyed Kendell Outpost. It was a wide, five-story structure floating on the surface of the ocean. They quickly located it using the location code 355-Z that Tynblade had provided earlier. 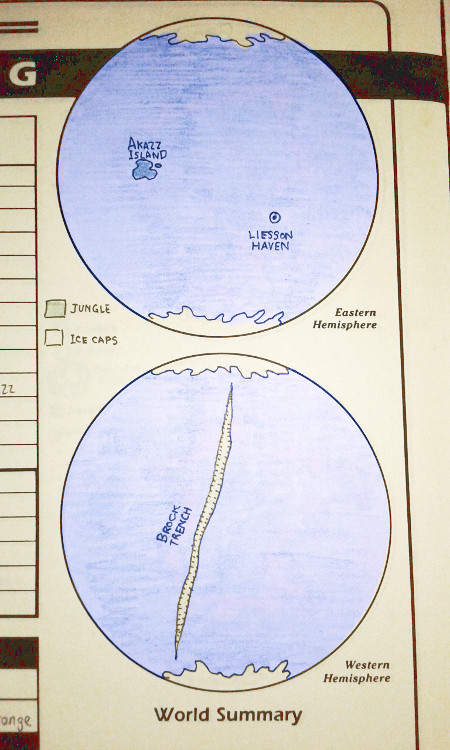 Dorniekke set the Nexus Point down in a hangar bay at Liesson Outpost beside five Incom X-wing fighters and one TIE fighter hanging from its ceiling rack. Liesson Outpost, they discovered, was deserted. Where was everyone?

Dorniekke led the team out of the hangar bay with weapons ready.

They arrived at a T-junction. Dorniekke wanted to go left. But Ace wanted to go right. They argued for a bit, then finally decided to turn left. Dorniekke walked into a booby trap. The blast tore up the corridor, but the team was unhurt.

So they turned right.

Suddenly they were face-to-face with a black-clad, pale-skinned Twi’lek wearing a perpetual, malevolent grin. Who was this guy? He identified himself as Dik Foranay – an assassin for hire – who claimed that he brought the Empire to Liesson, captured or killed everyone on Liesson Outpost and set a trap for the Strikeforce Enteague!

The team drew their blasters and fired at Foranay. An Eliminator 434 assassin droid appeared out of the shadows and proceeded to protect him, laying down cover fire at the rebels as the Twi’lek retreated into the shadows taking his annoying grin with him. Unable to defeat the tough droid, the team retreated back to the Nexus Point.

But then from the hangar bay, they discovered the trap that Foranay had sprung. A turbolaser bolt struck the city, rocking it. The bolt came from an Imperial Star Destroyer that was approaching Liesson base at a steady altitude of about two hundred metres. They would not have the time to escape.

So they climbed into the cockpit of the X-wings, which they discovered to be the new T-65C-A2 variants, and soared out of the hangar bay into the blue sky, evading turbolaser and anti-starfighter cannon fire. Robetre told them where to target their torpedoes as they closed in through the flak. A single bolt struck Robetre’s fighter, but he regained control before catastrophe occurred.

Before the Imperial survivors could regroup the X-wings were back in the hangar bay and the Nexus Point had taken off for space.

When the freighter was passing low orbit the team received another transmission from Tynblade: They were to jump to the Caeyern system, rendezvous and pick up Chrome Squadron pilot Slash Frakes from the derelict Victory-class Star Destroyer Stormblower.

The team knew Frakes, an X-wing pilot also stationed at Enteague Outpost and he knew them.

Caeyern was a field of dead and derelict starships and space stations located just outside the Enteague Sector. The field formed a ring around the lifeless planetoid Caeyern. The team quickly located the inert hull of the Stormblower and tried to hail Frakes. There was no answer, except for the sudden powering up of the capital ship! It was not a derelict!

When the ion cannons began to pelt them with blue fire, Dorniekke had turned the ship around and they jumped into the safety of hyperspace.

It was then they received a communique from Drew Greyhelm informing them that Cal Tynblade had been revealed as a double agent working for the Empire. He had been sending the Strikeforce Enteague into traps to capture them. He might have been behind the fall of Kendell, Driscall and Liesson Outposts! Greyhelm ordered them to apprehend Tynblade at his homestead on Tatooine which doubled as his listening post.

The team was happy to oblige.

The Capture on Tatooine

Tatooine was in the neighbouring Arkanis sector and was the one the route out of the cul-de-sac that was the Enteague Sector. The Nexus Point set down beside Tynblade’s homestead, which was a plastisteel dome affixed with multiple antenna arrays in Drywater Valley, east of the Dune Sea.

They searched the empty house and discovered an underground passage which weaved left and right confusingly. Soon they reached a submerged portion of the tunnel and they waded across one by one waist deep in brackish water with a layer of froth. Ace was the last across and Ace was grabbed by a miasma of tentacles from underwater.

It was a slatchin, a large anemone-like underwater creature with ropy tentacles strong enough to ensare an adult human and pull him towards its large open toothy maw. Ace saw the maw and fed it an hors d’oeuvre: a tasty grenade which made the slatchin lose both its appetite and tissue cohesion in a big, loud bang. Ace wiped the slatchin goo off his leather jacket and kept moving.

Dik Foranay was waiting for them with his evil smirk in a chamber. He closed in for an attack, but Ace – still dripping with slatchin guts – intercepted him and punched him across the room. The Twi’lek fell into a hole in the ground and disappeared.

Phoenix told him Ace to ignore Foranay and continue their hunt for Tynblade.

The tunnel continued on. It sloped downward a bit. Then it sloped even more. Then the rocky floor became a smooth stone surface. They slope was becoming more acute. They tried to turn back but it was too late. The floor had become a wall in a vertical shaft and they fell.

The five of them fell on a pair of Imperial stormtroopers knocking them out. They could see a cave entrance, a Mobquet landspeeder and one Cal Tynblade frozen in place in an attempt to fit his luggage into the speeder, obviously attempting flee with the Imperials.

Tynblade looked at them for a moment. Then he drew his blaster. The rebels were faster. Stun bolts struck the double agent and soon he was bound up at the back of the speeder as the rebels drove the speeder out of the cave and back to the homestead where Nexus Point waited.

Their mission accomplished, the team returned to Enteague Minor.