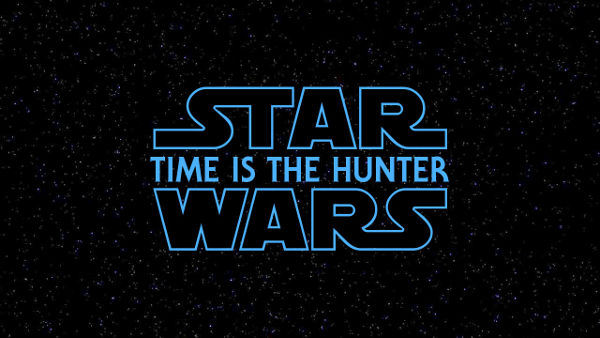 Time is the Hunter intro title

Last time on Star Wars Time is the Hunter, a gunfight between bounty hunters accidentally activated a trio of Separatist BX commando droids from the Clone Wars. Malfunctioning, they began hunting for targets deep in the bowels of Spaceport Tower 214 on level Brown-212 in the Byblos system.

The three rusty droids fanned out with vibroswords drawn, their joints sparked when they moved jerkily. “Kill all Republic clone troopers.” “Roger roger!”

Jax Hunt hugged the debris-strewn floor behind the engine of a Y-wing fighter. Beside him, a fellow bounty hunter – the Nimbanel named Tulon Tash – lay injured and semi-conscious after being shot by a rival hunter. Meanwhile the furnace behind both bounty hunters illuminated the chamber of scrap metal and discarded technology with angry colours.

Jax considered throwing one of the two grenades he was authorised to carry, but the droids were too far apart for it to be effective. 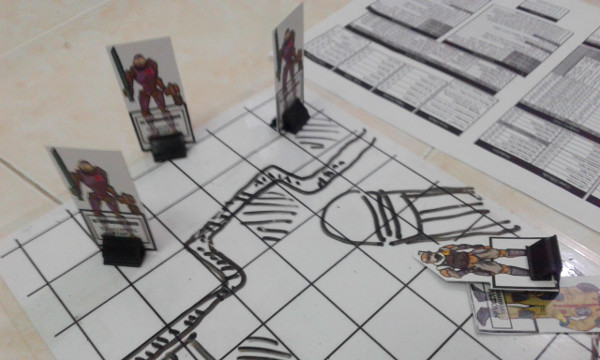 Flat in front of the furnace

Then he had an idea. He grabbed the nearest piece of scrap he was able to – a keyboard from a control panel that was broken in half – and hurled it up above their heads and down the corridor to the right where it clattered out of sight.

The three droids jerked their head in that direction. “Probable clone trooper.” “Investigate and destroy.” “Roger roger.” And then they were gone.

Jax searched Tulon for a medpac but found an unmarked datacard instead. He pocketed it for later inspection. It was imperative they leave quickly before the droids wandered back.

“Come on, Tulon.” Jax supported the Nimbanel as they hustled toward the elevator doors down the left end of the corridor. Jax noticed comm jammers stuck to the wall of the corridor. They appeared freshly fitted. He studied the closest jammer but could not figure out how to turn it off (with a Technical skill failure 11/12).

Jax and Tulon were several metres from the closed doors when a mechanical voice behind them boomed, “Republic clone trooper! Destroy! Kill!”

One of the BX droids had doubled back. 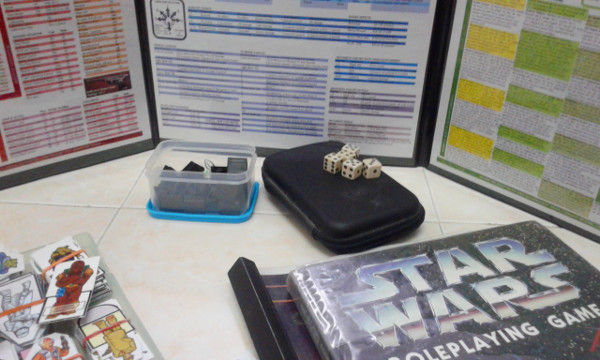 I actually referred to the tables more than once this session

The droid charged from the other end of the corridor with its lethal vibrosword pointed at Jax and Tulon.

Jax had his Relby-k23 blaster already in hand, so he raised it and fired at the approaching droid. And missed. (He rolled 14 for his Blaster skill for a Difficulty Number of 15.) Standing his ground against the oncoming killing machine, he fired again and his red blaster bolt struck the droid’s shoulder resulting in a miasma of sparks. (Blaster 18/DN 10) But the droid maintained his running speed (because of 10 Damage roll against the droid’s 7 Strength roll) and closed the gap.

The droid raised his sword for the kill as it was about to reach them. Jax wavered not, aimed and sent a bolt right through the BX’s chest sending smoke, flame and molten metal out its back. (Blaster 23/5, Damage roll with a bonus +1D 18/5.) The BX was a smoking heap of scrap.

“Come on,” Jax turned and hit the elevator door button. The door opened and an insectoid Verpine stepped out, causing Jax to point his blaster at the newcomer. His hands up, the Verpine introduced himself with a drawl, “Whoa, there. I’m Arbo Kee of House Benelex, the same Bounty Hunter Guild you are.”

Jax carried Tulon past Arbo who turned to face him as he let Tulon down onto the lift cab floor. “We have to get out of here. Tulon is hurt and we don’t have any medpac. We have to get him help.”

“Just a minute here,” Arbo wheezed. “What are you talking about? What about the bounty?”

“There are commando droids here, from the Clone Wars and they-”

A vibrosword burst through Arbo’s chest from behind, sending green bodily fluids flying.

“NO!” Jax yelled. He did not hear the second commando droid approach. Past its shoulder, the third commando appeared at the far end of the corridor and began sprinting toward them. 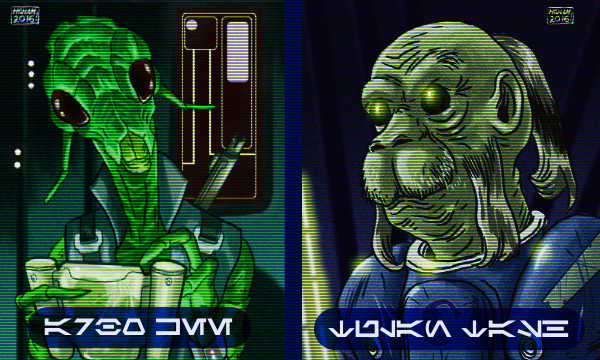 Jax had an easy shot at the second BX because its vibrosword was stuck through Arbo’s torso. He pulled the trigger and the droid’s left arm flew off like a meteor. The third BX was halfway through the corridor.

The second BX slid its sword out of Arbo who crumpled onto the floor. It swung its sword and would have decapitated Jax if it were not for the lift doorway which caught the sword. Jax elevated his blaster slightly and blew the droid’s head clean off.

With the remaining droid almost upon him, he swiftly grabbed the incapacitated Arbo and pulled him into the lift cab while hitting the control buttons. The door closed. The BX slammed into the doors yelling, “Kill the clone trooper!”

The lift cab began to move, not up but down. Jax had hit the wrong button in his haste.

There was a sudden clang of metal on the roof. A second later a vibrosword blade sliced down through the ceiling in an attempt to stab Jax (who rolled a Dodge 16/5). He quickly hit a button to stop the lift at the next level and the sword punched through the ceiling again, still missing Jax (Dodge 24 thanks to a Wild Die of 6 against DN 10). Jax ran out of the cab, each hand dragging one unconscious bounty hunter out with him.

There was the sound of metal being torn and bent. The final BX commando droid was about to open up the lift cab like a tin can, jump down and kill them all. Should he use his blaster or his grenades?

Then it came to him. He stepped into the lift cab for a second and risked an upward glance Yes, the scary droid was tearing metal apart and bending it up with its bare hands. Jax then hit a button and immediately jumped out (with a successful Jump roll). The lift cab plunged downwards and disappeared into the darkness.

The Exploration of Brown-265

The markings on the wall indicated that Jax was in a service tunnel in Brown-265, even deeper than where they were at Brown-212. The walls and ceilings were lined with electrical cables and conduits. For some reason, the floor was damp. He dragged the other two for five minutes until the tunnel opened up into a larger cistern. Water flowed from the left and right and was drained out in the middle of the chamber.

(At this point, Irfan rolled a 15 for Stamina, succeeding against a Difficulty Number of 8.)

Jax decided to search Arbo for a medpac, but failed. Suddenly he remembered the datacard in his pocket. He slid it into his little datapad which had been stored in a belt pouch. There was a text file inside.

MESSAGE DECRYPTED: The Skywalker has been helping young children whose parents and guardians have died to escape the Empire. Capture the Skywalker and his effort to undermine the Empire will cease. If he resists, kill him. You will be equally rewarded. Good hunting.

No mention of who had sent the text message to the bounty hunters, but it was not the Benelex House.

Deciding to leave the unconscious bounty hunters for the sake of speed, he headed up the water tunnel on the right hoping he would find a quick way back to civilisation or at least a medpac somewhere. However, he found himself on the threshold of a vast dark chamber. It was more than two hundred metres in diameter and it extended further downwards into darkness. If Jax fell, he would not survive.

In the middle of the chamber was a large tree which rose from the darkness below. It was nearly cloaked in shadow. An unlikely primitive rope bridge connected the tunnel opening to the tree. The bridge slightly swayed ominously. 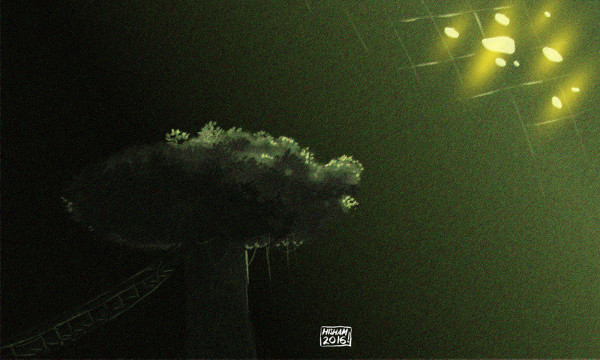 A creepy tree in the middle of a dark cavern deep under a city. Nope nope nope

Nope. Jax spun nervously and speedily returned to the cistern.

He went down the left tunnel and quickly found a long-abandoned stairwell. He quickly returned to his companions at the cistern and pulled them – each with a single hand – to the stairwell and slowly lugged them both up the steps.

Each landing presented a door, but Jax refused to open any of them. He kept climbing with his patients – still looking for a medpac. He was surprised that he was not fatigued by this endeavour (after rolling 20/10 and then 21/13 for Stamina).

Then, he stopped. Above him a huge metal structure had crashed through the stairwell and had completely blocked the way up. All around Jax were debris presumably from the disaster. He headed for the door which was stencilled with Red-107 and tried to open it. Discovering it locked, he hotwired the control panel and hoping it still had power from the city above.

“The level numbering here does not make sense,” he muttered to himself (and out-of-character too, I might add).

There was a spark and the thick door slid open. (Security roll was barely made at 10/10.)

Over a dozen heavily-armed individuals – organics and droids – crowded the hallway before Jax. They all spun toward the opened door, their blasters trained on him. 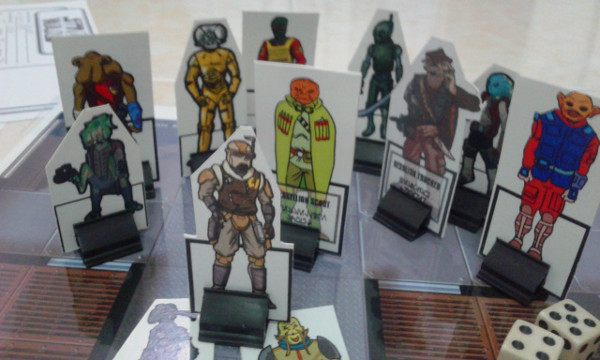 “Who are you?”, asked a pruned-faced Dressellian, apparently their leader, who pointed at the comatose bodies behind Jax. “Is that Arbo Kee? Tulon Tash?”

Jax quickly explained, “I’m Jax Hunt, a bounty hunter. We were hunting for this bounty called The Skywalker. These two were injured. Do you have medical help?”

The Dressellian signalled a Dug – who sprinted forward with a medpac to treat the injured duo – and put an arm around Jax. He said, “We’re bounty hunters. We’ve formed a posse looking for The Skywalker also. We have discovered where his hideout is here on Byblos and we will now go to apprehend him when he returns soon.”

“You will follow us and help us on this hunt. We’ll kill The Skywalker and we’ll split the bounty.”

Jax was torn. This was a job, but now he had discovered that The Skywalker was saving refugee children. If he helped the bounty hunters, would the children be captured?

The Dressellian shook Jax’s shoulder with both hands and smiled, barking, “Come my lad! Let us finish this like bounty hunters!” 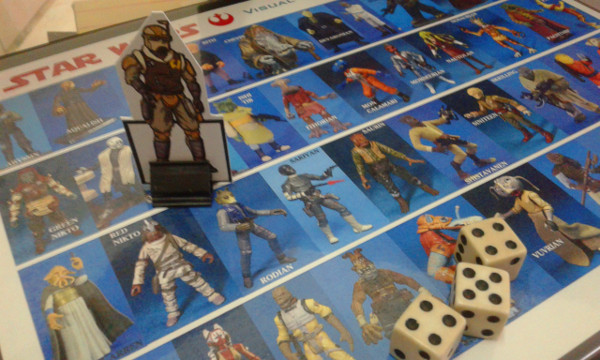 Time for a hesitant hunt

Veiling his disquietude, the rookie Jax Hunt turned to join the bounty hunter posse, descending deeper under the city.