Contacts in the Dark Episode 1

Some time after the abduction of Viveede Colore and Akela T’sing during their mission to Igmalar,  Commander Dominic informed Drew Greyhelm that Alliance High Command had a mission for him. An Imperial Ubiqtorate temporary encampment on Tatooine had discovered the locations of four rebel bases. The locations involved were the Enteague Outpost, the Tierfon Outpost, the Cratertown cell on Ord Mantell and the Outer Rim Communication Centre on Generis.

The Imperial Ubiqtorate agents, supported by a platoon of stormtroopers, were waiting for the recall signal for them to relay their information.

Contacts in the Dark title

Drew’s mission was to stop this data from being transmitted with three rebel agents from the Cratertown cell. The trio will rendezvous with him in Cloud City on the gas giant planet Bespin. The team of four would next travel to Tatooine to meet their guide codenamed “Wormie”. This agent would be waiting for them in Mageye’s Chasm near the north magnetic pole of the planet Taboon.

Finally, a contact codenamed “Hammerhead” would meet them on Tatooine to inform them the location of the Ubiqtorate camp.

Drew arrives on Bespin via a transport and hides among the Ugnaught miners in their quarters. Cloud City is a floating urban paradise which doubles as a mining platform for tibanna gas, a raw material used by blasters.

The Ord Mantell team arrives to meet with Drew, but not before saving Cloud City from being discovered by the Imperial Mining Guild earlier. The trio introduced themselves as Mark Grog a jet-pack slinging bounty hunter, Steven Waverider a disaster prone outlaw, and Roland Ritcher an up-and-coming suave high stakes gambler.

The trio bring Drew to their ship, the Drunken Dewback, an ancient scout ship which they found buried deep beneath ice and snow some time ago.

Screen capture from Star Wars: The Empire Strikes Back (Lucasfilm, 1980)

They then cast off from Cloud City and set sail for Taboon.

Drew locks on to Wormie’s beacon signal. With a landing spot determined, the Drunken Dewback sets down in the middle of a three-kilometre long gorge known as Mageye’s Chasm. The four of them disembark and discover an abandoned camp-site. Among other things, they find a one-man tent, a broken glowrod, a broken heating unit, and an empty water container.

However Wormie was nowhere to be found.

Drew stands by in the Dewback‘s cockpit with her engines running in case the need arises for a quick escape.

The Mark, Steven and Roland proceed to search the surroundings on foot with their weapons ready.

The air is biting cold and their breaths condense visibly. Then, they hear a noise in the darkness and sneak over some frozen boulders. They see a massive pachydermoid Chevin, wearing a heavy grey cloak. He is unarmed as far as they could tell, and he was being herded by a group of Kajain’sa’Niktos. The lead Nikto tells his prisoner, “You should not have betrayed my master. He thinks you are working with his rival Jabba. If you have anything to say, Ephant Mon…?”

The one named Ephant Mon rumbles, “You Niktos go freeze your breathing tubes.”

“Jabba will never find your body.”

But before the Red Niktos can act, the rebels leap to the rescue with their blasters blazing. The Niktos, caught off guard, are easily defeated. After the rescue, Ephant thanks the team and they ask him if he knew anything about Wormie.

He replies that he knows nothing of a “Wormie” as he had been a prisoner for the last several days.

After they say their farewells, Ephant Mon leaves to go look for the Red Niktos’ vehicle while the rebels return to the Dewback.

The Cratertown rebels decide to fly to a nearby village, much to Drew’s protests. He wants to search the chasm some more for Wormie. The frozen settlement is located 20 kilometres south of their position. Mark, Steven and Roland want to look for a guide who can help them, so Drew relents.

The snow-logged settlement is for all intents and purposes a ghost town. They walk through the nearly deserted main street and head for a local dingy cantina. A barkeep insists on two things: one, that he knows not who or what a “Wormie” is. Secondly, the rebels must buy and taste his latest concoction, a beverage brewed from the intestines of a snow worm.

The Cratertown trio then change their minds and left. Soon, they head back to Mageye’s Chasm to look for their missing contact.

Their search on foot leads them to a grotto that emits smoke. They realise that it is not smoke but condensing steam instead. Led by Drew, they sneak carefully into the cave.

Within the cave is a crater of hot, bubbling spring water, which sends thick billows of water vapour into the air. Surrounding the crater are more Red Niktos led by a vicious-looking human who sport decorative scarring.

On the floor and bound by syntherope, a young brown-haired human lie on his side unmoving. He wears a cold weather jacket. Is this another rival for the Niktos to neutralise? Is the young man Wormie?

The four rebels again leap to the rescue. While the other Niktos turn to face their unexpected attackers, the lead Nikto yells to the scarred human, “Kill the young one, Taggor Bren.” The grotesque human draws his vibroblade to kill the young man with. Bren mutters, “It is unfortunate for me Ephant Mon got away. But it is more unfortunate for you to have stumbled onto our party, young one.”

The rebels manage to overcome the Red Niktos. Mark, recognising a fellow bounty hunter, lunges to and grapples with Bren while Drew frees the prisoner.

But before the others could help the grappling Mark, Bren lobs a grenade into the hot spring in the crater. The ensuing explosion does not harm anyone, but the resultant mist obscures everyone’s vision. It is through this thick mist that Taggor Bren makes his escape. 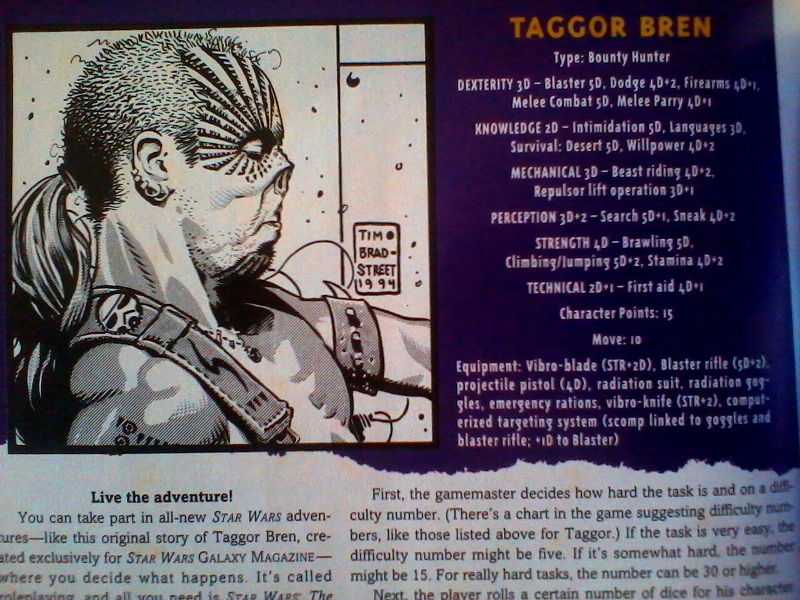 After securing the cave, the prisoner they free identifies himself as “Wormie”. The team of five rebels tries to attempts to track down Bren, but they fail.

So with time not on their side, they return to the Drunken Dewback and soon make the jump into hyperspace towards Tatooine.

To be continued in Part 2.