I figured it was time to return to the source from whence my interest of simulationist/narrativist tabletop games originated: Star Wars The Roleplaying Game once published by West End Games and run using the D6 system. It was the first RPG that I ran for Irfan once upon a time and we have never played it since. 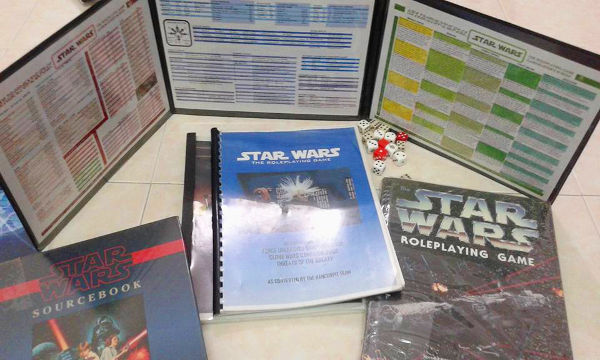 Irfan plays Jax Hunt, a young human bounty hunter who is on his way to get his House Benelex Bounty Hunters’ Guild membership card from an agent/broker in the Byblos system.

Jax wears a flak jacket body armour, a Relby-k23 on his hip and a modified helmet to protect his head. After some decades living alone and scrounging in the streets, bottom feeding, Jax had decided to pursue a career as a bounty hunter. Perhaps someday he would even be able to catch the outlaw who had murdered his family when he was a little boy. 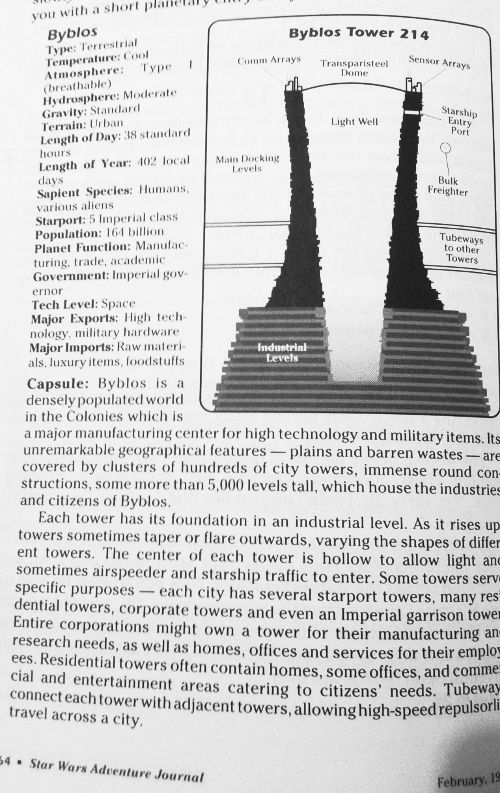 A Taylander shuttle landed in one of the many gigantic hangar bays, a dot on the side of the colossal city named Byblos Tower 214. Among the passengers disgorged into the space bustling with people and cargo was Jax Hunt.

He left the hangar bay area and tried asking the locals where he could find Mr. Abbit Mowba who runs the local Benelex Guild office located at an area named Blue-772, but he was not savvy enough with the streets of Byblos to do so. (Streetwise skill roll failure, 8 on a Difficulty Number of 15.) After travelling for some hours through the vast hallways of commercial marketplaces, narrow corridors of residential areas and the local travel tube network, he found himself alone in a dingy, badly-lit street which did not have an external window illuminating it. (Irfan rolled Streetwise one more time, but failed with a 11 on a 15.)

But on the far end of the street is a heavy blast door marked Blue-772. He scanned the empty streets and saw nothing but tightly-shut doors, overturned crates and puddles of liquid created by hidden leaky infrastructural pipes. The smell was almost unbearable. (Perception failure of 6 on a Difficulty Number of 9!)

He had another block to go before he reached the blast door when a voice called from down a dark alleyway. A grimy-looking Devaronian appeared from out of the shadows. He said, “Hey. Do you have some spare change?” There was a beat-up blaster pistol in the Devaronian’s hand.

“I think you do. You people never have any money on you, but when we look, we’ll find it.”

A door behind Jax on the other side of the street opened and a Gran bounced out. His blaster pistol was pointed at Jax’s back. Jax was outflanked. The Gran sneered, “We are going to eat well tonight. Search him!”

The Devaronian lowered his weapon and strode toward Jax, grubby hands going for his pockets. 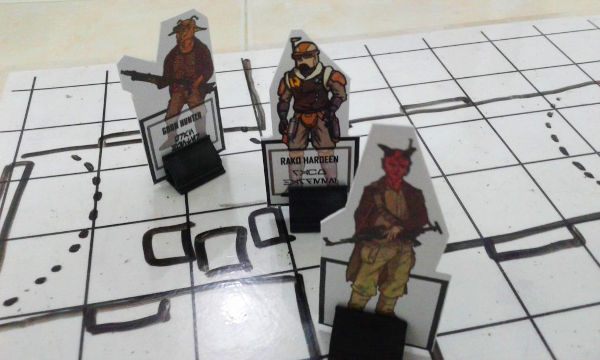 Those thugs’ blaster skill codes were only like 2D+1

Jax spun, drew his pistol and shot at the Gran. Taken by surprise, the Gran fell in a cloud of smoke and sparks. The Devaronian drew his blaster and fired. Jax twisted out of the thug’s way and brought the Relby-23k’s muzzle onto him and fired, but he slipped and started to tumble (thanks to a 1 on the Wild Die). But the bolt struck the thug’s side. He screamed in pain and began running back into the alley, shooting wildly as he fled.

Jax decided that going after the thug was a waste of time, holstered his blaster pistol and five minutes later has opened the blast door.

Blue-773 was a commercial sector of Tower 214. The space before him was five levels in height and perhaps four hundred metres in length. Behind him was the closing blast door and a series of gantries above that led to other blast doors which in turn led to other levels of the city. To his right, the entire five-level-tall wall was a transparisteel window which illuminated Blue-774 with a healthy dose of the afternoon sunlight. On his left is level after level of shops and a network of streets, stairs and escalators that allowed access to them. There were planters filled with flowering plants and bushes, ferns and some species of palm trees on every level.

Jax thought he could spot the Benelex office from a vantage point in the town square, but failed. (A Streetwise failure yet again, 9 on a 10 Difficulty.) A speeder bike almost mowed him down. (Dodge success, 16 on a 10.) He hopped out of the way flustered and found himself face-to-face with a Green Nikto who was selling fruits by the street.

The old Nikto rasped, “You look like you need help.”

“Yes,” Jax sighed. “I’m looking for the office of Mr. Abbit Mowba, the House Benelex agent here in Blue-772. Do you know where he is?”

“Ah yes,” the fruit-seller exclaimed. He pointed a scaly green hand to one of the shops and said, “House Benelex. Right by the little palm frond there. Their sign is worn out. You wouldn’t be able to spot it unless you’re really close.”

“Hey, you could use a meiloorun!” he held out a fruit in his hand. “Only five credits.”

“You’re good people, son.” Then he leaned to Jax and whispered, “Hey, I should warn you: I saw a big, angry-looking person with a heavy blaster pistol walk up to the Guild office and enter. He hasn’t come out yet. I’d thought you’d need to know.”

Jax sighed internally but smiled at the Nikto, “Thanks again.”

House Benelex – Watcha gonna do when they come for you?

Three flights of stairs later, Jax took a deep breath and knocked on the door beside the large tinted window with the worn out emblem of House Benelex on it.

After a long pause and another bout of door knocking, it slid open. Darkness hung within. A gruff four-armed Besalisk slid out of the darkness, his gun arm hovering close to the holster on his hip.

“I’m looking for Mr. Abbit Mowba? Are you him?”

Jax’s eyes were getting attuned to the low light within the office. There, within the shadows, was an old Aqualish wrigging, as if he was tied up.

The Besalisk saw the change in Jax’s eyes.

Like lightning, the Besalisk had his BlasTech DL-44 heavy blaster pistol in his hand. As the arm swept upward to Jax, Jax took the range opportunity to slap the blaster away… but he failed. (Brawl with a -1D penalty and failed roll of 6 on a Difficulty of 7.) The DL-44 went off, but inflicted a glancing hit onto Jax’s armour as he sidestepped. (Blaster roll of 11 on a 10, causing a Stun damage.) The burst of kinetic energy followed by a blooming cloud of sparks winded the bounty hunter. Meanwhile, the Besalisk retreated back into the Benelex office.

Jax shrugged off the hit and wondered what to do next. How was he to rescue Mowba if he was a hostage inside? If he rushed in he would be an easy target. He decided to drop and crawl quickly across the floor. Two blaster bolts flew over his head. One of the glowing red bolts of doom set a brown sofa on fire. And then Jax was safe behind the circular console table.

But what to do next, he was still pinned down and the Besalisk had the upper hand because his position was unknown and Jax had to offer his head as a target to see where the gunman was.

What else could he do to distract him?

He stretched out, grabbed the burning couch, quickly stood up and hurled the flaming home furnishing projectile weapon at where the blaster bolts were coming from.

The burning couch missed, (Thrown weapons skill with a -1D penalty, falied roll of 10 with a Difficulty of 17) but its impact churned up a miasma of smoke and sparks into the enclosed space of the office. Jax’s blaster was pointed at where the cloud of ashes began to dissipate. Then he saw the Besalisk holding the frightened Aqualish as a shield with his DL-44 pointed at his hostage’s head. 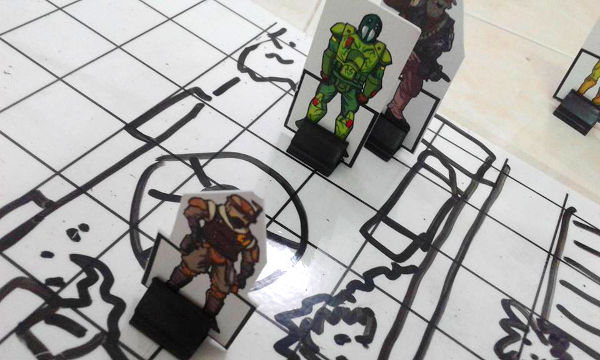 “You have ten seconds to leave or I will take Mowba’s head off his shoulders!” the Besalisk barked. His eyes showed that he meant it. (At this point Irfan said that all he could think of was the film Speed and ‘shoot the hostage’. But he decided on Trusting the Force instead.)

Another five seconds had passed when Jax felt inclined to calm his thoughts, allowing his instinct to flood through him. Suddenly, all his senses were clear and it felt like he had absolute control of the muscles in his body. It was an incredible sensation that relaxed him, and he yelled, “Mr. Mowba! Get down!” (…yelled Irfan in real life while sending a pair of dice flying across the room.)

He fired. The bolt struck home. The Besalisk was dead before he hit the soft carpeting on the floor. (He rolled a 30 altogther on a Difficulty of 15. But the Wild Die rolled a one, so 6 points were deducted, resulting in a roll of 24, which was still a success.)

“Are you alright, Mr. Mowba,” said Jax, putting away his blaster. The Aqualish nodded, rubbing his bruised sides and arms.

Soon, the emergency services and security forces had arrived. Flames were extinguished promptly. One corpse was taken away by paramedics. Mr. Mowba vouched for Zax when the security droids asked about him. And before he left togive a statement at the security station, Mr. Mowba tapped on his keyboard to access the House Benelex database. A card popped out of a slot.

It was his Benelex Guild membership ID with a full licence for bounty hunting authorised by the Imperial Office of Criminal Investigations.

Jax was now a legitimate bounty hunter. It was time to get to work. 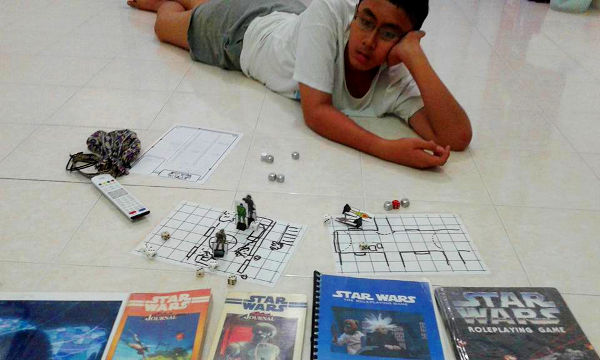 Wait, I thought this was a tabletop game