The Battle of Corulag

This Star Wars RPG game session (D6 system) was the first of two that I ran today using the same scenario I quickly devised yesterday for my English language classes. It was to see how different two different groups of students would play through the same adventure in the same day and if I could cope with both. The scenario was also written so the students would be able to discuss compare and contrast essays however because I started the class with an hour of presenting the conventional syllabus, we only had 45 minutes before time was up, thus we were unable to complete the scenario.

The session I ran earlier in the day can be found here. 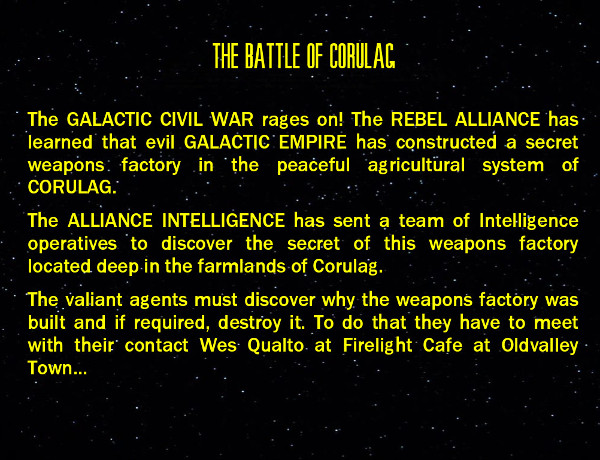 That’s an old valley which is also a town

The grey and blue YT-1300 light freighter Speed Hip slowly landed on the landing field at the southern outskirts of town of Oldvalley, a population hub in the agricultural fields of the planet Corulag. The Speed Hip‘s ramp descended and seven individuals were disgorged into the cool Oldvalley morning air.

Their orders were clear: make contact with their agent Wes Qualto at Firelight cafe in Oldvalley. Qualto would brief them on what he had learned about the secret Imperial weapons factory that was rumoured to have constructed in the area and if they were required to destroy it.

The former Imperial TIE fighter pilot Bob led the team into Oldvalley. Beside him was the armoured bounty hunter Fetty, who took her name from the notorious bounty hunter Boba Fett.

Bob: I was a pilot with a dark past and was now trying to make amends.

Jadoo took point in town, looking for a site that could be used as a temporary base. (Succeeding in a Streetwise roll,) Jadoo led the group to a small abandoned warehouse still connected to the power and data network grid. After an hour, they had converted it into a forward operating base. 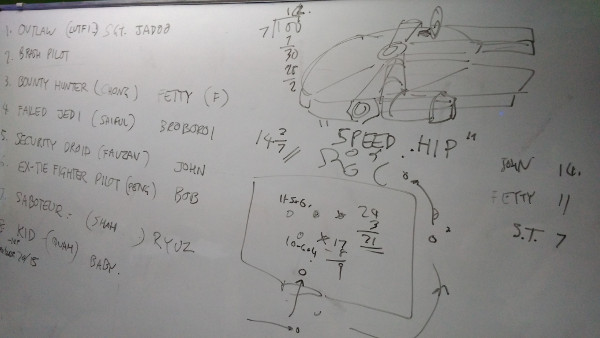 Whiteboard notes along with the cast of characters

Then the team headed out for Firelight Cafe.

The Firelight Cafe was located near the town square. There were many Imperial stormtroopers patrolling the streets of Oldvalley, and not many citizens were walking about in town. They staked out Firelight cafe for a while, then they sent Broboroi ahead as a scout.

Broboroi, who once studied to be a Jedi and now a fugitive from Imperial Inquisitors, was a Force sensitive. There were two stormtroopers standing guard at the Firelight entrance. He ignored them and walked in front of the cafe’s facade. He concentrated, let the Force flow through him and the Force told him things he needed to know:

He sensed that there were four military-type individuals in the cafe (stormtroopers, presumably) who were surrounding an individual, one very distressed male human. He returned to where the team was waiting and gave them the information they need.

Then, they formulated a plan. 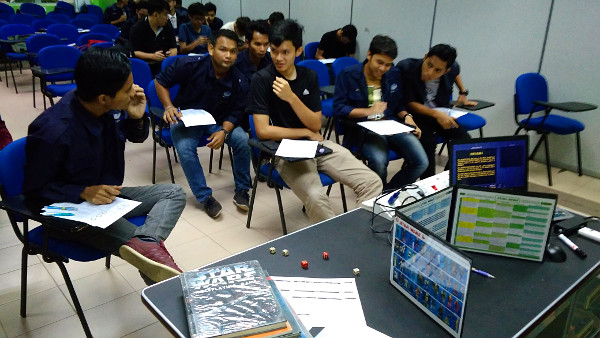 Well, Baby formulated the first part of the plan. The 8-year-old boy skipped innocently ahead towards Firelight. Before the stormtroopers guarding the door in front realised it, Baby grabbed one of troopers’ E-11 blaster rifle and ran around the corner. The troopers chased after him, yelling, “Stop!”

The entrance to Firelight unguarded, the team rushed in.

Meanwhile, Baby dove into and hid in a huge pile of garbage in the alleyway behind the cafe. The two stormtroopers (failing their Search roll against Baby’s Hide roll) were unable to spot the little boy. The soldiers moved on to the next alleyway looking for their quarry.

In the cafe, Fetty – ever the violent bounty hunter – without any warning fired at the four troopers within. (Bonus +1D to Blaster skill because the troopers were caught flat-footed, -3D because firing at four in a single round. There were only two successes out of four.) Two of the Imperials fell, one with a glowing hole in his chest and the other with a smouldering stump for a neck. The other two turned to fire on her. 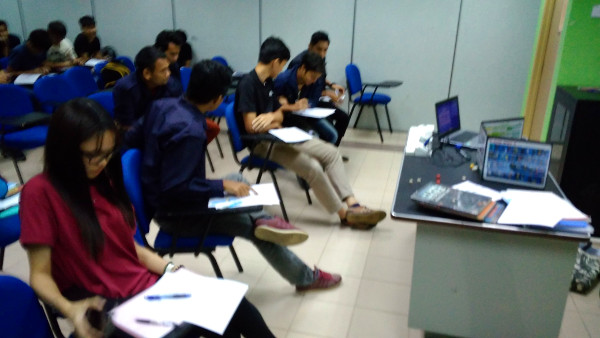 Again with the GM screen

However, Jadoo and Broboroi swept in through the door and attacked. (Having the initiative in the new combat round) Jadoo dropped on stormtrooper and Broboroi stabbed the other through the chest with his the glowing green energy blade of his lightsabre.

The man who was previously cornered by the stormtroopers put his hands up and said, “Please don’t kill me.”

It was Baby who greeted the man properly and said, “We’re not here to kill you. We’re here to meet you and find out about this secret weapons factory here.”

The man was relieved. “You’re from the Rebellion? I’m Wes Qualto. Come with me quickly.”

Before the local security agents and Imperial troops arrived, Qualto had led the team to an adjoining street where his Cryospac-90 “Boghopper” speeder was parked.

Baby told Qualto, “We have a secure base in an abandoned warehouse in town. I suggest we head there.”

Qualto got into the pilot’s seat with Baby beside him. The other six rebel operatives got into the back of the speeder. It was an uncomfortably tight fit. Qualto drove out into the main street through the commercial district leaving the Firelight cafe – now swarming with security forces – far behind. 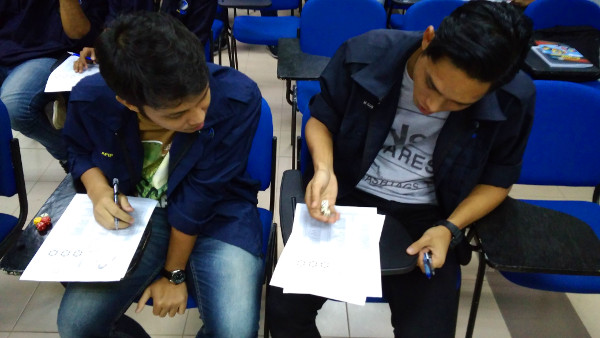 Baby asked, “What do you know about this factory?”

Qualto replied, “The factory appears to be a covert operations by the Empire. It’s not on record. Whatever they’re making there, it’s not for public eyes.”

Qualto made a face. “Yes, but there is a problem. The factory is built under an agricultural complex. If we destroy it, we will kill over a thousand civilians. The rebellion cannot afford this to happen.”

In the back, the saboteur Ryuz made an unhappy noise because this would not be a simple job.

Suddenly their Cryospac-90 braked without warning. The rebels in the back grunted uncomfortably. They looked ahead in the street. There were a pair of Imperial scout walkers before them. The two-legged walkers’ twin laser cannons mounted at their chins were pointed at them.

“Rebels!” a voice boomed from one of the walkers’ external speakers. “Exit your vehicle with your hands in the air right now or we will open fire.”

What would they do next?