03 Rescue in the Rainforest

Last time on Doom Agents, four operatives sent to investigate the Eternitech factory deep in the South American rainforest located by the Amazon river had been captured by Eternitech’s security forces led by Hideo Eguchi.

After an enemy flashbang grenade did its job in the store room where they were laying an ambush, the four agents found themselves each tied to a chair in the Eternitech factory floor, specifically on a conveyor belt that would lead to a shredding machine. 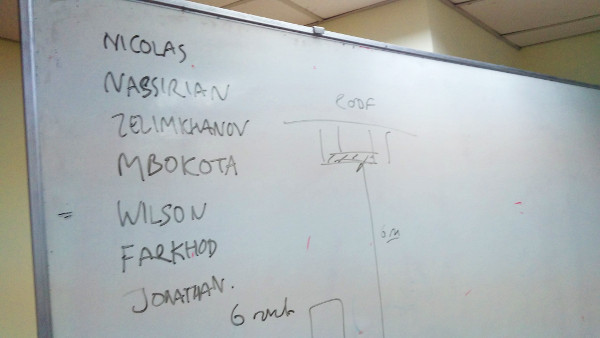 The cast of characters welcome you to this mission

I Want To Break Free

“You think you can stop us from launching our plant?” Eguchi said, slightly gloating over the captives. “We know you are not from the UNEP. If you won’t tell us where you’re from, then you’re useless to me.” Then the Security Director of Eternitech pulled a lever and machines came to life. The conveyor belt began to move. So did the various robot arms and waldos. And so did the spinning set of shredding gears at the end of the conveyor belt! Eguchi smiled then exited through a door out of the factory floor.

Nassirian, Zelimkhanov, Mbokota and Nicolas struggled the best they could but they were unable to get free. If they could not free themselves then they would die. Their weapons and gear had been confiscated. They were about to surrender to their fates when Nassirian looked up and saw three figures dressed in black creeping along on a catwalk 7 meters above the floor. Nassirian gestured for the team.

The newcomers comprised of their teammates, Agents Jonathan, Wilson and Okhunjonov. The four were elated, but tried not to show their glee too early.

After quickly setting it up, Wilson’s tactical training allowed him to slide down his 10-meter rope onto the floor. Wilson hit the ground running, his pistol trained at the door. The others descended swiftly. As Jonathon looked for a way to stop the machines, Dr. Okhunjonov leapt onto the conveyor belt. She picked out a surgical blade from her medical pack and cut the captive agents’ cable ties that were holding their hands and feet to their chairs. 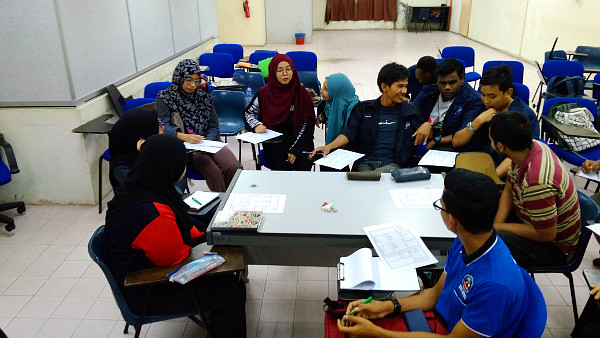 Once freed, the seven agents began planning their retreat. But the door opened and two guards walked through the door. Luckily they dove into hiding successfully behind large crates and stationary machines.

When the guards noticed that the prisoners were missing, the agents ambushed them. Mbokota shot and dropped one guard with Okhunjonov’s weapon. Wilson pounced out of hiding and stabbed the second guard who was only injured. He twisted away and hit the alarm. A second thrust of the knife dropped the guard in a pool of his own blood, but it was too late.

Okhunjonov wanted to take the guards’ uniform but there would not be enough time before the doors opened. Nassirian locked the doors and ordered everyone up the rope to the catwalk above. The door started banging loudly. When the second-to-last climber Wilson was pulling himself up the rope, the doors exploded inside. The last climber was Nicolas. Wilson had turned and aimed his M4 rifle at the guards, felling two of them.

A surviving guard shot and hit Nicolas before he was halfway up the rope. He fell and was incapacitated. 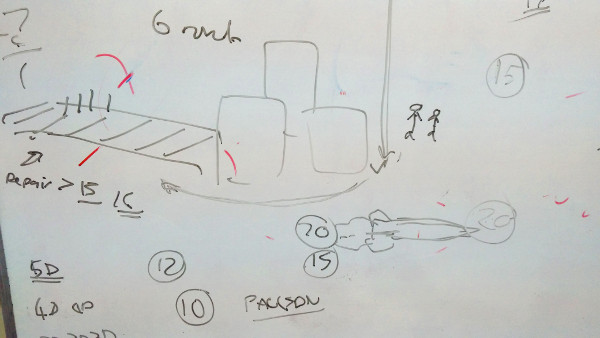 The conveyor belt, the machines, the rope, et al.

Jonathon lobbed a grenade that took out the remaining two guards while Wilson slid down the rope. They could not leave a friend behind in battle. With the unconscious Nicolas over his shoulders, Wilson climbed the rope while the others pulled on it, making him ascend faster.

The Night Comes Down

Soon, they had swiftly climbed out of a window at the top of the building onto the factory’s roof. It was spacious and flat. The sun had set over the dark green mass of the vast rainforest that waited before them. There were some orange and pink painted in the skies to the west.

On the south-western corner of the roof were three camouflaged parachutes that Okhunjonov, Wilson and Jonathon had used to HALO drop onto the Eternitech factory.

Okhunjonov tried using her satellite phone but she could not get a connection. (A successful Technology roll revealed that there was a signal jammer nearby.)

Okhunjonov used her medical pack to fix as much injury to Nicolas as she could. After 2 minutes, she had removed the bullet from his upper left arm and stapled the open wound. With a cocktail of drugs pumped into him, the French hacker woke up with a gasp, alive but sore. Thankfully nothing was broken although he might be suffering from a slight concussion.

Zelimkhanov and Nassirian looked over the east side of the factory and discovered that they were right above the Amazon river. The river was wide and dark. A hundred or so metres to the north along the river was a small pier with a speedboat tied to it. The boat was big enough take them all.

But time was running out. 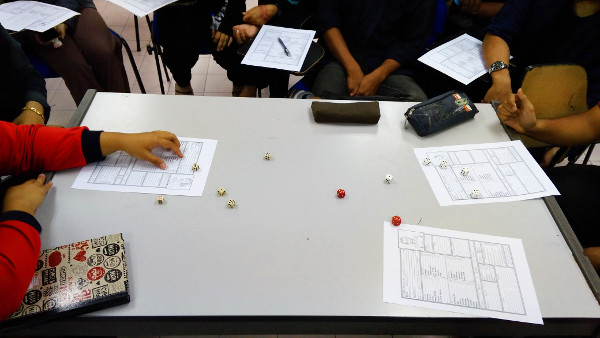 Roll with the changes

Twenty seconds later, the three parachutes were prepped for use. Okhunjonov leapt off the roof with Nassirian holding on to her. The chutes deployed and Okhunjonov aimed for the speedboat.

Next, Mbokota jumped with Adrien secured to the parachute harness. The four of them landed on the pier safely (Successful Pilot Aircraft rolls) but it was Zelimkhanov and Wilson who landed right in the driver’s seat thanks to the Chechen wheel artist’s excellent skills. Immediately, she had the engines running.

Jonathon jumped into the Amazon, splashing loudly. The boat roared off to pick up their solo wayward compatriot as shouting began above them. “There they are! Shoot!”

Zelimkhanov opened up the throttle after Jonathon was pulled aboard.

Bullets landed close to where Nassirian was standing at the boat’s stern, but none struck her (because the guards’ Shooting roll was not able to reach 20 on a moving target in the dark at that range). 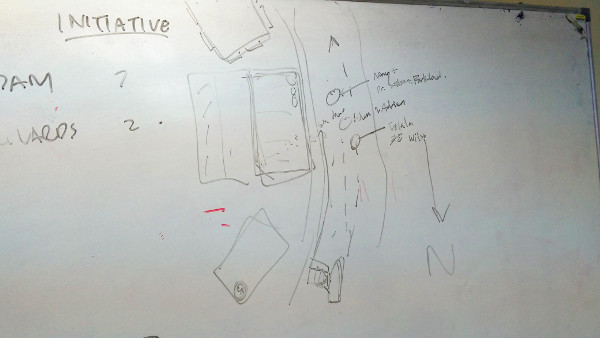 The speedboat zoomed off into the darkness, riding the choppy waves of the vast Amazon river.

There was a flash from the Eternitech compound and something flew leaving a trail of smoke. It was a rocket. Nassirian shouted to Zelimkhanov, warning her. Zelimkhanov tried to evade the incoming projectile.

But she failed (thanks to a lousy Drive Vehicle roll, with a darkness penalty).

The rocket hit the boat and exploded.

(Thanks to multiple successful Athletics rolls,) Nassirian’s alert gave the rest of the team enough warning for them to see that they could not avoid the rocket. They jumped into the river less than a hundred metres from the other side of the river as the boat tore itself apart in a fireball.

Ten minutes later, all seven agents hauled themselves onto the river bank. They were all soaking wet, sore all over their body and they were in near darkness.

They headed inland about fifty metres before holing up. Wilson started a fire.

Doctor Okhunjonov tried her satellite phone again. Signal was available much to her relief. But before she could dial out, the phone rang. She heard, “Where are you, daughter? I’ve been trying to call you for the last two days and could not get through. I thought it’d be great if we went out for a nice dinner tonight. Can you pick me up at 9?”

Okhunjonov replied, “Mother! I’m sorry I have to work late and I can’t really meet you tonight. Hopefully tomorrow. I can’t talk right now. I’m in a meeting!”

And the Uzbek doctor hung up the phone.

Everyone was looking at her with amusement.

She smiled back and was about to call Command when Nassirian (the only one to succeed a subtle Perception roll) cried out, “We have company!”

They all scrambled up into battle ready position back-to-back peering into the dark jungle that enclosed them on all sides.

Glints of metal appeared not half a metre from their eyes. The metal were arrowheads. Arrows were pointed at their heads. They were nocked and pulled in their respective bows. There were people holding the bows. They were camouflaged against the Amazon night.

More than a dozen Amazonian tribesmen surrounded them. One wrong move and an arrow would be buried in an eye.

One tribesman stepped forward. He wore clothes made from natural materials of the jungle and wielded a spear. He said to the agents, “Come with me if you want to live.”