The Nerve of These Imperials

The Dawn of the Rangers

Previously on Dawn of the Rangers…

A long time ago in a galaxy far, far away…

The crew of the Rough Profits embarks on a mission to retrieve the Tiss’Shar Dr. VER-THO-REE from the clutches of the evil GALACTIC EMPIRE, on Elshandruu Pica. The doctor would be able to formulate a reagent that would neutralise the nerve agent bombs on the planet VANDOR. Over the ocean, GEV, GODDARD, ORDAN and ZOR face off with Imperial stormtroopers in the luxury car of a Unirail guarding the good doctor. As the droid K3LP flies the ship, pacing the train, ORDAN feels a strong call in his mind… 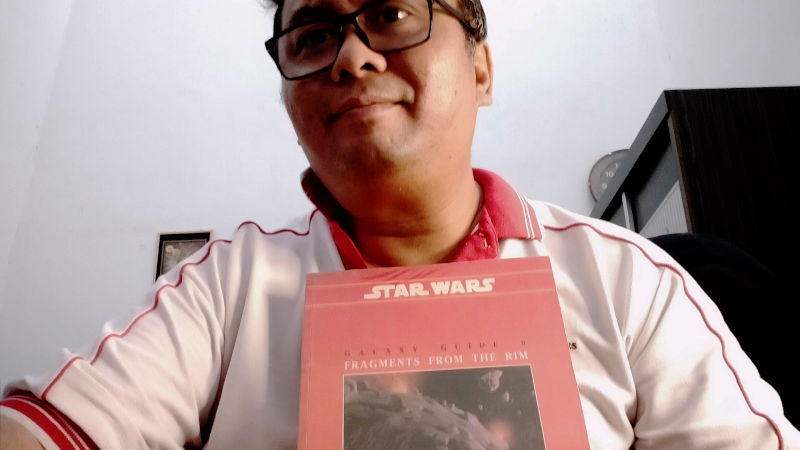 GM with Fragments From The RIM

They had ten minutes before the unirail reaches Ollitavalam Island, the Imperials’ destination.

“Doctor, drop to the floor,” said Zor Draco to Dr. Ver-Tho-Ree, who was flanked by six Imperial stormtroopers in the luxury coach. Beside him on the open rear landing of the coach, Kin Asa Goddard drew his blaster. The KX security droid K3LP and the astromech droid R4-3T were piloting the Rough Profits two hundred metres above and behind the speeding unirail., above the oceans of Elshandruu Pica.

Meanwhile, as Gev Dyson ran forward towards Zor and Goddard, Ordan Vallas halted. The call in his mind was too strong. The former Jedi Padawan felt compelled to double back aft, and headed for the cargo coach.

In the closed luxury coach, the troopers split into two groups of three. The first group surrounded Dr. Ver-Tho-Ree. The second fired at Goddard, who yelled, “Bring it!” In the subsequent exchange of blaster fire, Goddard and Zor took down one trooper and wounded two. A single red bolt struck Goddard’s shoulder pad which blossomed in a shower of sparks, but did not injure him. Zor thought it was great he was wearing a sort cape so he could look fabulous while blasting at bad guys.

Meanwhile, Ordan had returned to the cargo coach and felt the pull of the Force here. He dug into the luggage and found the source of the Force: a dark grey crate with an Imperial insignia on it. It was locked. He looked for something with which to break the lock. He looked around and found a heavy cast iron camshaft. One strike and the lock broke. In the crate, Ordan beheld a blue crystal suspended in a repulsor field. It called out to him, strongly, as if it knew Ordan. He took it, then headed back towards his comrades. 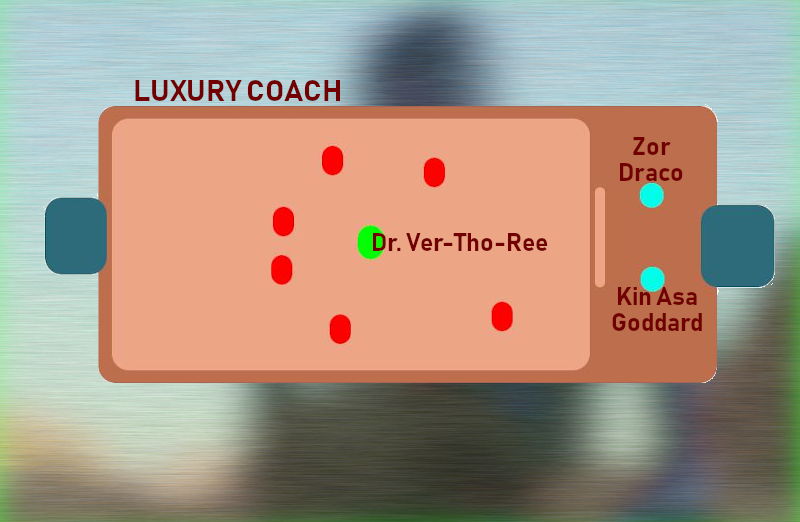 Where people are on the train

Troopers, those still standing, in the luxury coach fired at Zor who lunged out of the blaster bolts’ path. From the cover of the door frame, Goddard’s shot brought down one of the three that surrounded the doctor.

Suddenly the door on the passenger coach slid open and a grinning Gev rushed out, leaving a wake of commotion behind him. A voice could be heard yelling, “Running? With a blaster? In a train?” Gev’s grin ceased when he caught sight of two injured stormtroopers taking aim at him. Gev’s double snapshot of yellow bolts, respectively, blew the head off one and burns a hole through the other’s midsection. The bounty hunter twirled his blasters.

Adjacent to them, the reptilian doctor leapt onto one of his escorts and slammed him to the floor. The lone standing stormtrooper was about to shoot him, but Zor swung into action. He fired twice. Although the trooper was hit, he was not incapacitated. Dr. Ver-Tho-Ree was able to rush out to join the rescue team. Gev greeted him, “Good day doctor. We heard you needed a lift?”

Alone in the luxury coach, the trooper barked, “Intruder alert. Activate Security Omega!” At that point, Ordan burst through the passenger coach door. He panted, “Don’t tell me I missed all the fun!” A complaining voice among the panicking passengers wafted from the coach, “More running? What is this? Primary school?”

“Security Omega?” said Zor. Although he was a former Imperial, Zor did not know what the term was (Bureaucracy roll failure of 11 on a difficulty of 15).  “I have a bad feeling about this.”

Gev agreed, “Uh, I don’t like the idea of a Security Omega.”

The comlink buzzed. It was K3LP. “What’s the status?” Gev and Goddard respectively yelled together, “We need an extraction, ASAP!” and “We have the package! Need pickup!”

Goddard had been studying the unirail itself (a successful Technology roll of 13 with a Difficulty of 12) and learnt which cable at the sides and bottom of the train was the emergency brakes.  He aimed and yelled, “Hold on to something!”. At the same time, the far wall within the luxury coach swung open and then six DT sentry droids with forearm blasters entered the fray. Zor cursed, “By the Emperor’s black bones!” Gev settled on the shorter, “Sithspit!”

Ordan swiftly fixed the blue crystal – a kyber crystal – into his empty lightsaber. He snapped the cover shut and whispered, “They’re gonna need this.”

That was when Goddard fired.

The entire length of the Unirail coaches braked. Everyone had braced themselves except for Ordan who was posing dramatically with his lightsaber. However, with the will of the Force, he was able to stand his ground during the sudden deceleration. Additionally, the DT droids were thrown backwards into their previously hidden compartment in the coach.

The unirail came to a dead stop as a YT-2000 roared overhead. Zor said, “Everyone take cover until our ride gets here.” 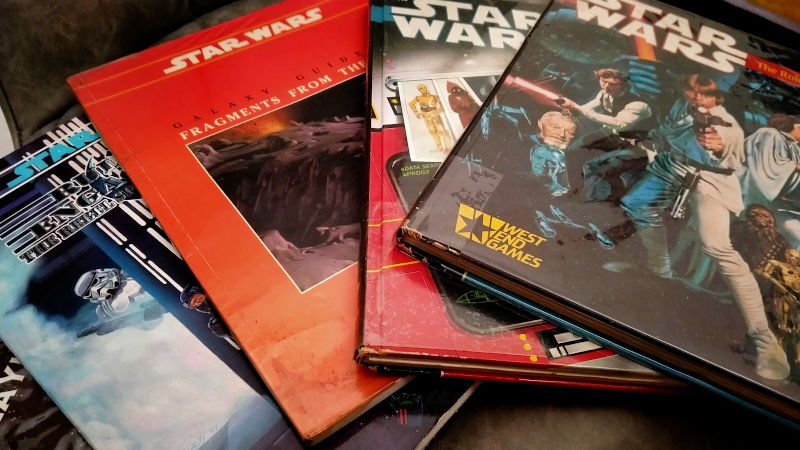 The lead DT droid had recovered and was already aiming its forearm blaster. Ordan slipped between the doctor and the security droids and ignited his lightsaber. He muttered, “I’m out of practice!”

Gev stood his ground and brandished his blasters. Both blaster bolts hit the droid’s armoured midsection and it exploded with a shower of sparks. Gev smiled, “I’m not out of practice.”

Then the sparks and smoke cleared up and revealed that the droid was still standing and operational. Gev cursed, “Emperor’s black bones! That normally works.”

The droid fired. Ordan – suddenly awash with tremendous calmness – swung up his energy blade and deflected the bolt back at its chest. Though it was still standing it needed some time to reacquire its target. Also, it was blocking the other DT droids that had recovered from their fall. Gev yelled, “That’s so wizard!”

The Profits roared down beside them in mid-air, her entry ramp open. The open sea was a hundred metres below them. Gev pointed at the entry ramp and screamed, “Run!”

Goddard pulled the Tiss’shar doctor and leapt across the open space onto the ramp. Then Zor jumped, followed by Gev who moved like a scalded loth-cat. 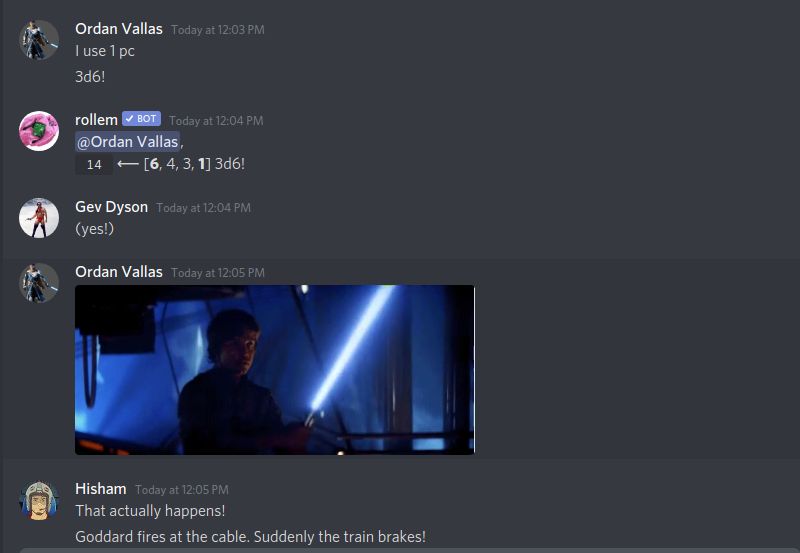 A lightsaber is ignited on Discord

But before Ordan was able to jump, the passenger coach door slid open and a clamouring crowd of rage-fueled  humans, a Snivvian and a Quarren rushed out, angry that their public transport had stopped in the middle of nowhere. “What is the meaning of this?” They grabbed at Ordan’s robes, restraining him. Ordan tried to jump, but was unable to because of the crowd.

The lead DT droid regained its senses and stomped out of the luxury coach onto the landing. Surprised, the crowd let Ordan go. Ordan kicked at the man holding him and somersaulted with amazing skill into the air. The droid fired, but the red bolt struck the Rough Profits‘ underbelly instead. Ordan landed gracefully on the ramp. He sighed, “That was close!”

Goddard hit a button and the ramp closed. Piloted by K3LP, the YT-2000 freighter rose quickly into the sky and disappeared into the clouds.

There was an Imperial Star Destroyer in orbit. Two flights of four TIE fighters flew in an intercept course towards the Profits but Goddard, back in the pilot’s seat and with R4’s aid, made the jump to lightspeed.

“Well, the best battle is the one we don’t have to fight,” said Zor. “Good job, squad.” 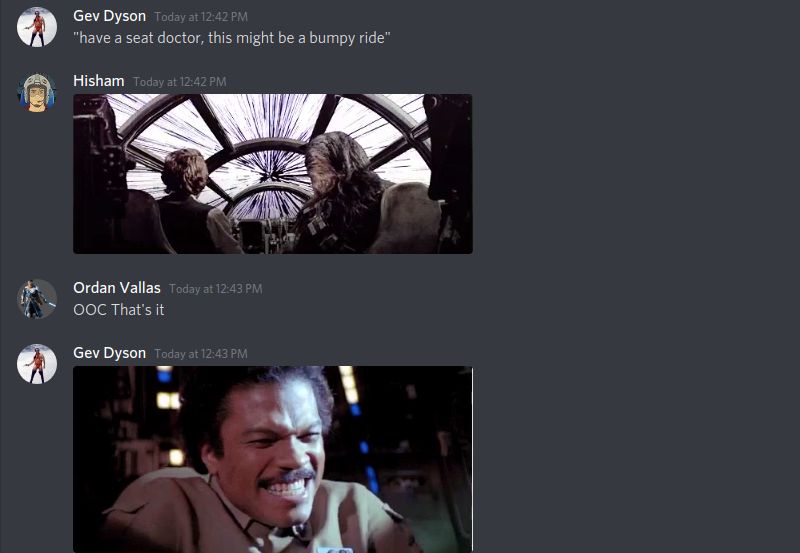 Jumping to hyperspace on Discord

Back at Vandor, Dr. Ver-Tho-Ree had plenty of time to synthesise the neutralising reagent and help Tailgunner‘s people to look for and defuse the nerve agent bombs. After, he told the team, “Thank you. I will never be able to repay you for saving my life and those on Vandor.” However they wondered what a Star Destroyer was doing at Elshandruu Pica, almost five years after the fall of the Empire. And what was an Imperial Security Bureau research facility doing on Ollitavalam Island?

Tailgunned said to them, “Listen. We need eyes out here in the Outer Rim. I know you are freelancers, but if you would accept a permanent position with the Republic as a roving team of peacekeepers, I would be very grateful.”

Zor said, “I’m already a New Republic officer, though my talents lie more in a fighter’s cockpit. But I go where needed.”

“Your skills will surely be needed here,” she said.