After their previous adventure to the “illusory” planet of Zarligrenor, the strikeforce decided to take a week off at the Ginuvar system located also in the Enteague Sector.

Ginuvar was a patchwork of territories belonging to galactic and local corporations such as Industrial Automaton, SoroSuub, BlasTech, Neurosaav and Koensayr. Ginuvar’s seas were a broth of toxic compounds and most of her land were a plethora of factory complexes, power generation stations, arcologies and atmosphere scrubbers.

The Nexus Point however landed in the planetary capital of Porzohal, a city built in the Green Zone, the only territory on Ginuvar still with a green and natural ecosystem, jungles and grasslands and all in the planet’s equatorial zone. 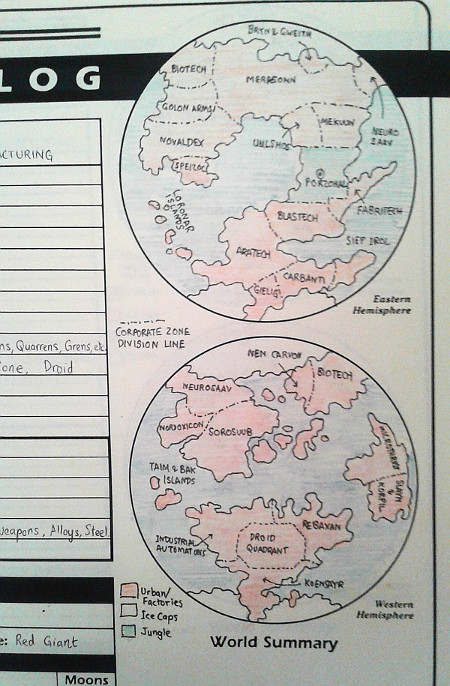 Phoenix Avalon and Jon Dean thought that they should let their bounty hunting team-mates Shanna Toarinar and Ace Browning Crossfire take the lead and get them some credits hunting for bounty. They headed to a local security centre and discovered that Enteague’s Imperial Governor Jannor had placed a bounty of 3,000 credits on Imperial Army officer Lieutenant Shade Anghor, dead or alive, for murder, desertion and the theft of thirty million credits.

Some seedy characters on the street sent them instead to a closed cantina named “Jaillor’s Place” if they were interested in the bounty.

They were met there by the most powerful person on Ginuvar, the crime lord Harv Ironfist. Every corporation on the planet paid his organisation for the permission to set up their territories on the planet while Ironfist ensured the trains ran on time and planetary security protected their business enterprises.

Knowing Shanna and Ace to be bounty hunters, he offered them double the Imperial bounty if Lieutenant Anghor was delivered to him strictly alive. Ironfist informed them that Anghor is hiding in his secret manor on Tark’s Plains at the neighbouring Kreane system.

The team agree to the job and return to the Nexus Point.

The Point set down in a clearing among the sagebrushes of Portgont Forest. Kreane was an arid world, full of deserts, rocky plains and tall dry cold mesas. Some regions were inhospitable to Human life. Although the town of Flogrosh was nearby, they followed Ironfist’s directions and began hiking north toward Tark’s Plains.

They soon arrived at a ring of mountains surrounding a small freshwater lake. On the island upon the lake was Anghor’s manor.

They observed five visible Imperial troops guarding the manor, allied with Anghor no doubt. They sneaked towards the only bridge to the island and disposed of the lone scout trooper guarding it.

They discovered an underground hideout in the dusty yard across the way from the T-47 airspeeders parked beside the manor. They descended into the tunnels and made short work of a pair of stormtroopers waiting for them at the doors to Anghor’s subterranean operations room.

They rushed into the room. Anghor defended himself with his SoroSuub Q2 holdout blaster. His determination to be protective of his three-million-credit stash was cut short by a blue stun bolt from Shanna’s blaster rifle.

The commandeered the T-47s to return to the Nexus Point with the unconscious Anghor secured.

But the two surviving scout troopers – who had been within the manor – discovered that their boss had been apprehended and hopped into the remaining T-47s to pursue the team. Upon being beset by cannon fire, Ace did a 180 degrees turn and succeeded in taking the airspeeders out of the Kreane skies himself. Then he flew back towards the manor, cracked open his canopy and demolished the building with a well-placed thermal detonator.

The team noticed that there were armed men waiting for them at the Nexus Point as they landed their airspeeders.

Shanna drew her blaster to protect her bounty, but the crowd parted to reveal the authoritative figure of Harv Ironfist in their midst. He revealed to them that Shade Anghor used to be Shade Ironfist, their marauding younger brother who had left their family business and had joined the Empire, and he went rogue there as well.

Anghor’s officers gave Shanna their 6,000-credit reward in hard cash. The last thing they heard before Ironfist’s group left was that “it was time for Shade to be punished by mama.”

With that, the team returned to Enteague Minor.