Episode 04B The Test of Truth Part 2

On their transport mission, the Nexus Point has crashed on an uncharted planet! Passenger Trace Traverse has disappeared! Their weapons are disabled! Unknown forces are closing in on the party! 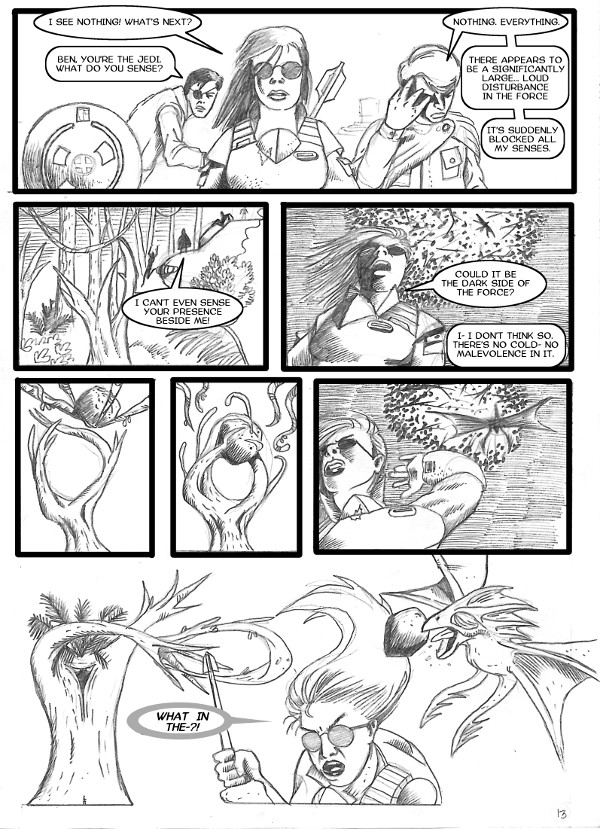 Page 13: I could have done a better job showing the party exiting the ship from the Nexus Point‘s top hatch and then jumping onto the ground. 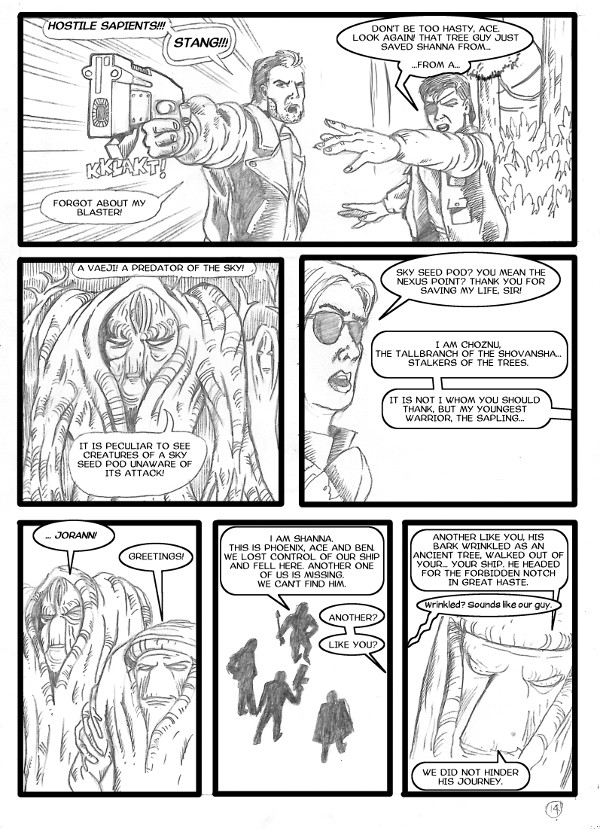 Page 13: All the fancy schmancy alien names here are made up years later, except for the name “Jorann”. 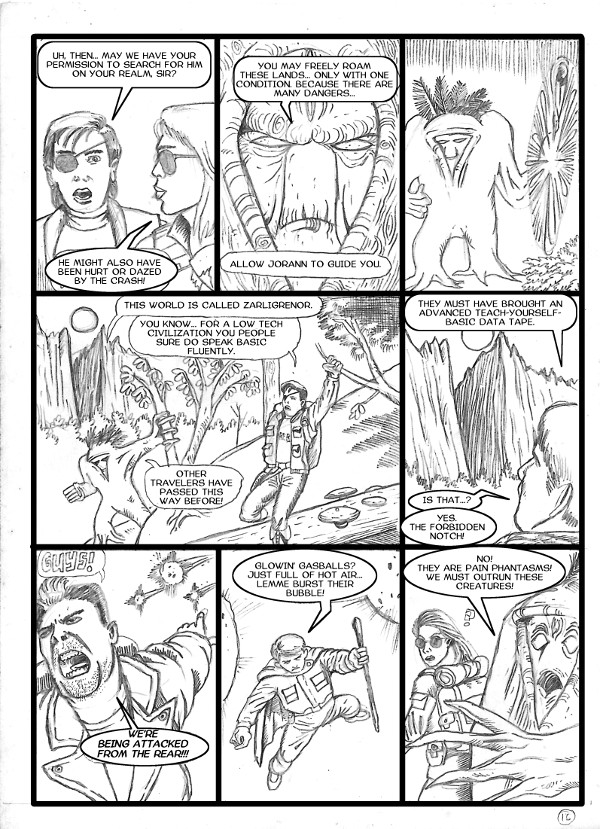 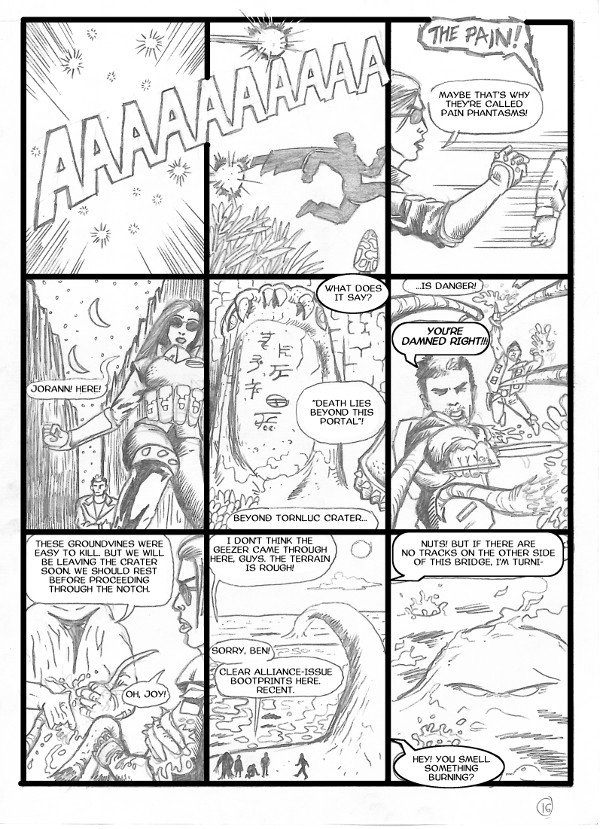 Page 16: I clearly remember the first three panels (and the preceding two panels in the previous page) happening during the game. 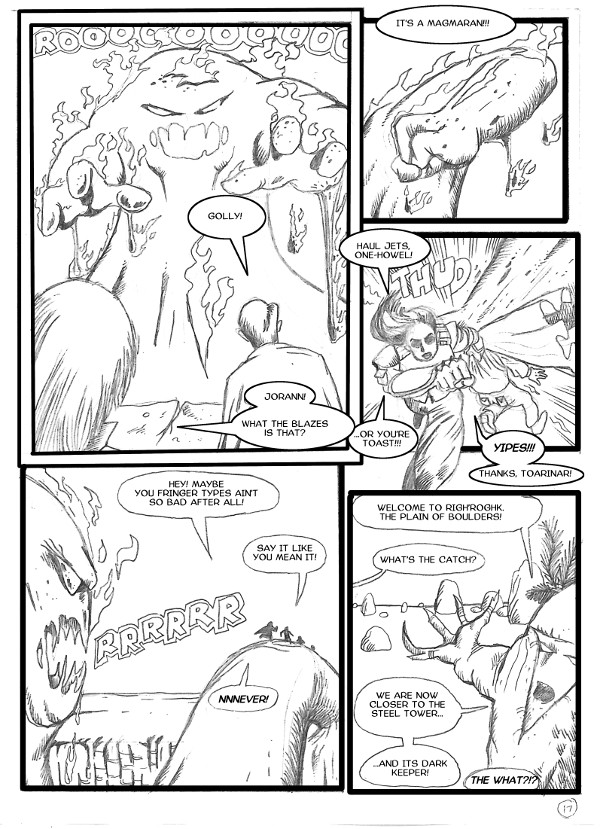 Page 17: Grief! This is right out of something akin to the Ewoks cartoon show rather than Star Wars Legends as it developed to be. 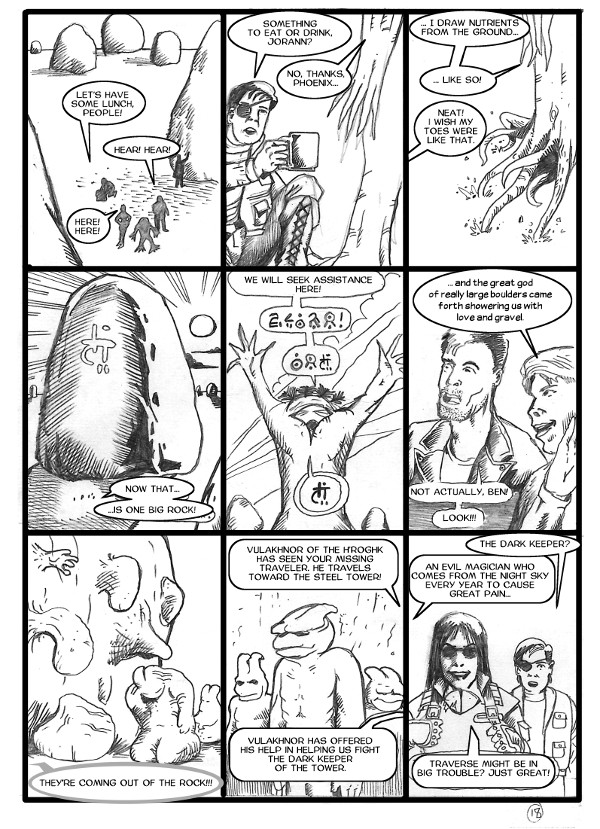 Page 18: Many hours of travel had passed between panels three (lunch time) and four (near sundown). I suppose more orange and yellow colours in the latter panel would make that fact clearer. Not that I would have time to colour any of these. 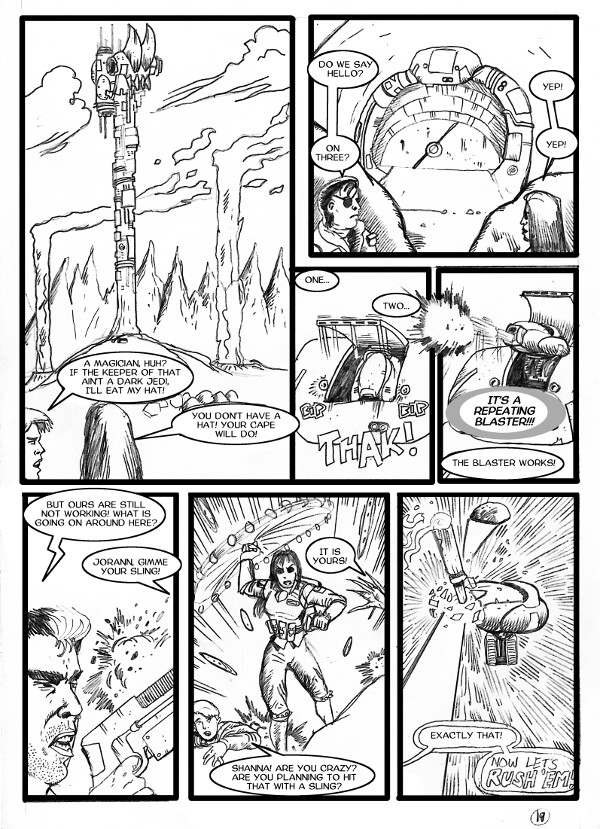 Page 19: Shanna got a “Treesling” in her DEX skills from here on. 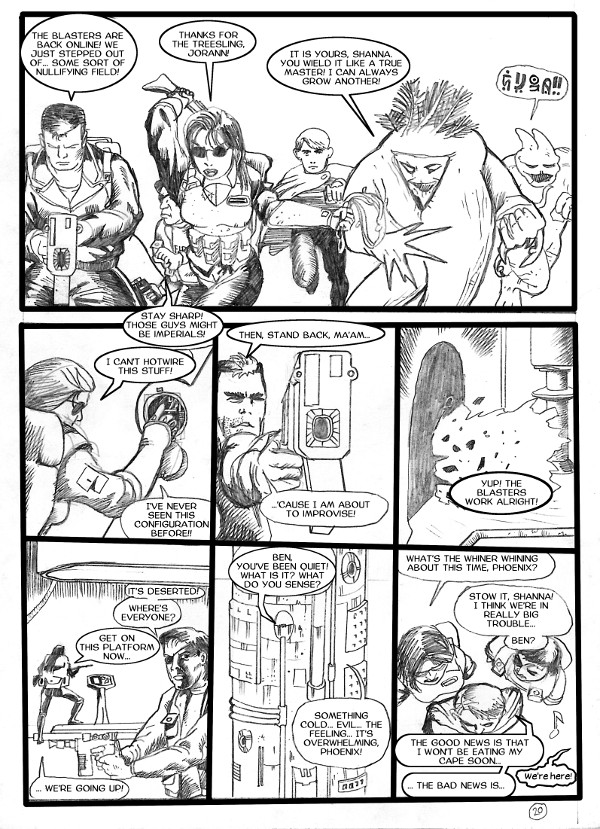 Page 20: So much information packed in these panels. Lots of telling and not showing. Except for the “Yup! The blasters work alright!” bit. 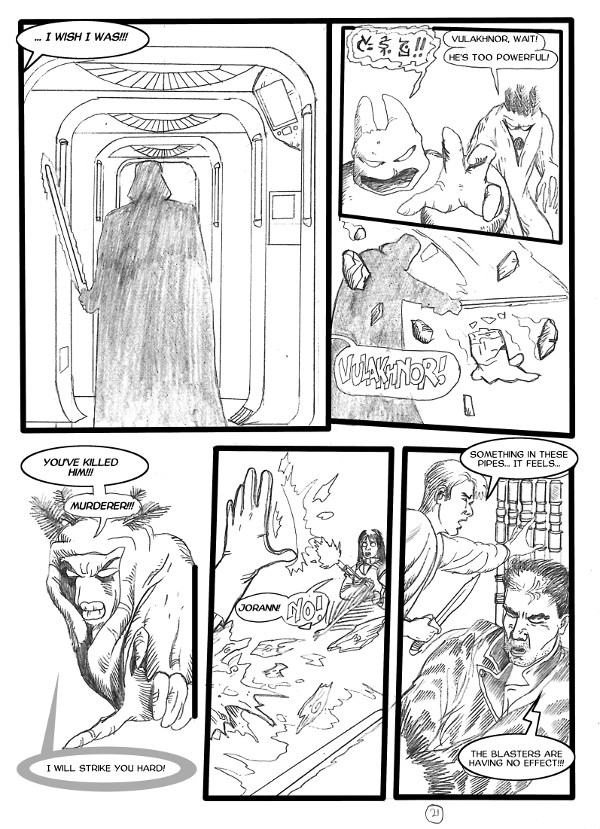 Page 21: This page I believe is laid out the worst of the bunch. That penultimate panel makes no sense. 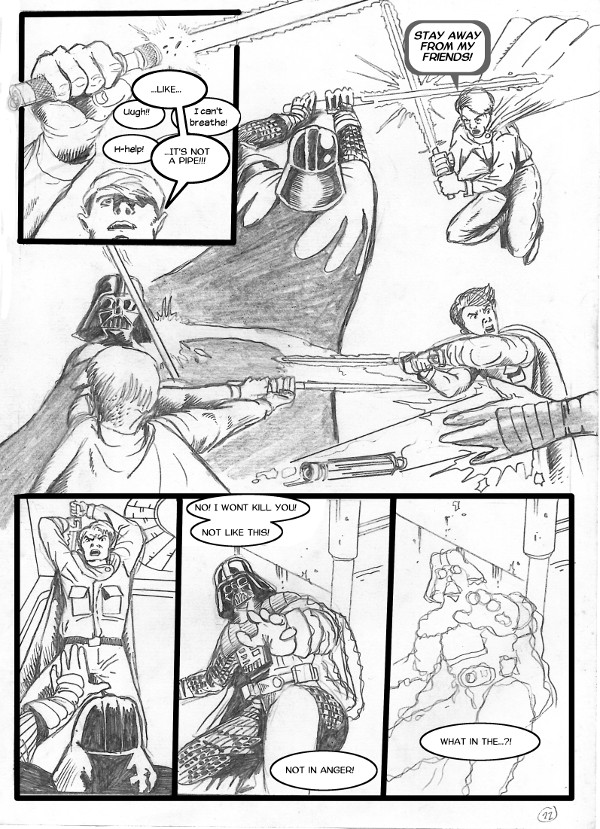 Page 22: That hand at the top of the page looks bad. Also, I have yet to learn about using thicker outlines to emphasise relative distance from reader. 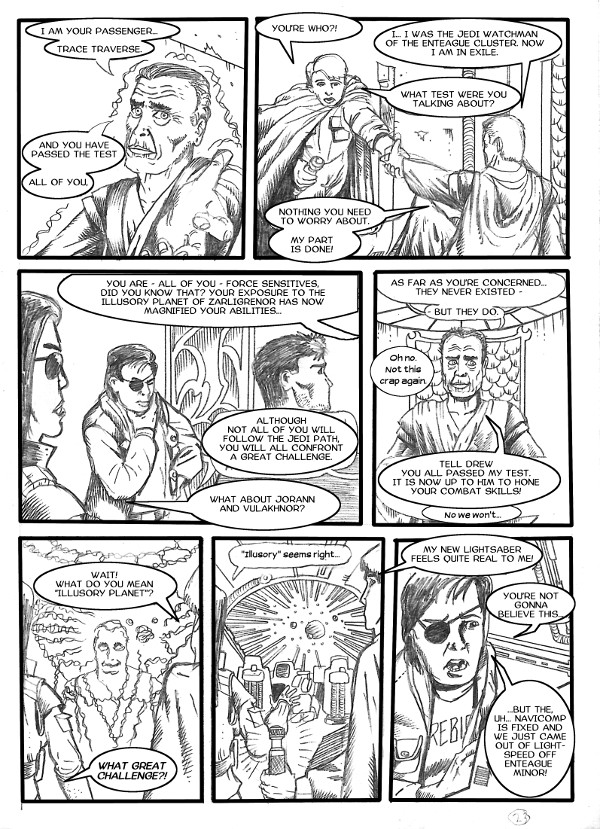 Page 23: This is where the game session really ended, with another mystery to be solved. This would be finally followed up and explained in a game just before I drew this comic. “Jedi Watchman” is a nod to Dark Horse Comics’ Tales of the Jedi series. 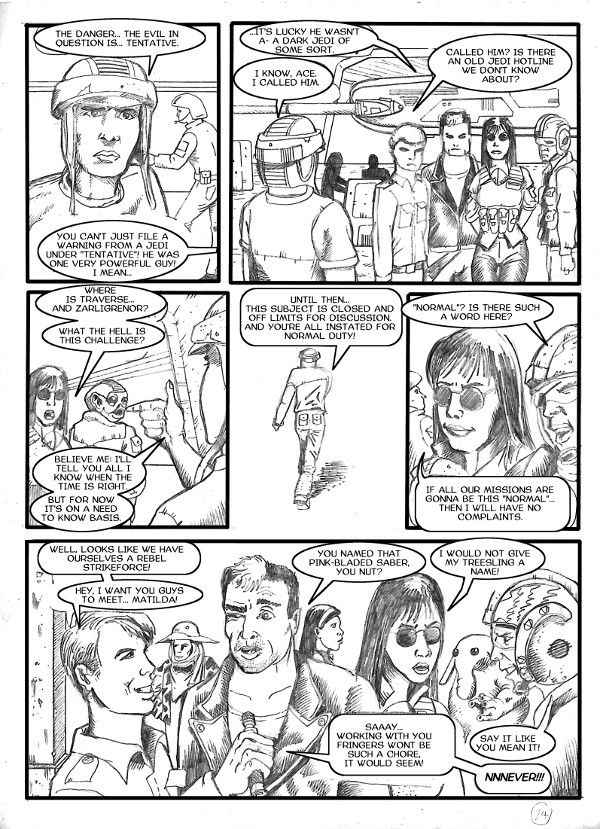 Page 24: I just had to do a coda followed by everyone gathering in front of Camera A for a stupid joke, a laugh, freeze frame and then credits.

The mission (and the game session) concludes. The campaign, however, continues.