Usually car problems come not within a month or two of one another. For us. So far. Until now.

It was Friday afternoon just before Solat Jumaat when the car engine refused to start. After prayers, with the help of some colleagues, I got a nearby mechanic to see to our immobilised vehicle. It turned out that the battery – nearly two years old – was as flat as a paper miniature.

Saturday was the lull in the storm. Little did we know that our car troubles for the week were not done yet.

The car returned from a short jaunt to refill our potable water bottles and hissed at me. Since the thermometer was broken, we were unsure if it was the radiator. After it cooled down, I attempted to refill the radiator and reversed the car a metre or so, away from the puddle I made in my refill attempt.

It was almost sundown on a Sunday. The car would have to be repaired the next day, and I had to cancel my morning class.

It took an entire Monday to fix the leak as it was leaking at a pipe that was connected to the engine. I also had to cancel my afternoon class.

At he end of the day, the coolant system was fixed.

But the mechanic pointed out that my front right tyre had a bulge. Frayed fibres were visible. It was the end of the day, so I could only replace the front tyres the next day.

I had a medical appointment first thing Tuesday morning. We wanted to have breakfast at the hospital but the cafeteria was shut down on account of their tender contract being lapsed. After the visit to the ENT clinic at the hospital, we looked for food before heading to the tyre shop. By lunch time, we had replaced both front tyres and the usable left tyre was made a spare, and all was right in the world.. until-

Upon our return from sending Irfan to school, the car scraped against a sharp jagged rock on the side of a small road near the back of the school… and tore a gash in it.

I had to cancel one of a replacement class from Monday. I thought I could replace the damaged tyre with the spare, but ultimately I could not – not without a missing metal bar I used as a lever to break the nuts’ torque in the past.

So I walked to the nearby mechanic, who told me to walk even further to reach a tyre shop in Jejawi.

The mechanics drove me home, used their tools to break the nuts’ torque and swapped the tyre for the spare so I could drive back to their workshop to buy a brand new undamaged tyre to replace the brand new severely damaged tyre. 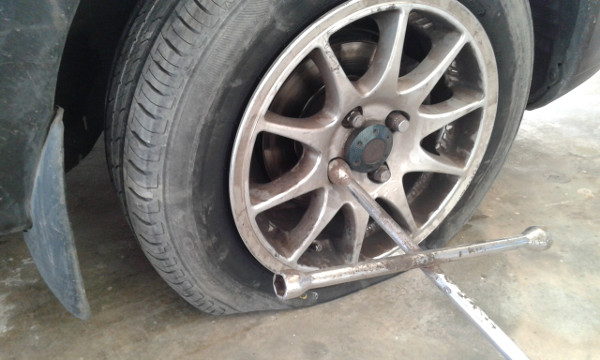 I tried to get things done as quickly as possible so I could make the afternoon class at Sungai Chuchuh.

After five days, a truckload of worries and many hundreds of ringgit (most of which we had to ask for monetary aid) the car crises finally ceased by the time it was-

When will the next crisis be? Stay tuned to find out.