At first Fantasy Flight Games released the Edge of the Empire rulebook which allowed players to be the scoundrels and smugglers of the galaxy. Then they released the Age of Rebellion rulebook for players to play soldiers and military spies. Finally, their final Star Wars role-playing game (RPG) rulebook is in my hands: Force and Destiny, where players are able to choose from a range of Jedi characters to play.

It had been released for almost two years now, but I was not able to get my hands on it. I was unable to grab it off Amazon because I possess no credit card. Nor was I able to use Paypal to order it from Book Depository because it has been “out of stock” for many months.

On a whim I offered to draw for the book and Erik Jensen on Google Plus accepted. So I drew this for him. And as payment I asked of him the Force and Destiny core rulebook. He sent me more than I bargained for. 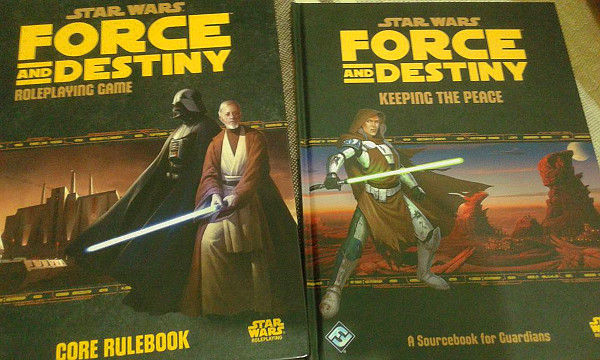 It’s the book on the left

From a cursory flipthrough of the book, I believe I can run diverse campaigns, from Tales of the Jedi/The Old Republic era 4000 years ago to a Sith-only games. The setting section of the book mentions Tython, the Great Hyperspace Wars and the Ulic Qel-Droma shenanigans. 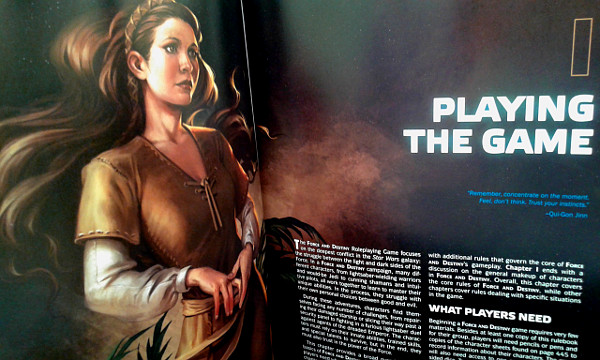 The rules are almost the same as the two books mentioned above, except for Dark Side rules with regards to using the Force Dice. I have not run this system for almost a year and this book is making me want to run it again. I wonder how would I integrate Force users in the campaign I ran for Irfan, Edged by the Empire, presently on hiatus. 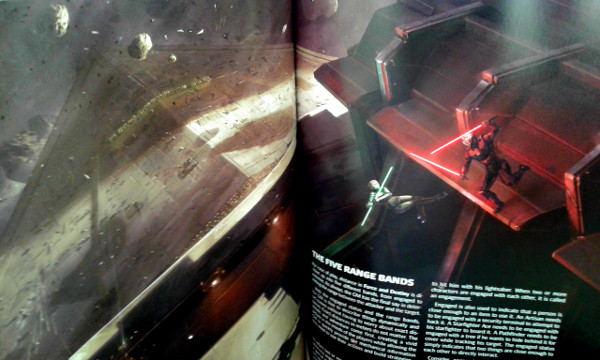 One thing is for sure: the artwork in this book is top notch. 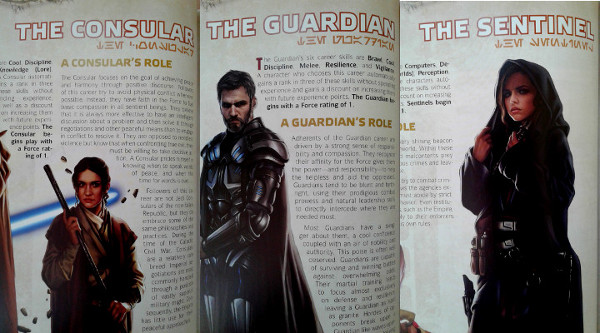 Three of the Jedi Careers available

Like the other books, there are six Careers available for players to choose from, all Force slingers, with three specialisations for each Career. Each Career sets a specific role for players and the specialisations allow for them to refine the characters more. The Careers are Consular (with the Healer, Niman Disciple and Sage specialisations), Guardian (Peacekeeper, Protector, Soresu Defender), Mystic (Advisor, Makashi Duelist, Seer), Seeker (Ataru Striker, Hunter, Pathfinder), Sentinel (Artisan, Shadow, Shien Expert) and Warrior (Aggressor, Shii-Cho Knight, Starfighter Ace).

I found it a nice touch that one specialisation in every career uses a term that had been invented earlier in other books. 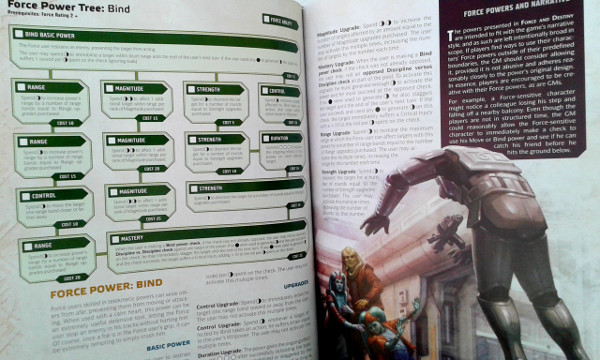 Buy! Buy! Buy! The Force Power and its upgrades, I mean

While each Career specialisation allows characters to purchase Force Talents, it is the Force Powers that grant players the really spectacular abilities such as Battle Meditation, Bind, Enhance, Foresee, Heal/Harm, Influence, Misdirect, Move, Protect/Unleash, Seek and Sense. A player rolls a number of Force Dice equal to their Force Rating and the results determine the Light Side or Dark Side Points you possess to commit, activating the power and even to upgrade its effect.

I am glad that the powers are named by their general effects instead of specific effects. For example, past systems have been defining Force Push, Force Throw, Force Blast, Force Purple Nurple and Force Crotch Kick as separate Force Powers when they are merely various applications of telekinesis. (Some of these might possibly be fake Force Powers I just made up though.) 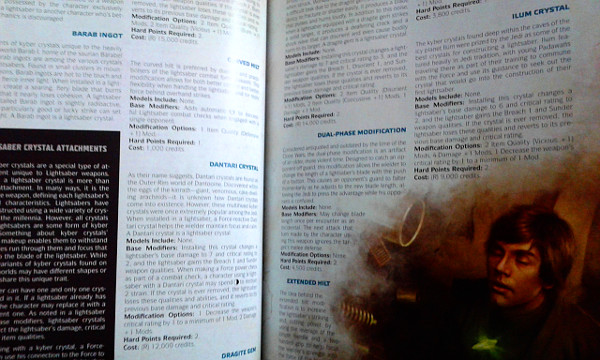 It’s that LCG artwork of Luke assembling his sabre

Besides rules to buy and upgrade your blasters, there is an entire section on creating and upgrading your lightsabre, which is not as clumsy or random as a blaster. An elegant weapon for a more civilized age. But no rules to construct the Inquisitor’s spinning lightsabre though. 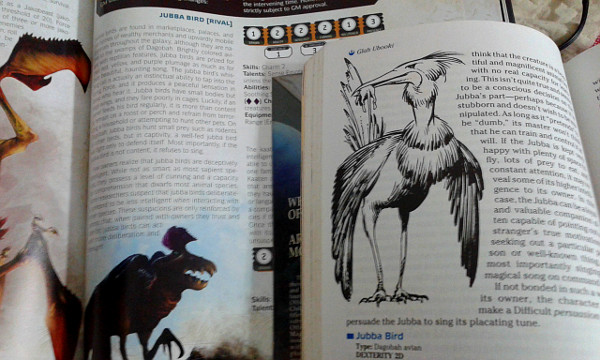 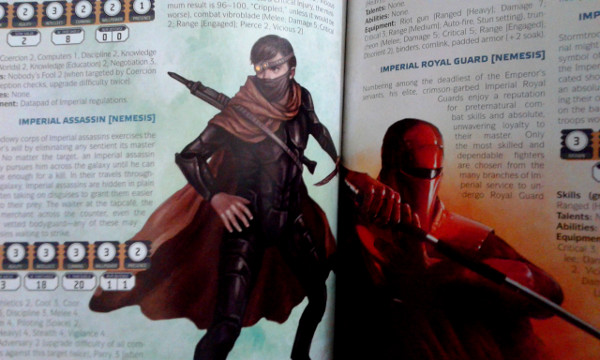 The book provides more Dark Side mooks to make the lives of the player characters more difficult. I mean, interesting. Interesting. There is even a section on the generation of an Imperial Inquisitor to be the group’s nemesis (like Star Wars Rebels) with suggestions of the type of character he or she is, Skills, Talents, equipment, etc. 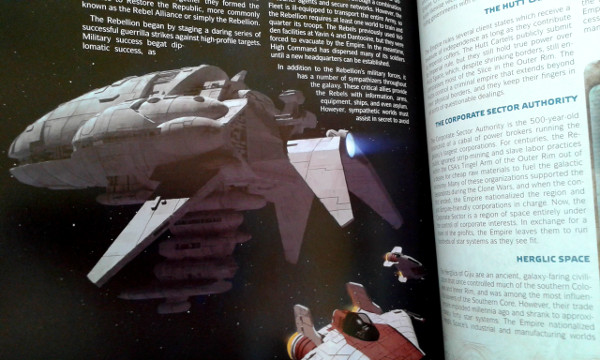 Suddenly an Assault Frigate appears, the variant design which first appeared in the Heir to the Empire comic adaptation, not the one from the Rebel Alliance Sourcebook. 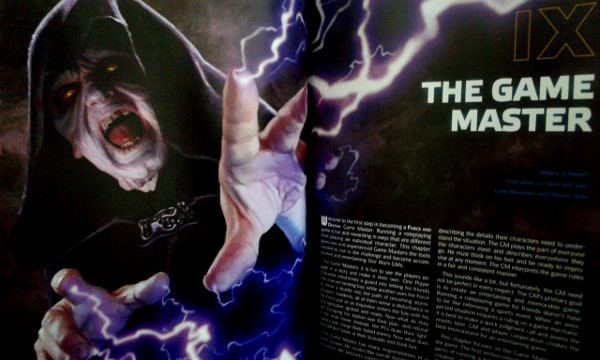 These two pages are not doing Game Masters any favours. Heh. 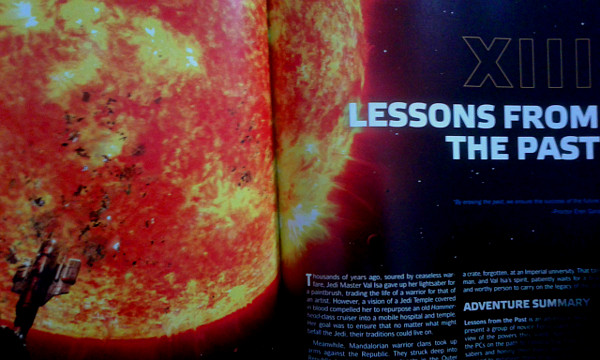 The final chapter houses the introductory adventure module, Lessons from the Past which has a surprise appearance of something all the way from the Tales of the Jedi: Dark Lords of the Sith comic series.

I have yet to generate a character much less run a session using this book because it has been a busy month. May the opportunity to play Force and Destiny open up for us soon.