The Man From Counter Possession

On this slow lazy Sunday afternoon, after binge watching the new series Stranger Things which I had described elsewhere as “totally a Laundry RPG scenario set in America, where Black Chamber operatives in the Department of Energy attempt to contain their screw up in a small town in Ohio”, I thought I would sit down with Irfan to generate a Laundry RPG character. And if I had the time, then I would run a short, simple scenario for him.

The Laundry RPG is based on Charles Stross’s The Laundry Files novel series, which is a delightful mashup of unspeakable horror and droll British humour, where the world of espionage meets the Cthulhu Mythos. It uses the Basic Role Playing (BRP) system used by Call of Cthulhu, RuneQuest, Pendragon and Stormbringer RPGs.

Irfan created a 25-year-old British grad student named Dustin Hopkins, a Capital Laundry Services operative from their Counter-possession Department, who is also a “thinker”. Without a proper character sheet, we wrote everything with a pencil on a blank piece of paper, and will transfer the stats to a charsheet proper once I have one printed out.

The Taxi Ride to a Gate

Dusty Hopkins, a recently trained and appointed Laundry field agent, was travelling in a taxi near midnight when his Necronomiphone rang. He had been authorised to investigate a sudden burst of thaumic energy in the outskirts of London. He was given a GPS location on his phone.

Later, he was deposited by the cab several hundred metres away from a closed and locked gate. The gate was located along a fence that surrounded the grounds of a computer software company. A cargo container, converted into a security office, had been planted within the fenced area right beside the gate.

Hopkins drew his standard issue Glock-17 and made sure that the GPS had put him at the correct location. He sneaked up to the security office and peered into the windows facing him. It was dark within, and he could see nothing.

Hopkins crept to the corner and viewed the locked gate. There he caught sight of a CCTV camera on a pole pointed at the area of the gate. Immediately, he slid his laptop out of his pack, using his preloaded penetration testing tools (and more) to scan for the wifi signal, seize control of the router and cracked into the CCTV network to turn off the camera.

He clambered over the gate. But then on the flip side his jacket sleeve was caught on a stray piece of the gate.

Hopkins quickly moved to the other side of the security office and peeked into the building. He peered into the window by the office entrance. It was dark within, but he spotted a green glow, like the sparse illumination from somebody’s mobile phone screen.

His gun pointed forward, he slowly opened the door.

He felt a push in his mind upon nearing the phone on the floor. He immediately suspected that the phone had unwittingly (or wittingly) accessed a web page from a server somewhere that was flashing a very high frequency signal through the green glow. It was transmitting information.

Even worse, it was possible that this signal might overwrite a human’s neural pathways and replace it with something else.

Where was the phone’s owner?

There he was. Skulking in the deep shadows. In a security guard’s uniform. Arms outstretched. Eyes glowing a shade of green similar to the phone. “Rrrrrr,” he said ineloquently.

Ignoring the pistol at his belt, the possessed guard shambled forward with his arms outstretched.

Hopkins had no desire to kill someone possessed by Level 1 entity. There was a chance he might still be alive. He tried to recall the counter-possession procedures and spells he was taught, but face-to-face with this entity he could not recall anything.

I’m not even carrying banishment rounds.

He did the only thing he could. He ran. To be precise, he briskly walked towards the door. He spoke into his Necronomiphone and requested backup, carefully but tersely spelling out his situation to the Laundry dispatch on the other side.

He was outside. Then he spun. The possessed guard was about to shamble out of his office. Why did I not close the door and lock it?

Now, the possessed guard was out in the open, rrrr-rrrr-rrrr-ing and shambling at Hopkins. Hopkins turned to the gate and rushed to it, climbing up and over it. The guard turned toward him and kept on coming. Until he was pushing himself into the gate, arms still outstretched, but not moving forward.

I suppose I should just stay here until backup arrives.

“”Ere! What’s with this Hallowe’en thing ‘ere?” shouted someone from behind him.

It was an elderly sort of chap. Inebriated too, by the smell of things. There might have been twigs and grass in the man’s hair, but it was too dark to be certain. The newcomer staggered toward the gate, and exclaimed, “Cor blimey! That’s a fantastic Hallowe’en costume, that is! And it ain’t even Hallowe’en!”

The man attempted to shake hands with the guard. Not a good idea as such intelligences can be transmitted from one human to another by touch.

Hopkins attempted to grapple with the man, but he sloughed off the young agent. The man was about to touch the guard’s hand when he lunged forward, grabbed him and pulled him away violently.

“Now look here,” the man slurred. “You have no right to do that. I know that I have every right to shake that man’s hand. If you get in my way one more time I will aaaay-aay-ayy-”

He slumped into the ground face first with two Taser leads in his back. The leads were connected to a recently discharged weapon which was being brandished by a heavily armed and armoured employee of the Laundry. More of these so-called Plumbers appeared out from the trees and bushes by the roadside, bristling with weaponry.

“Mister Hopkins, I presume?” said the Plumber squad commander, stepping over the unconscious drunk. “I suppose the guard there is in need of help?”

The skilled sorcerors among the Plumbers banished the entity swiftly and the medics tended to the guard.

“Good job, sir,” said the Plumber squad leader who very obviously mentioned the word “sir” without any real meaning to it. Meanwhile, his squad cleaned up everything.

All to soon, the young agent was safe at home. 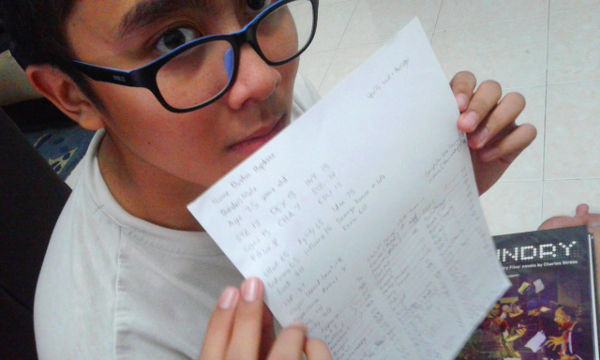 Doing his “laundry” after a fashion

Epilogue and a Beginning

The next day, Hopkins used his meagre mission resources to apply for several official Capital Laundry Services official government courses, which helped him to improve his shooting skills, his computer gaming skills (which he looked forward to the most) and gain more occult and thaumaturgical knowledge.

After his courses were completed, he received a new assignment: a mission to Malaysia.

Addendum (27 August 2018): I had planned on making this into a proper campaign which I haphazardly titled, Far Afield, earlier. But after much deliberations, I have now decided on the more apt campaign moniker Nasi Lemak Protocol.