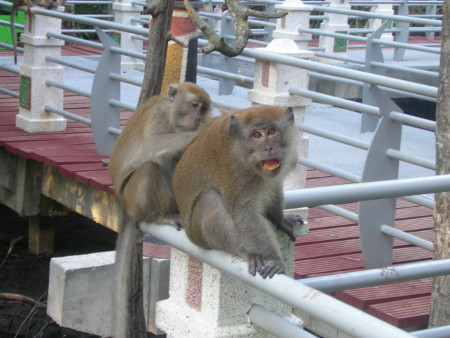 What are these monkeys up to? Where do they come from? Do they have insurance? 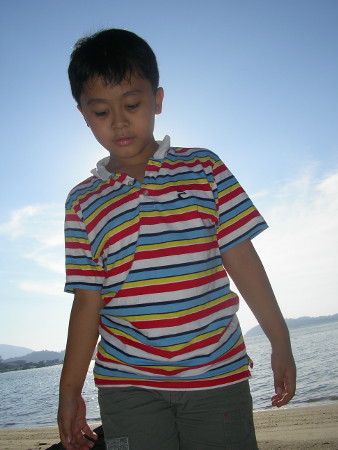 Flash from the front, late afternoon sun from the back

It was late afternoon when Irfan, Ain and I went for a drive toward Lumut. We drove through the little tourist town which was jam-packed with visitors from out of town. It was after all the school holidays. After getting through the traffic jam, we drove to the area beside the old defunct Lumut Hospital where we could walk on the sand, see ferries head out toward Pangkor Island and view frigates at their dock at the naval base. 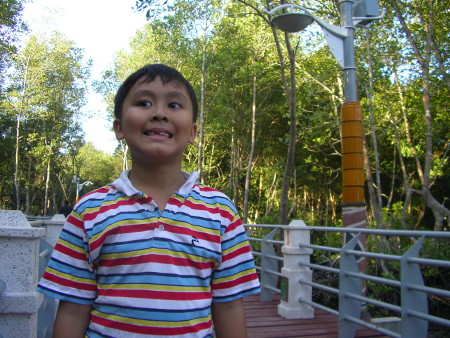 What lies in this mangrove swamp, I wonder

Then from Lumut we headed Sitiawan-wards but took a detour to the Mangrove Park. It looked far better than it used to. The walkways had been extended to other parts of the mangrove jungle and there were lamps everywhere. Everything looked shiny and tourist-friendly. There were lots of visitors that day, even a recently-married couple taking their outdoor photos for their wedding album there. 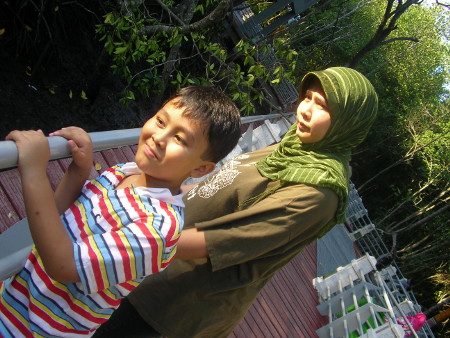 Irfan and Ummi gaze upon pneumatophores

Irfan, who did not grow up in this sort of environment, needed us to point out mudskippers, hermit crabs and other life forms which inhabit the swamp. There were many dozens of monkeys, who seem to understand that tourists bring eatables. The pictures here do not do justice to the actual number of their troupe. 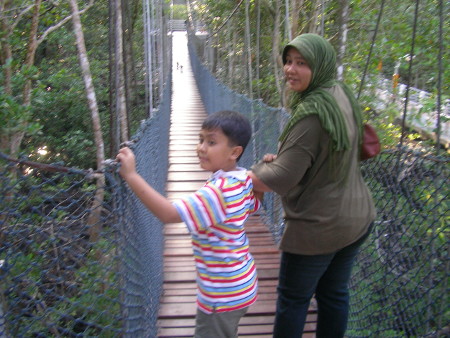 This was the new suspension bridge, which swayed and creaked as we walked upon it. You can see the ground level walkway on the right side of the photograph. Ain and Irfan didn’t have any phobias about it, but we passed by a young women who was in tears screaming with fear in the middle of the bridge. Her friends – to their amusement – were swaying the bridge even more to make her scream louder. 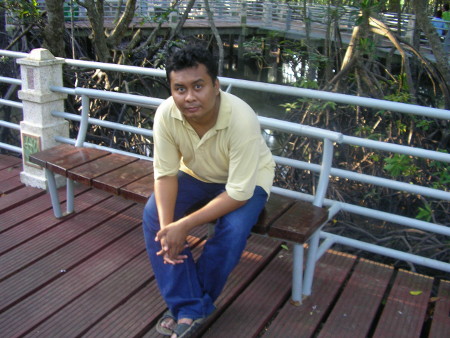 Abah Irfan gets a picture taken with a bunch of roots

Here was a wooden, root-like object just respiring in a stationary position. Behind him in the swamp are lots of mangrove trees. According to a plaque out of camera view to my left, there were archer fish in the water beneath us. I did not know that. 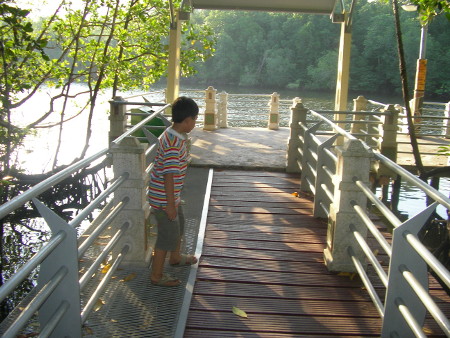 First riverside stop, complete with a pier for a small boat to dock

It was high tide. The water was perfect. There were fish in the water under the pier. I don’t usually see the monkeys come all the way out here. Once, perhaps 15 years ago, I saw a water snake swimming at the surface of the river at this spot. 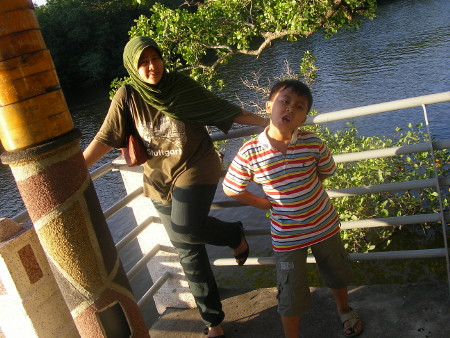 The second riverside stop is just a gazebo over the river

Irfan and Ain posed for another photo before we headed back to the car.