After three episodes of The Walking Dead on AMC, I thought I’d try a zombie game scenario with Irfan. I was itching to try out the free Microlite20 system, so I adapted it the M20 Modern plug-in to come up with a simple zombie apocalypse scenario. 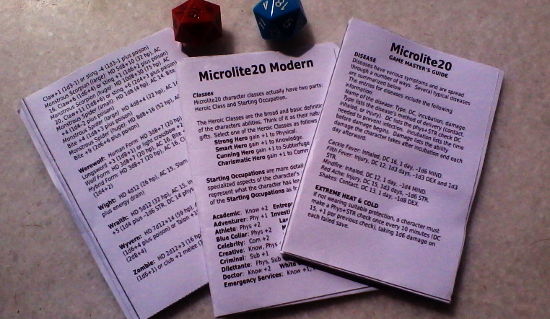 Irfan wanted to play a sheriff, he rolled up his three characteristics, chose a Smart Hero class (which gives him +1 to Knowledge) and took a Law Enforcement starting occupation (which gives him another +1 to Knowledge and a +1 to Physical). The game began with Irfan coming back to town from a three-day camp-out in the woods. He had with him a sniper rifle.

As he walked up the road to town, he spotted a car at the roadside. Upon a closer look, he noticed a figure slumped back in the seat.

It was a corpse, dead for perhaps a day or two. He opened the door and the corpse suddenly sat up and lunged toward Irfan to bite him. Irfan unslung his rifle and shot at its left shoulder, taking its entire arm off. But it was still coming for him, staggering ominously out of the car. A second shot to its head stopped it dead.

Irfan jogged up to the first junction at the outskirts of the town and he was two walking corpses shambling toward him from the woods to his left, and another two from the building to his right. He ran towards the a two-story building ahead of him, but another pair of the undead came out of the alley beside it and blocked his path to the door. He shot one down, decided to conserve his bullets and drew his machete to hack at the other, but the melee took too long. The other zombies were getting close.

He tried evading their outstretched arms and ran into the store, closed the door behind him.

Ignoring the clothes on sale in the deserted store, he went up to the second floor where he found a bathroom where he decided to pee and a 4 fifty caliber bullets in another room which can be used with his sniper rifle. Then, looking out the window, he was a pair of frightened young boys on the roof of the adjacent building. He had to save them somehow.

Seeing that he was trapped in the store by a growing number of zombies most of which were attracted by the sound of the gunshots in front of the store, he decided to make is escape by jumping out the second story window out back and sprained his leg.

He hobbled quickly to the other store – which sold hardware – as the undead slowly shambled toward him. The front doors were unlocked and he opened it. Something came lunging at him from the darkness within. Irfan used his machete to slash at it but it managed to bite him. Fortunately, it only managed to get a mouthful of sleeve from his shirt! Another zombie had shambled in through the front door. Irfan twisted out of its way to shut and lock the door. Then he killed both zombies with his sniper rifle.

He quickly climbed up and reached the kids, who said they had been trapped up here without any food and water for two days. He looked in the alley and saw a Chevy Camaro. The kids said that if they were older they’d have used the car to escape.

Irfan ran back down to the hardware store and scrounged up some gear: a fire axe and a box of 10 fifty calibre rounds for his rifle. He told the kids to wait as he went to the car to try to open up the door. But it was locked and the key, he noticed, was inside. Two zombies shambled close, Irfan quickly lopped off the head of one, but missed the other. It tried to bite his right arm, but instead tore away his other shirt sleeve.

Suddenly an arrow struck deep into its head and it fell. One of the kids had found a longbow in the store with a cache of arrows. Irfan quickly picked the car door’s lock and they all quickly climbed inside as the alley began to be filled with zombies.

Irfan turned the key, started the engine and they all drove away – with screeching tires – from the town, safe for now.

What happens next?  Tune in for the next exciting adventures of Stuff Happens to Sheriff Irfan.

In hindsight, I believe I would replace the stats for the standard fantasy M20 zombies with the following stats for the next game: