What I miss most about Sitiawan can be summed up thusly:

I miss watching movies (at the big screen and home theatre) and discussing them from a geek’s point of view.

I miss cycling to Teluk Batik and walking back on foot because of a flat bicycle tyre.

I miss going on adventures in and around the mangrove swamps of Kampung Acheh, looking at mudskippers and paddling rented canoes and avoiding water snakes.

I miss camping out at the sandy beaches of Pangkor’s Coral Bay, taking the ferry to and from the island and lying on the sand at night to count shooting stars.

I miss camping out behind the District Scout House at the mangrove swamps of Kampung Sitiawan, getting up early at dawn to cycle around Sitiawan before everyone wakes up and walking in the middle of the night to the nearby cafe to buy air sirap when thirsty.

I miss a really good friend with whom I shared all these experiences, the only person who never left Sitiawan since school.

Rest In Peace, Ming Fang ol’ buddy. Hope to see you in another lifetime. 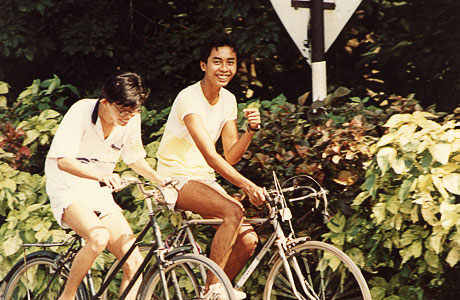 This photo was taken as we were cycling inbound to Simpang Empat from Taman Pegawai on some weekend morning. Where those greenery were, now the Fajar supermarket stands. Irfan’s Atok was across the road in the car at the old wet market, and he happened to have his handy-dandy camera with him.