“That’s not even funny, don’t joke about stress dice!

I admire its purity

I have been a fan of the Alien cinematic universe ever since I read the movie novelisation when I was 13. A couple of months later, they showed the movie on television. I remember we as a family slept in the living room (like a sleepover) and I was the only one who stayed way after midnight for the film to end. 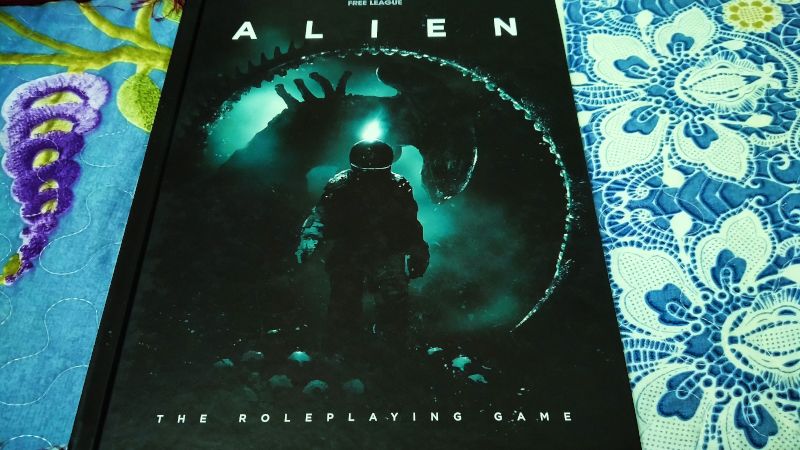 Then next year, I saw Aliens in a cinema in Ipoh. That cemented my love for the stories that can be told in the setting, as well as the grimy, dirty aesthetic of the future.

The Alien RPG was released 2 years ago. I had been trying to save enough money to purchase it for over a year. When I had some extra cash, it was out of stock at the online book store. When they restocked the book, I have no more extra spending money, that is, until this month! 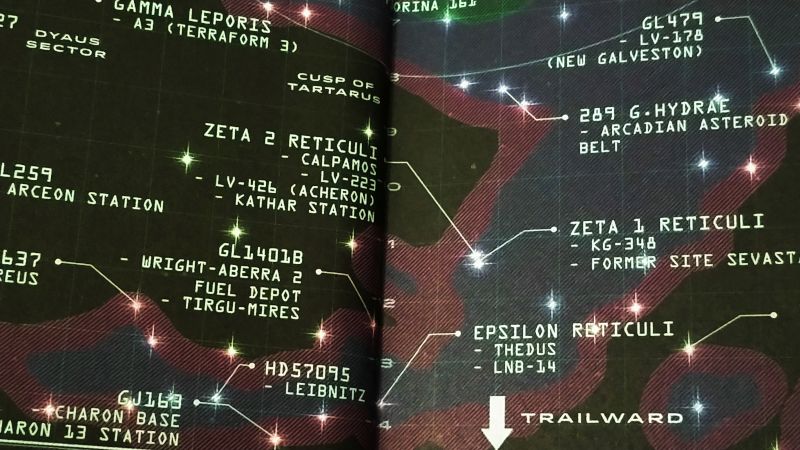 A map is useful

Like Coriolis, the Alien RPG uses Free League’s Year Zero System. It only uses six-sided dice (D6s). Add your attribute and your skill, apply bonus and penalty dice, roll and count the 6s. One 6 is a success, but more 6s allow the players to do more stuff.

The best feature in the rules is the Stress Dice. If a character is has a Stress of 2, then the player rolls an additional two D6s to their pool. They roll better because of maybe adrenaline, or maybe they are fatalistic as hell. But if the Stress Dice comes up a 1, then the character will Panic, and perform things that is uncontrollable because… you know, panic.

So then one should roll the Panic die, which is a single D6 result plus the player’s present Stress level, then check a table to see if they can hold it together or go catatonic (or every other effect in between). 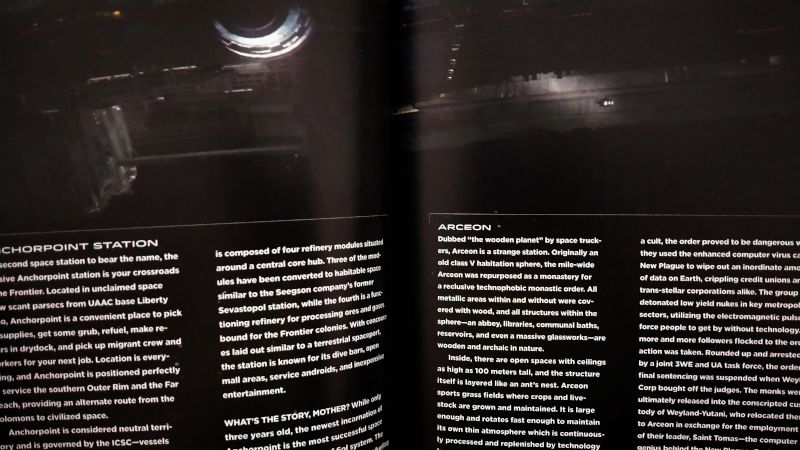 Every piece of tech from the first three Alien movies are in the book, from Ripley’s harpoon gun in the Narcissus to Newt’s family’s tractor seen in Aliens: Special Edition. I am also pleasantly surprised that a lot of elements are also drawn from ancillary literature. Locations such as Anchorpoint Station and Arceon (see image above) from Vincent Ward’s unproduced Alien 3 script are referenced. Planets like Tanaka from the Aliens: Space Marines comic, New Galveston from Alien: Sea of Sorrow, and Sphacteria from Aliens: Dead Orbit also make appearances. 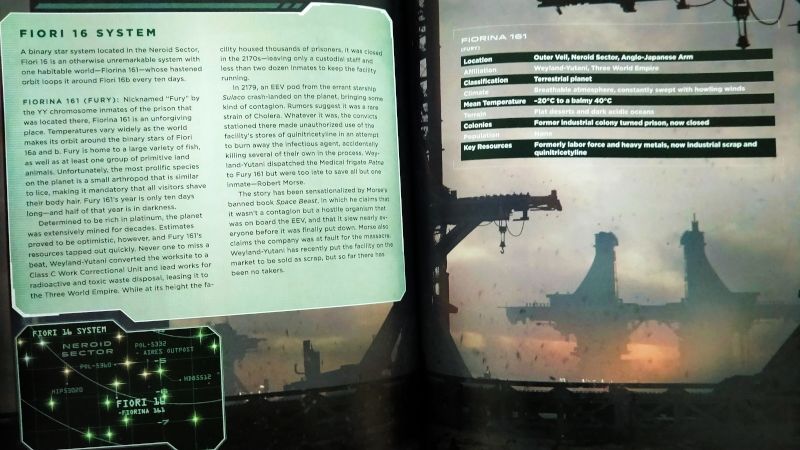 If we ain’t out of here in ten minutes, we won’t need no rocket to fly through space

Gamemasters (GMs) are called “Game Mothers” (also GMs) in this game, because of the AI MU/TH/UR 6000 “Mother” installed aboard the USCSS Nostromo in Alien. Players can play a Colonial Marine, a Colonial Marshal, a Company Agent, a Kid (no fizzyglug though), a Medic, an Officer, a Pilot, a Roughneck or a Scientist. Any combination of these characters should be able to generate a group of people stuck out there in space under high stress conditions added to the threat of a xenomorph type XX-121.

However there are no rules for Oyen to be able to play the equivalent of Jones the cat. 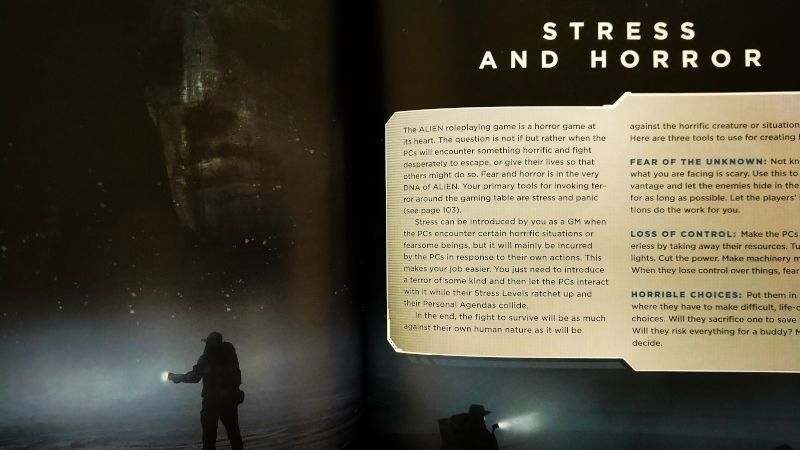 Horror works if it is a human story

There are suggestions on how to run a shorter but more intense and shorter Cinematic Play or the longer, slower burn Campaign Play. One runs like a one-shot movie, the other like a TV series. Cinematic Play allows players to be able to play special one-shot events and be satisfied at their characters’ death during the session. Wait. How many survivors at the end of each Alien movie again? 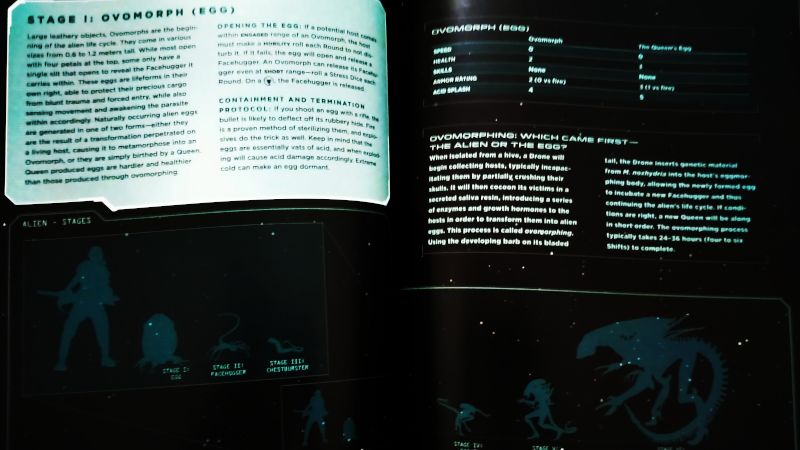 Bones are bent outward, like he exploded from inside

The bestiary section features a number of aliens (and their stages of development) from the first two movies: ovomorph (eggs), facehugger, chestburster, scout, soldier, queen. Also included are write-ups on the neomorphs and the neomorph bloodbursters from Alien: Covenant. There is also a multi-page write up of the Engineers from Alien and Prometheus, but there are no stats written for them.

Something to note is that there are no write-ups for the hammerpede, trilobite and the Deacon do not appear. Perhaps all the Prometheus xenomorphs will appear in a future supplement.

Among other extrasolar life forms listed are the swarm from Aliens: Bug Hunt anthology, the lion worm from Alien: Echo novel and Tanakan scorpionids adapted from the Aliens: Space Marines comic book. 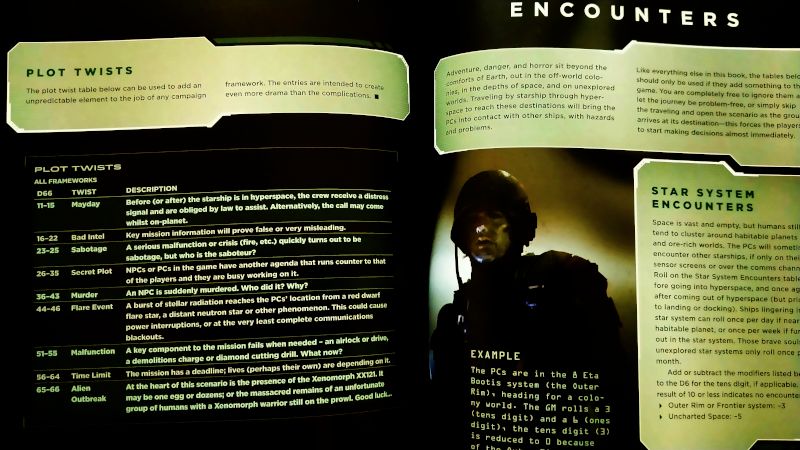 We think we should discuss the bonus situation

There is a nice section on creating whole star systems with random planets, moons and their terrain and such, and a random job table that includes random complication and threats to mix things up.

Finally, the scenario at the end of the book is entitled Hope’s Last Day in reference to Hadley’s Hope, the colony on the moon Acheron (LV-426) in the movie Aliens. 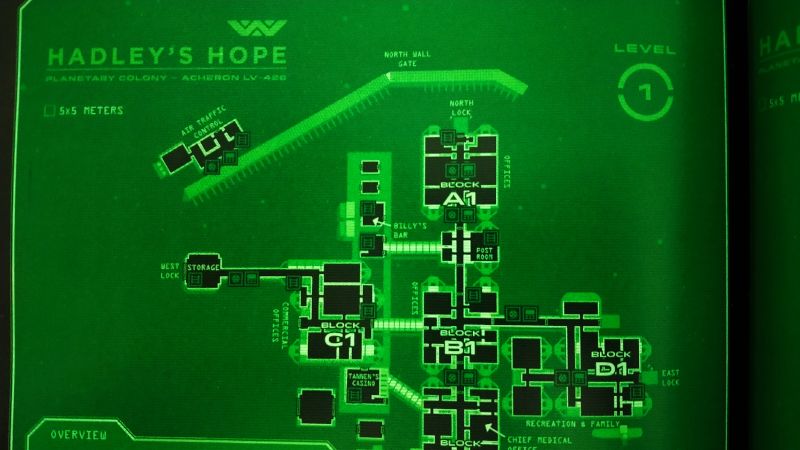 Here are some things that I believe could be included in an Alien RPG scenario.

There should be a number of NPCs with different roles, like protector, confidante, secret traitor. This is because horror is human. So things that add up to cause horror should originate more from people. The xenos are just condiment and flavouring.

Despair unto the player characters should be from things like administrators who rather feed them to the lions than lose that sweet annual bonus. And bosses who are rewarded even as they are clearly incompetent because of nepotism. And family members and loved ones who sacrifice themselves to save you because someone was unwilling to spend the extra money for security and such.

There is nothing better than to play this to see how it runs. So I hope I have the opportunity to run this  soon.