It was during the Enteague Sector campaign for the Star Wars Roleplaying Game which I GMed perhaps fifteen years ago. A new team of the Strikeforce Enteague, consisting of younger members, had to investigate the Malc Toldreyn Library on the planet Neeuderni to solve the campaign mystery arc of why an Imperial Admiral (no names here, cause in retrospect the NPC naming convention I used at around this time sucked) wanted Ham Slacker the tongue-tied engineer dead.

Naturally, the Imperials attacked during the investigation. Radio communications on and around the planet was jammed. It turned out that the Imps had deployed a Diamondback droid which is designed to jam planetary and interplanetary communications. The group borrowed the local defence forces’ CloakShape fighters to attack the droid, which had its own defences in the form of anti-fighter cannons.

I’ve rewritten down the D6 stats slightly modified from my original pencil notes and uploaded them to Phil Hatfield’s site D6 Universe for posterity’s sake.

I’ve reproduced it here for my own reference.

A lesser known droid manufactured by Arakyd Industries is the Diamondback orbital jamming droid. Used almost exclusively by Imperial Ubiqtorate, the small shieldless Diamondbacks are usually ejected into orbit around planets where it is crucial that their intra- and interplanetary radio and hyperwave communications are to be disrupted, pending arrival of a proper Imperial military incursion force. Usually enough droids are deployed around a planet at synchronous orbit to ensure full disruption coverage of the world. No calls for external aid nor communications to coordinate surface forces to repel an incursion can be made.

The Diamondback is primarily a dome with built-in photoreceptors and other EM sensors. The jamming antenna is mounted at the end of a pylon which extends downwards from the bottom of the dome. Also fixed upon gimbals on the pylon is a small but effective anti-starfighter quad laser cannon, whose power is fed from a generator placed within the pylon. Finally, smaller comm rectennae allows for the droid to communicate with other Diamondbacks or a command ship. 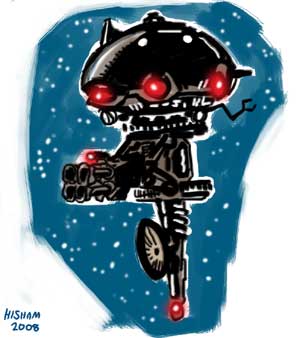 GM Notes: The Diamondbacks uses the blaster skill to shoot at incoming ships when their cover are blown. To attempt to cut through the jamming, roll your PC’s communications skill against the droid’s communication skill as the difficulty number. The jamming only works in line of sight. If only one droid is jamming the planet, a person on the far side will still be able to communicate.

I should reproduce some of my game notes here and at D6 Universe so that they don’t become lost in case of a second wave of termite attack.