The Azamar RPG Players’ Guide has been released by Wicked North Games and can now be purchased from several online sources.

Here’s an excerpt from the Introduction chapter of the book: 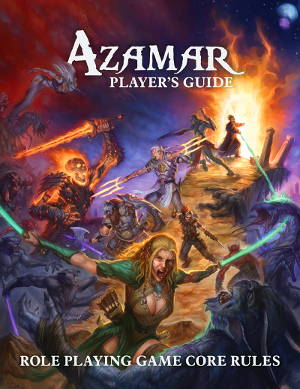 Azamar is a world where many worlds touch and overlap through Magic.

Each world separated by a barrier the people of Azamar call a Fabric. The Fabric is not something most people can touch or understand. Most commonly used for referring to the Fabric between Azamar and the Blur, a world overlapped with Azamar where the inhabitants are immensely powerful and deadly magical beings known as Fiends. The Fiends serve a council of some kind referred to as the Fiend Lords. At any given time, ten Fiend Lords direct and govern the other Fiends in the Blur.

While the Fabric is not tangible, the Blur-Touched or those who can perceive Magic may concentrate and see where damage exists or holes are open. When damage comes to the Fabric, it reverberates and releases Magical energies, if uncontrolled, have physical or otherwise powerful repercussions capable of damaging the breadth of Azamar.

Azamar can be purchased online at two locations:

If you have the inclination and the cash to spare, try out the Azamar RPG which runs on the Cinema6 system which is the offshoot of the OpenD6 system.

Click here to check out my comprehensive Azamar gallery on deviantArt.