The night before we headed home to Kuala Lumpur from Pasir Mas, Irfan and I decided to try out the BareBones Fantasy RPG.

BareBones Fantasy (BBF) is a simple – but intrinsically complete and very customisable – role-playing game engine that allows gamemasters and players to run adventures in the vein of classic Tolkienesque fantasy worlds, with Elves and Dwarves and Halflings and Orcs. I was sent the beta version for my DwD Studios art commission job, so I had a copy printed out the week earlier.

It runs on DwD Studios’ own D00Lite system, which only uses the d10 dice either as percentile rolls or total-up rolls. 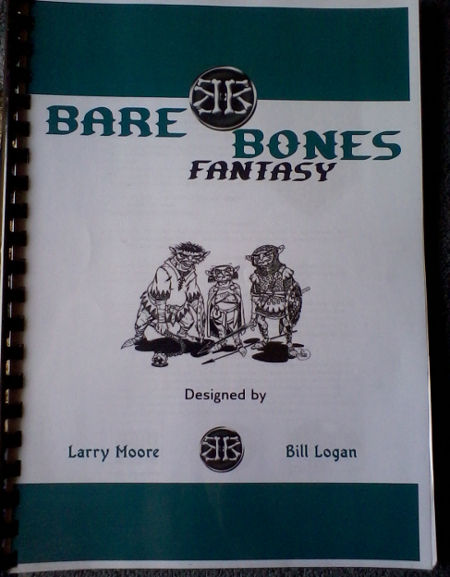 Note: The above is not the actual cover, but something I put together quickly and had printed! Click here to view the skilfully painted cover by Eric Quigley, and to read more about BareBones Fantasy at the DwD Studios’ website.

Character generation was easy enough. In less than 30 minutes both Irfan and I had our characters rolled up. Irfan played Jake Hastur the halfling spellcaster/warrrior and I also played Finn Riverwyld, the human scholar/scout as well as gamemastering it. No prizes for guessing where the names came from. 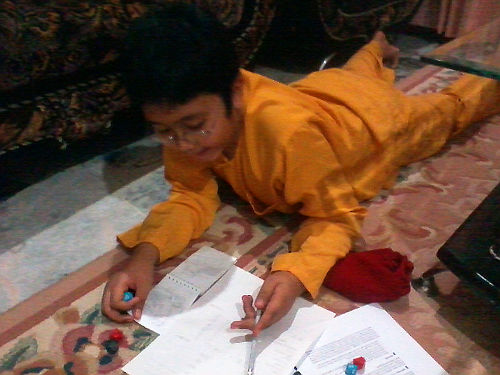 One great feature of the book is a random adventure generator. In less than half a dozen d% rolls, you’d have a general idea of the places you will be going and the things you need to do. I rolled once and determined that I had three areas to adventure in. So I rolled again, one for each area. The first area was a “beautiful temple” and the task there was “collection.” The second was “cramped hideout” and the task was “salvation”. We had to perform a “communication” task in a “motion pyramid” in the final area.

Finn and Jake were new adventurers in Kingsbridge, the capital of the Keranak province. A royal city official tasked them with sending a communication scroll to the Priest of the Bleak Pyramid, a magical pyramid construct that could move, or teleport to random locations all over the Keranak Kingdom. (Originally I named it the Black Stone Pyramid. Bleh!) The pyramid was now in the southern shore of Keranak, but will teleport to an unknown location in three days.

Day One: Finn and Jake needed to purchase a horse, but they had no gold. So they take up a quest given to them by an elderly spellcaster to retrieve the Emerald Mango from the Temple of the Glowfruit six hours walk southeast of Kingsbridge. (I had been looking at actual mangoes on trees earlier that day.) The directions given to them allowed them to enter a portal and into a valley filled will unbelievably lush greenery with many-coloured flowers and fruits of all shapes and sizes. At the deserted but beautiful Temple of the Glowfruit, Finn finds an illusory wall. They step through, fight a horde of dire rats successfully mostly thanks to Jake’s spellcasting of lightning bolts. There was a mango tree in a large open room at the middle of the temple. A single mango grew off it, made of emerald. Jake took it and they rush out as the temple shook and debris fell.

Debris fell on Finn and injured him badly. Soon, they returned to Kingsbridge where the spellcaster marvelled at how they survived. He said none of the other parties ever returned.

With the gold they earned, they got a healer to heal Finn, then bought a horse. Jake named the horse Jack.

Day Two: Finn and Jake rode Jack southward toward the Bleak Pyramid and en route they were waylaid by robbers in the desert. The robbers seemed weak and desperate, and soon they discovered that their hideout – a warren of dark and cramped caves to the east – had been overrun by monsters after one of them was digging new rooms in the tunnels. Some of the robbers were killed and the rest ran for their lives, leaving behind a lot of gear and food. Finn and Jake promised to rid their hideout of the monsters in exchange for their freedom and some food.

Delving deep into the cramped warrens and caverns, they discovered the invaders were zombies. They were told there were six, however the robbers who were bitten by them also turned and added to the problem. Although Jake’s lightning bolts were effective he insisted on using his axe. Finn’s spear was not effective at all. (Combat with BFF was fast and the Offensive Strike spell with the lightning bolt trappings was deadly. In some cases where Finn was close to the target, I gave Irfan a 10% margin of error. For example if his Spellcasting score was 46%, anything below 46 was a hit. However, between 37-46, Finn would also be damaged by the spell.)

It was discovered that the robbers had dug into another, more ancient cavern. It was here where the zombies were waiting, hungry. There was a glowing green sword stuck into the bones of a dead wizard on a dais in the middle of the chamber. Finn, being a scholar, knew what curse was at work and what needed to be done. Just before an injured Finn was bitten, Jake pulled the sword out. It stopped glowing and crumbled to dust. All the zombies fell to the ground, dead.

Finn and Jake spent the night with the grateful robbers in their now-safe hideout. (Finn’s Body Points had depleted til there was only one left. Another blow to the head with a pebble would kill him at this point.)

Day Three: (Because it was nearly midnight real time, and we were both tired) Jake and Finn arrived at the Bleak Pyramid with the scroll near sunset. They enter and were confronted with guardian golems! Jake announced their purpose there and the Priest of the Bleak Pyramid appeared. He thanked them for the scroll and left the chamber swiftly. The pyramid began to shudder. The adventurers rushed out and just as the sun set, the entire gigantic pyramid disappeared in a wink of an eye leaving behind bare earth.

Finn and Jake then leisurely returned home on Jack, where their quest would be repaid in gold by the Kingsbridge city official.

It was fun, and the zombie battle was very exciting. Finn threw his spear at one undead, losing his weapon. Then ran away from the zombie, who chased him with the spear impaled right through its chest.

I will no doubt run another game with Irfan soon.