Among the many entertaining obstacles you could use as challenges for players of the Star Wars RPG are creatures. Defeating a critter is a natural Star Wars storytelling element, as can be seen in the movies. A host of new and original creatures had been created in the Star Wars The Clone Wars animated series, such as mastiff phalones, skalders, rupings and gutkurrs. Most have not had official roleplaying stats to them for gamemasters to use.

However, here are my home-made stats of the blixus, a cephalopod with huge, flailing tentacles, a crab-like shell and and a ravenous maw as it appeared in the fourth season episode “Kidnapped”.

A fun fact: the blixus first appeared in the Dark Horse Comics’ Star Wars The Clone Wars #2 “Slave Traders of Zygerria” written by Henry Gilroy. This story arc was adapted into the three-episode Zygerrian slavers arc of which “Kidnapped” was the first.

Here are D6 and Edge of the Empire stats for the blixus. Also, let’s assume these stats are for the “blue-speckled, yellow-bellied blixus” that originate from the Tingel Arm and are now widespread on a thousand other systems in the Outer Rim Territories. When the official blixus stats are eventually published, they would not supercede this subspecies of the creature 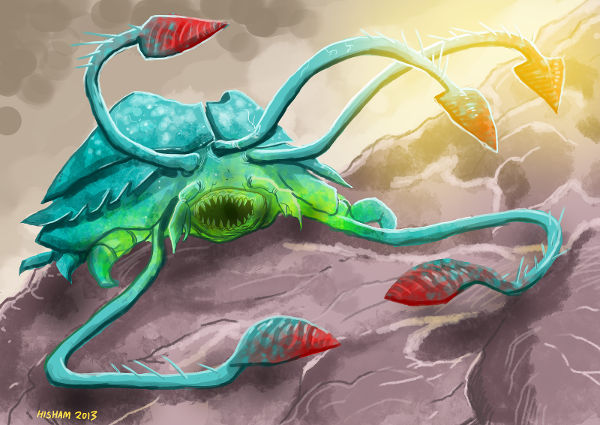 They make good sushi though

Star Wars Edge of the Empire

Note: I still so not have the Edge of the Empire core rulebook, so the stats might be a bit wonky.