Upon arriving home from Pasir Mas after an overnight drive via Jeli, Gerik and Kuala Kangsar, I discovered this note from the post office right outside the door of the house. 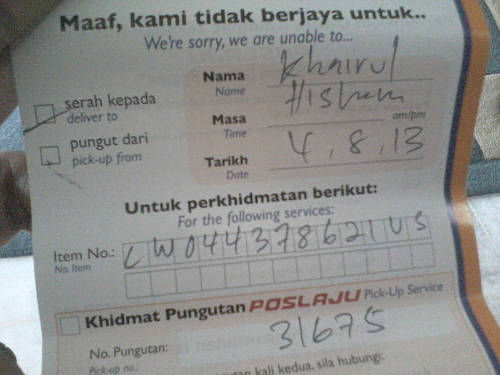 They never arrive when I’m at home

So Irfan and I went to pick it up. It was a box and I was ecstatic at the size, shape and weight of it. Even if I was cautious about it. With my luck, it could have easily been some court summons because I’d accidentally strangled some duck to death 15 years ago or some weird thing like that. 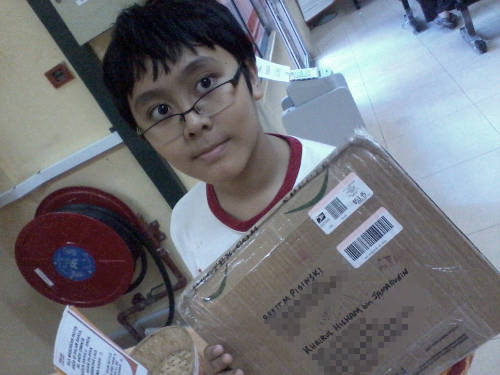 It’s from Brett who lives at some pixellated address

But I was happy to discover that it was indeed the Star Wars Edge of the Empire, all 2000 tonnes and 70,000 pages of it, sent by Jeremy and Brett from New Hampshire as a tradeoff for the steampunk Westward RPG artwork I did for them. 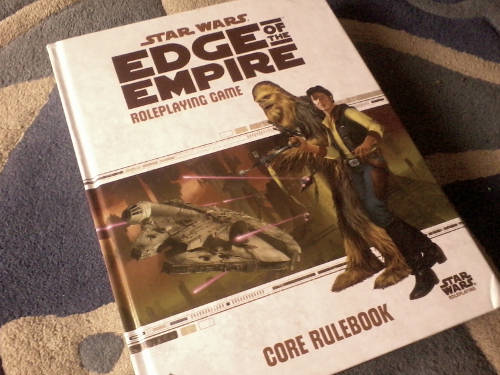 Here is the Core Rulebook arrayed with the two Beginner Game booklet and the Long Arm of the Hutt free scenario. 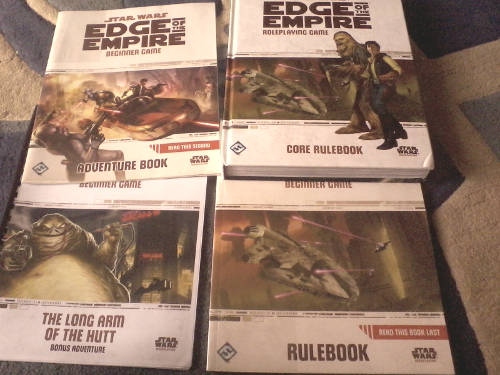 Here it is with its brothers

All the official Star Wars RPG core rule books from the original West End Games‘ Star Wars RPG first edition, then the Second Edition with the blue cover and Vader’s head, then the Second Edition Revised and Expanded with the Millennium Falcon in the foreground and the Death Star in the back. Also, two editions from Wizards of the Coast, the Revised Core Rulebook with the painted cover and the Saga Edition with the brown Vader cover. They all surround their newest cousin, the Edge of the Empire RPG Core Rulebook from Fantasy Flight Games. The only rulebook absent – and one I do not posses – is WOTC’s Original Core Rulebook. 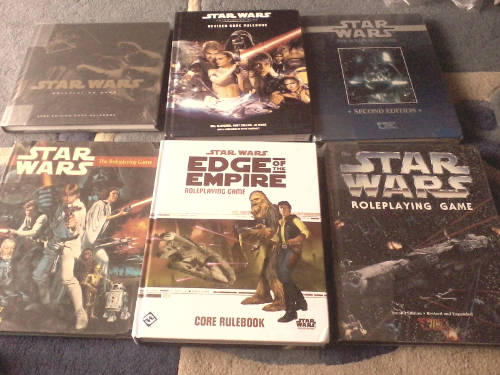 Here it is surrounded by its older cousins

This is a spectacular galactic map that takes into account elements from the extensively researched Star Wars Essential Atlas. I love the fact that many facets of the Star Wars universe pertaining to Edge of the Empire campaigns are detailed in the rulebook: everything from the Empire (Military, ISB, Ubiqtorate, COMPNOR), the Hutts, Black Sun, the Zann Consortium, the Tenloss Syndicate, all the Houses in the Bounty Hunter’s Guild, Corporate Sector Authority, BoSS, IOCI – most of these created and/or elaborated upon by West End Games writers for the D6-version of the Star Wars RPG – and how the Rebellion might cross paths with smugglers, scouts and bounty hunters. 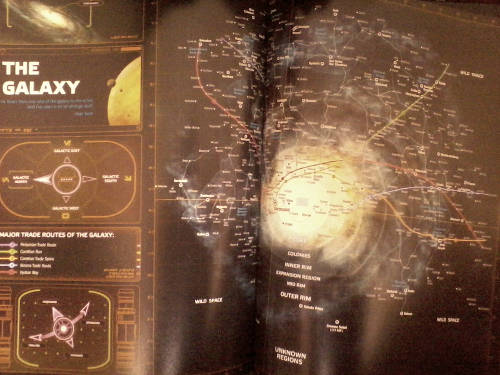 I want a poster of this map 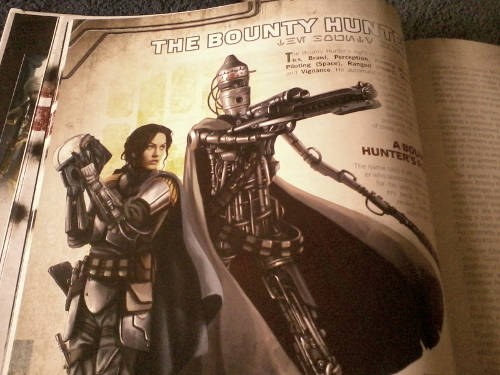 Or play a hired gun! Like every other player character that’s played in any of my previous Star Wars RPG campaigns who likes to blow stuff up! Which is a lot! They would salivate at the idea of throwing a thermal detonator! Or taking down an enemy fighter with a missile! Or firing an E-Web into crowd of bad guys! 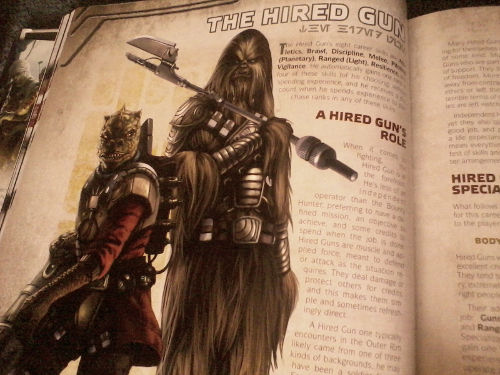 This one is new, like Gallandro in Han Solo’s Revenge and Han Solo and the Lost Legacy

Now excuse me I have to crash. I’ve spent the last 24 hours awake, and 9 hours of those driving almost non-stop over the mountains throughout the entire night with only a single fifteen minute nap period in the interim.