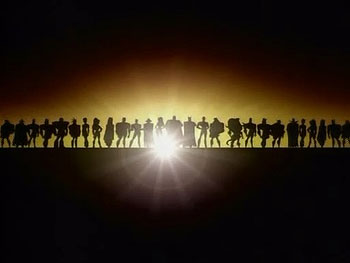 That’s a whole bunch of heroes, that is

I’ve been a comic book reader ever since I can remember. One of the best spin-offs from the DC Universe would be the DC Animated Universe, beginning with Batman: The Animated Series. The current series set in the same universe is the Justice League Unlimited, based on the Justice League of America comic book, where dozens of heroes pull together to keep Earth safe from evil from both within and without from their space station, the Watchtower. Sounds cheesy? Not if you watch it and catch the excellently written dialogue and tightly storyboarded animation that comes with it. JLU has become one of my favourite animated show ever. Here is a review of 3 of 4 of the Cadmus arc episodes, “Question Authority”, “Flashpoint” and “Panic In The Sky.”. 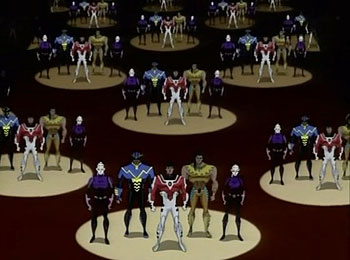 Project Cadmus is no small matter in the comics. Among other things, it created the genetically modified clone which became the modern age Superboy. In the DCAU (Animated Universe), Cadmus is a government project tasked with creating its own cloned superhumans using DNA from our regular heroes. From Supergirl, they created Galatea, who resembles Power Girl from the comics. The DCAU Cadmus is led by Amanda Waller, whom in the comics led the Suicide Squad. But this version of Cadmus also has Task Force X, which is the other name of Suicide Squad so everything levels out okay.

So, the events that led up to the this four-episode story arc that almost led to the end of the world began when conspiracy theory nut The Question infiltrates Cadmus and steals data that led him to believe that what happened in an alternate dimension version of the Justice League (known as the Justice Lords), where Superman killed US President Lex Luthor with his heat vision, will also come true in the regular universe. Believed to be reformed, the regular version of Luthor is also a prime candidate for US presidency, and also an ally and a under-the-counter funder of Cadmus for their ultratech hardware. After confronting Superman with this fact and gets brushed off, he confronts Luthor, who displays unnatural superhuman strength to take out the Question and have Cadmus torture him to find out what he learnt from the data he stole.

Huntress gets Superman’s help to bust into Cadmus to rescue the Question. Captain Atom, his military commission reactivated and assigned to Cadmus, tries to stop Superman in vain. They leave with the Question and an unconscious Captain Atom. Mrs Waller calls Luthor to tell him of this, and Luthor secretly remote hijacks the Watchtower’s orbital cannon to destroy Cadmus headquarters in New Mexico, pinning the blame automatically on the JLU.

But one step ahead of anyone, Mrs. Waller has already evacuated Cadmus headquarters after their location was compromised by the Justice League. She informs the president who puts her on high alert, pending investigation of the Justice League cannon misfire. Meanwhile, the founding members of the JLU offer to put themselves in US custody, also pending investigation, putting the second stringers like Supergirl and Steel in charge of the Watchtower. All save Batman, who refuses to surrender in a fantastic exchange of dialogue over the radio with Superman and the others. 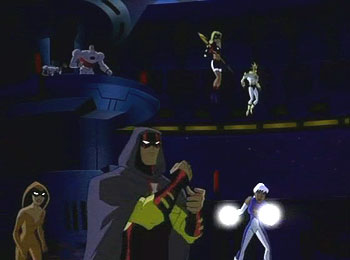 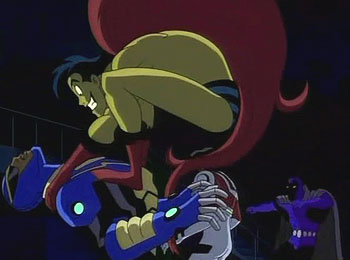 That’s Obsidian in the background

…The Creeper (who delivers one hell of a head butt) 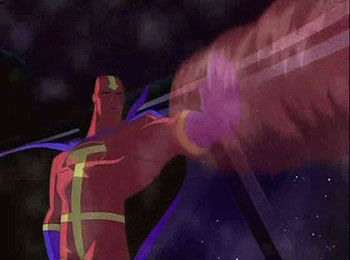 …and Red Tornado (who defeats three Wind Dragons in a spectacular stand-off). 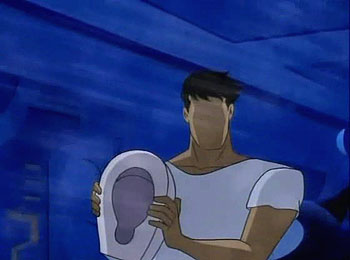 But did he pee in this?

Even The Question gets in on the action with a bedpan. 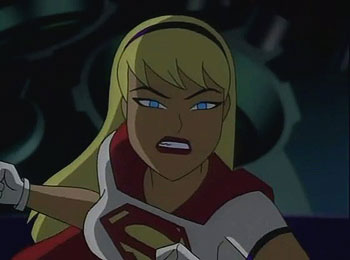 Of course the battle to end all battles occurs in the reactor room with Supergirl trying to stop her own clone Galatea from destroying the Watchtower. This is one brutal fight. This is a major punch-up come alive and animated from the pages of comic books. You wince at each blow. The dialogue here is top notch. “What I’m really hoping… is that you’re dumb enough to try to stop me.” They taunt each other and finally it is Galatea that snaps, finally succumbing to her real desire: To kill Supergirl, the source of her DNA.

Meanwhile, the missing Batman confronts Mrs. Waller and verbally spar, ultimately getting her to look at the another possible source of the cannon fire. “There are three people on this planet who are smart enough to do this. Two of them are on the Watchtower.” Which only meant Lex Luthor. After Batman leaves, she discovers that a lot of Cadmus technology has been transferred to Lexcorp, and they finally realize what Luthor has been up to. Waller scrubs Galatea’s mission, but because of her fury at Supergirl, she refuses. Finally, Kara herself single-handedly defeats Galatea in the battle’s shocking conclusion. “Did someone blow a fuse?” “I’ll say.”

The finale of this episode reveals the true intention of Lex Luthor… or more precisely, the entity behind Luthor’s doings, another classic villain that has been hiding within Luthor since their last encounter.

Great script and line delivery from everyone.

Cadmus was an amazing look into the potential of a superpowered arms race. I was hoping for an escalation into the Cadmus metahumans vs. the Justice League on a larger worldwide scale, which was what was hinted at. But in the revelation of who actually behind the shenanigans, the escalation subsided and focused on a new threat. A bigger threat, but the shift in allegiance by Mrs. Waller and Cadmus disappointed me a teensy bit. Here’s hoping the next episode, the conclusion to this mayhem “Divided We Fall” will bring justice to the story overall.

Another question on my mind is: Why don’t we have a Justice League live action movie already? I strongly believe that such a movie, written, storyboarded and directed by the DCAU team, augmented by a capable FX workshop would be spectacular and a truly epic event.

Bring on the next episode, already.