I have always stated that tabletop role-playing games (RPGs) can be amazing teaching tools, not only for language purposes but to develop critical thinking skills, social skills and general knowledge. Yesterday, I finally ran a game in an English for General Purposes class to see the students could be engaged enough for them to communicate with each other and me without being shy. 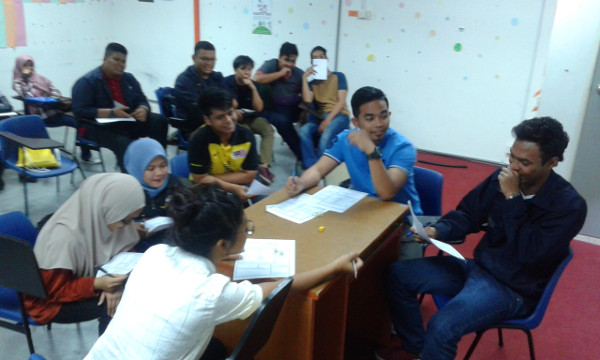 Seeing that polyhedral dice were rare in these here parts, I thought I would run a game that used the ubiquitous six-sided dice. Thus, AntiPaladin Games’ Mini Six was chosen. Besides, the system is based on West End Games’ D6 system which runs the Star Wars RPG which I have been familiar with for the last 26 years.

The previous week the students and I had agreed to participate after briefly explaining to them what the game is, how it would be played and what my intentions were. Six of them volunteered to be Player Characters (PCs) while the rest would be able to observe and give suggestions to them as they played. I would become the gamemaster (GM) and pregenerated characters would be provided to the players.

I thought I would create a setting riffing off The Mist and Silent Hill because I had no idea how familiar the students were with genre tropes. A mystery setting with lethal monsters might provide enough motivation for the players.

I also played the video above that I quickly made with OpenShot Video Editor.

Shadows Through the Mist

Al-Fayed of Oman, Ishikawa of Japan, Martinez of Mexico, Rand of Great Britain, Sarovic of Bosnia and Sikorsky of the United States woke up in a back section of an airliner. Although the six of them knew who they were, they had no memories of boarding a passenger aircraft.

Certainly not one that had been sliced open and missing its entire front half including its wings and cockpit.

Through the hole, the six saw an omnipresent mist and smelt the stench of dead things. Several hundred metres ahead through the mist they could see the obscured shapes of many trees. A forest.

They looked around and saw each other. Sarovic, the engineer, broke the ice. Then they all introduced themselves. They also noticed that they were the only ones there. There were no others, not even corpses.

They scavenged what was left of the cabin (using the Search skill and my random table). Ishikawa the athlete found a torchlight. Al-Fayed the detective found a drinkable water bottle. Martinez the soldier retrieved a knife from the flight attendants’ aft station. Rand the politician discovered a first aid kit from the same station. Sarovic the engineer found a small bag that held a pair of usable walkie talkies.

Sikorsky the scientist however found an automatic pistol, a Glock 19 with a full clip of 15 rounds.

They decided to split up. The men, Ishikawa, Al-Fayed and Martinez thought they would scout the forest ahead. The women, Rand, Sikorsky and Sarovic would stay in the aircraft cabin. 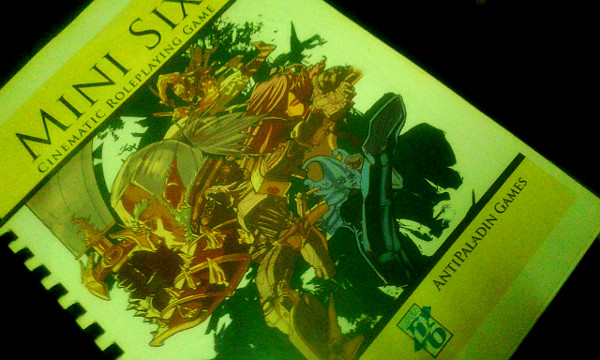 With a lineage that leads all the way back to the Ghostbusters RPG.

Sikorsky studied the aircraft and discovered sign of crash damage, only that the aircraft was cut and placed carefully on the ground with them in it, unconscious.

After the men had left, they heard the sound of something walking on top of the aircraft. Rand went out to scout with one of the walkie talkies and saw something horrific: a rotting human body with no head.

She retreated back into the cabin (with a successful Sneak roll) without drawing attention and regrouped with the others. The trio hid behind the seats. Two of the creatures dropped from above. One wandered away. The other entered the open cabin.

Before it spotted them, Sarovic attacked! She ran toward it and (with a successful Acrobatics roll) slid under it between its legs. (Initiative order: Sarovic, Sikorsky, creature and Rand.) Sarovic jumped and punched it from behind. Her fist went through the rotting flesh, but upon withdrawing her arm the creature was still standing.

It turned to face Sarovic. Then its stomach opened up to reveal a large maw with sharp teeth. So Sikorsky shot it dead centre of mass with her new-found gun. It fell onto the deck, convulsing violently but very much incapacitated.

But where was the other creature.

It was Sarovic’s idea to open up Rand’s first aid kit to find a vial of disinfectant to use as a poison for the creature. They were to lead the thing toward her where she will throw the opened vial into its mouth, hopefully killing it.

Sikorsky and Rand hopped the seats to join Sarovic and they jumped out into the mist outside.

Sarovic and Sikorsky carefully checked out the port side of the aircraft, finally seeing the plane’s tail fin in the mist. Rand crept to the starboard side of the aircraft. The creature was on Rand’s side of the plane. She yelled for the others when it turned and ran towards her. Sarovic, with the vial uncapped, pounced on the creature and threw the disinfectant… which bounced off the creature’s headless shoulder and ofell somewhere out of reach! (Her Throw skill was only 2D!)

Long story short, Sikorsky’s shot went wild and the thing bit her arm with its stomach-maw. Fortunately no blood was drawn, though when drawn back the arm was smeared thick with foul-smelling goo.

But before anything lethal happened (with the expenditure of a Rand’s Hero Point which I allowed) the mist suddenly cleared up and the clouds parted. Sunlight suddenly flooded the area immediately surrounding the aircraft. The thing convulsed in pain! Boils formed and erupted on its skin and belched foul-smelling smoke.

It finally fell over, becoming a burnt-out, smoking husk on the ground. The clouds built up swiftly and sun went away. The mist returned. Everything returned into their shadowy forms.

Rand asked if Sikorsky needed any first aid, but she was not injured by the bite. (Thanks to my very low damage roll, yeesh.)

Then the women turned to the forest and hoped the men survived their excursion. 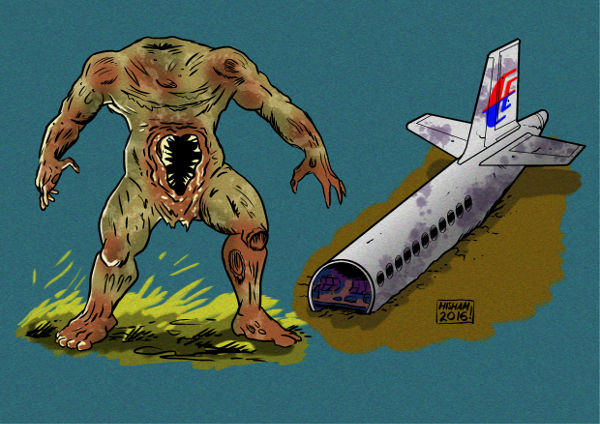 Sorry but I had trouble drawing the mist itself

Ishikawa led the men towards the trees. At least they hoped that those were trees.

As they soldiered on quickly, Ishikawa spotted something ahead which were smaller than trees, but moving in their direction. This allowed the group to hide behind some bushes to wait for the moving things to pass them by.

They saw in horror the same headless dead things staggering past them, unaware of their existence (because everyone succeeded their Stealth rolls). After the creatures had safely passed them by, Martinez thought that he had to stop them from staggering on towards the plane. So (with his Throw skill of 5D) he got up and threw his knife at one of them with all his might. The knife went clean through the torso, spilling ichor onto the ground. The creature screeched and fell. (His Might was 4D, plus 1D for damage for the knife.)

The other two turned and began rushing at Martinez. Martinez asked for Ishikawa’s yet-unused torchlight. After handing it over, Ishikawa and al-Fayed ran towards the treeline and into the forest.

Martinez threw the heavy metal torchlight with all his might, striking a second creature incapacitating it.

The final creature was still rushing towards him. He had nothing else to throw with. So he turned and ran for the forest!

Meanwhile, al-Fayed and Ishikawa raced through the trees. The perceptive al-Fayed told Ishikawa to stop running. He had spotted something ahead. Something that looked metallic. They crouched and planned. Ishikawa decided to sneak close to see.

(With a successful Sneak roll) Ishikawa crept closer and saw that the object al-Fayed had spotted was a military Humvee. Perhaps there was someone inside who could help them! He crouched lower and approached silently. Taking a sneak peek into the driver’s cab, he saw a grotesque scene: half a dozen or so disembodied heads with spider’s legs growing out of them moving about within, scratching on the seats.

He gestured al-Fayed to approach. They both sneaked to the back and considered opening the rear hatch. What if those head spider things were inside? Preparing for the worse, al-Fayed swung the hatch open while Ishikawa prepared to punch the creatures.

But there were none. Instead, there were many cases of M16A4, M4 and HK416 rifles and carbines. Firepower! Finally, something to fight with. Ishikawa asked al-Fayed to help him, but instead he said he will be drinking from his water bottle. He was parched.

Just as Ishikawa was pulling out a case of M16A4s, Martinez burst into the clearing breaking a lot of dead branches on the forest floor. He made a lot of noise.

Suddenly the Humvee rocked violently. Ishikawa jumped out the back with his case, spilling the rifles onto the ground. The head spiders were being agitated by the noise Martinez made. They were rushing and knocking themselves against the windshield. The windshield was cracking!

Just as Ishikawa and al-Fayed grabbed a weapon each and ran for Martinez, the windscreen shattered into a million pieces.

The gruesome human heads smashed their way out of the cabs – their pale dead eyes blinking, its mouth dripping ichor, scrambling on arachnid-like legs – and swarmed viciously and frantically towards them!

To be continued. Maybe. 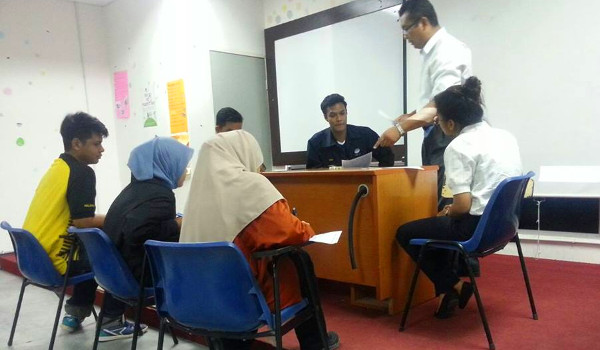 Bonus photo from the students!