Jerry Blakemore came over to the house all the way from Texas to playtest 12 to Midnight‘s new Savage Worlds game Weekend Warriors! (Not really, he was on vacation, and I just happened to be in his path.)

Although I’ve bought the Savage Worlds Explorer Edition from Amazon.com seven thousand years ago, I’ve never had the opportunity to run or play any games with it. So, this was my first time rolling dice for Savage Worlds. 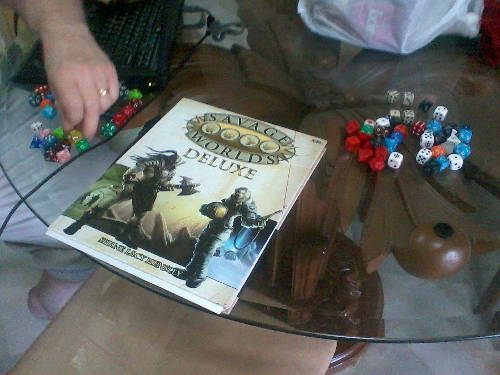 After picking Jerry up at his hotel, we then headed back to Pandan Indah to Irfan’s school extraction. Then, we had lunch at Galaxy Ampang where many different types of nasi goreng died for us. In the meantime, we regaled each other with a myriad of gaming war stories.

And then it’s off to the dinner table at home for some gaming. 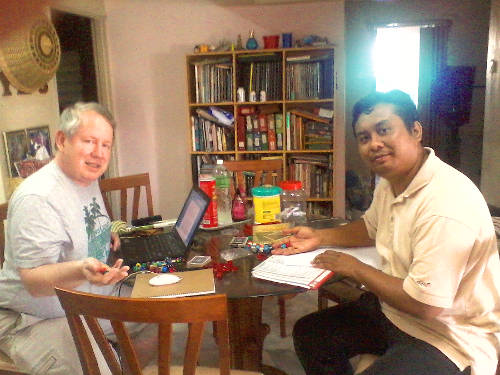 The scenario is titled New Year’s Day. It’s close to midnight on New Year’s Day. Characters are in an US Army battalion attached to Fort Monmouth in New Jersey near the border of New York. The temperature has been dropping and every base personnel has been ordered to be combat ready, for reasons unknown. But the CO has prepared some food and drinks; and a large projector displays the festivites happening live at Times Square in the middle of Manhattan a few miles away.

I play the pregenerated Private First Class Joey Marizo, a new recruit who had just been transferred there and unlike the rest of the battalion had not seen action overseas. Thus, one of his Hindrances is ‘Cruit. However, he has Brawler and Urban Warfare among his Edges. The latter’s bonus of +2 for Notice and Climb in urban areas was a great help. It also helped that PFC Marizo has an M249 SAW with 200 rounds of slugs on him.

Exactly at midnight, we saw explosions tear through Times Square on the projected screen. Everyone was ordered to mobilise for possible terror attack on New York City. The battalion was flown out to Manhattan on UH-60 Black Hawks and were deployed at Bryant Park near the New York Public Library.

The first sign that things were not as they seem was when the battalion was ordered to put on gas masks as they marched in the ice toward Times Square. And for some reason, and the snowstorm was not letting up.

Times Square was a chaotic mess. NYPD and the Fire Department were cleaning up the debris and helping civilians out of wreckage. Ambulances and paramedics were everywhere. There was a family on the sidewalk and a paramedic was trying to revive the father, but it was a lost cause. But despite being dead, the father grabbed the medic and growled savagely as he tried to bite him. The squad pulled the family away and Marizo fired his SAW a few times, exploding the father’s head. Marizo told the boy, “Kid, get a good therapist.”

After the squad got the family to hole up in the store until further notice, Marizo spotted some winged flying things bearing metallic objects under them. They dropped canisters on the street that sprayed out and filled up the air unknown gas. Marizo was thankful to have his gas mask on, but was curious that orders were given to wear them in the first place. Marizo’s SAW tracked and fired at one of the flying things. It fell to the pavement mangled and bloody. The squad discovered that it was a giant humanoid bat creature!

Meanwhile more corpses were rising. The soldiers fired in vain at what appeared to be honest-to-goodness zombies. Even as they fell, more took their place. Then shots were fired at the squad from high on a building across the street. Marizo saw the muzzle flash (thanks to Urban Combat Edge) aimed and fired at it. Wild Die helped get Marizo an Ace and a body fell out of the window and onto the ground on the other side of the shambling undead.

But before they could investigate the team received immediate orders via radio to drop everything, retreat to Bellevue Hospital. Marizo hoped that the family would be able to hold out in the convenience store.

There was a long line of ambulances heading to the emergency entrance of Bellevue. The line was not moving at all. The squad was ordered to inspect at each vehicle for signs of terrorists. As Marizo and the combat medic PFC Charlie Leung (I keep calling him “Chang” somehow) approach one, the drivers began arguing. The ambulance was then torn apart by what might have been a shaped charge. The explosive energy rushed out the back of the ambulance and cracked open the school bus behind it. Marizo and Chang – I meant Charlie Leung – successfully ducked behind another vehicle as fiery debris rained down with the snow.

The bus driver was dead, but he came rushing out of the bus growling anyway. Marizo and Chang – I meant Charlie Leung – fired, dropping the zombie. More undead bus passengers were shambling out. Screams of those still alive could be heard. Everyone came rushing to their aid. At first, they set up a line and shot at everything undead that stumbled out of the bus, arms outstretched to grab a living person.

Then Marizo and Chang – I meant Charlie Leung – ran forward to the front of the bus to attract the zombies’ attention while their squadmates picked off approaching bad guys. B squad circled out back and covered Sergeant Smith while he pulled survivors out of the burning bus. Marizo’s shining moment was when he used autofire and brought down three zombies in a single burst.

After Smith cleared out six survivors (there were more when he began, but six was all that was left in the end), he called, “Fire in the hole!” and threw a couple of grenades into the bus after Marizo bugged out. Explosions bloomed, and then there were no more zombies. 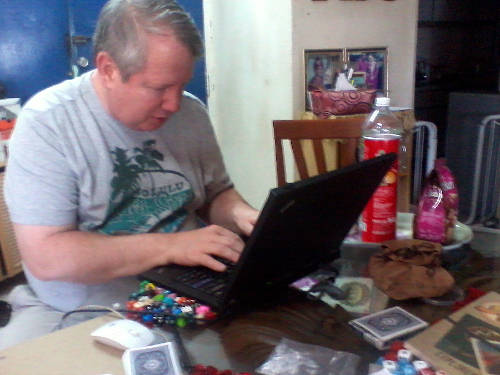 GM going through his notes

But before they could do anything else, both squads were ordered by radio to retreat back to Bryant Park to wait for airlift. Upon arriving and setting up a perimeter around the LZ, the Black Hawk swooped in to land. One of the soldiers from the other squad, tired of the cold, broke ranks and ran for the helicopter. That was when a rocket screamed out from nowhere and blew the Black Hawk up, also killing the soldier.

The rocket came from someone by a car parked by 42nd street. Both squads ran toward the unknown assailant. Marizo dropped on one knee and fired, killing the attacker from a distance. Smith and the others inspected the dead terrorist and found no identification on him. He reported the destruction of their helicopter and then received orders to go to the Javits Convention Centre.

The group stopped at the VA Hospital to ask for directions because it was turning into a massive blizzard. It was getting colder. En route, they saw huge snowdrifts had formed.

It was then that something exploded out of a huge snowdrift and attacked. It was a yeti! No wait, two! Marizo was firing his SAW at them when it was time to pick up Ain at the train station and stop the game.

And so it was time to say farewell to Jerry. We hope the next time you come to Kuala Lumpur, we’ll be able to game more – and with more people!

Savage Worlds was great and works exactly as it was advertised. Fast! Furious! Fun! I was able to roll for the entire squad during the bus battle without feeling bogged down. Initiative was simpler than I imagined with the GM drawing cards and assigning initiative slots. And huzzah for drawing Jokers.

The setting was wild. I went in cold (in more ways than one) and was not privy to what threats existed, so the sudden appearance of zombies and Man-Bat-type critters surprised the heck out of me. Also, being the lone cruit, I had no say in leaving civilians behind. Jerry explained later that the setting’s big bad created the threats after being arriving from somewhere. And pop-culture monsters appeared, well… because the big bads studied pop culture monsters.

The threat also affected the mind of some people in the government from the police to the federal government. For example, NYPD, according to Jerry, had seen Marizo’s squad shoot down civilians instead of zombies which would be a point of conflict later if we continued playing.

Watch for Weekend Warriors published by 12 to Midnight, when it’s time for its release!