Phaser to a Singularity Fight

This Sunday afternoon, I thought we would just test out Star Trek Adventures. I did not even prepare a scenario. I started with the first encounter and it just snowballed onward from there.

And yes, I just saw “The Enemy” several days earlier.

Commander Lenaris Los, a Bajoran and an executive officer of Starfleet. (We never did decide which starship he was an XO of.) 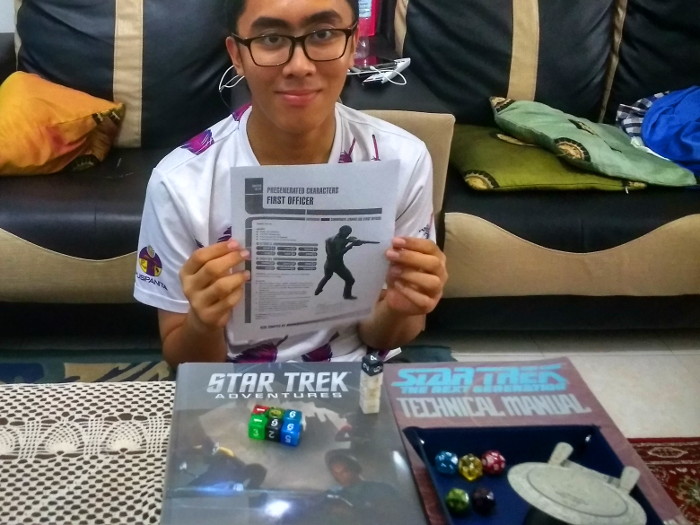 Irfan is now a Bajoran

Commander Lenaris was in the midst of investigating the tunnels of a deserted asteroid station when he came upon a locked door. (Rolling Control+Engineering,) the good commander was able to unlock the door. It whooshed open, revealing something unexpected within: a Romulan Centurion – pointed ears and all.

The startled Centurion went for the disruptor pistol on his belt, but (with a successful Daring+Security while securing a couple of Momentum for later used) Lenaris was able to knock the weapon out of his hands. 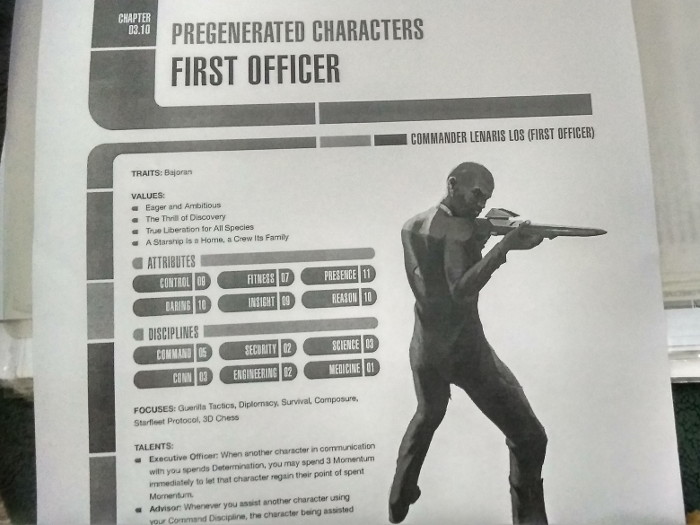 Before the brawl could continue, the Romulan raised his hands. “Stop!” he said. “Listen to me. We have to get out of this station. I was investigating the technology used by this place. There is an artificial singularity at the centre of this place. It is out of control and will devour this entire asteroid soon.”

Commander Lenaris mulled over this for a second, then lowered his fists. He said, “Alright, let’s go.”

That was when a bone-shattering asteroid-wide crack echoed throughout the asteroid station. Everything shuddered. The roof collapsed and caved in, thanks to the artificial gravity field. Commander Lenaris tried to evade the falling rocks (by rolling a Fitness+Security check) but failed. (I rolled 3 damage dice, where Lenaris received 4 Stresses and an Effect.) Lenaris fell, and was pinned down by rocks. The Romulan however was unscathed by the cave in (thanks to a successful Insight+Security check). 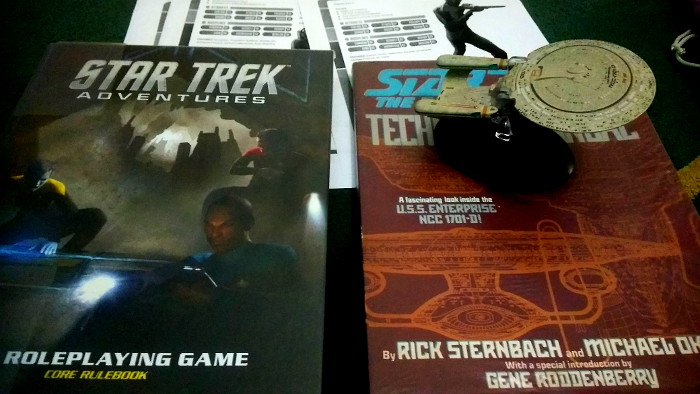 The Romulan thought of fleeing the scene, leaving Commander Lenaris to die. Lenaris pleaded to the Romulan, “Please, you have to help me.” (Irfan did not say anything that with an incentive for the Romulan to stay, so I gave him a Difficulty or 3 instead of a 2. He spent a momentum, then he rolled the dice.)

Immediately, the Romulan lifting up the rocks giving Lenaris the opportunity to crawl out and away from the debris. He was hurt, but mobile. The Bajoran said to the Romulan, “Thanks. Now, let’s go.” 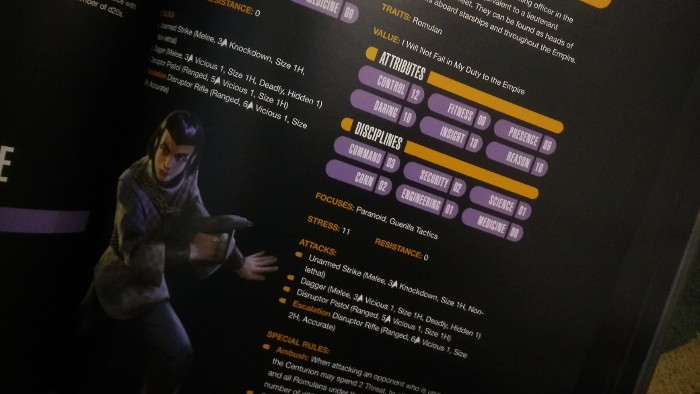 Commander Lenaris and the Romulan Centurion headed down the shuddering corridors of the empty asteroid station to get to the hangar bay, where his  Federation Type 7 shuttlecraft was parked.

They reached the hangar bay doors, but it was jammed. Lenaris quickly hotwired the circuitry behind the walls, causing the doors to slide open! The corridor opened up into a larger sized room. Lenaris’ shuttlecraft Einstein was parked on the deck. Five other shuttlecraft parking decks were empty. On the far side of the hangar bay was a forcefield opening which prevented air from passing through but allowed ships to enter or leave.

There was another violent tremor and the corridor behind them twisted and disappeared into a cloud of dust. Commander Lenaris was able to pull himself in through the door, but the Centurion was not able to hang on. Lenaris grabbed on to him. As the Romulan was trying to balance himself which would allow Lenaris to easily pull him into the hangar bay. But (because the Romulan not only failed his Fitness+Security roll but he also rolled a 20, a Complication) the savage winds blew debris back towards where they came from. A debris struck the Romulan’s forehead, knocking him out. 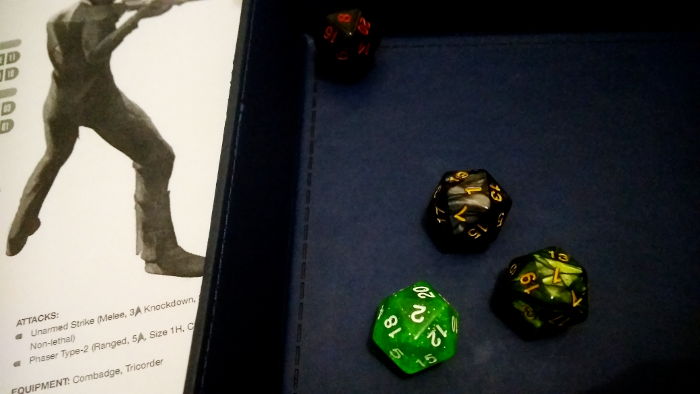 Now Commander Lenaris had to exert himself to pull his ally as the Romulan could not physically aid him in this. (Irfan’s Difficulty was 3 instead of 2. He spent two Momentum and rolled 4d20 instead of 2d20. The results were photographed above. Yes, two “ones”, each provided him with two Successes.)

The Bajoran heaved and with his strong physique, he pulled the Romulan through the door threshold. Before Commander Lenaris shut the door, he saw that the debris and the dust cloud were part of the asteroid they were on. The asteroid was crumbling into pieces and being pulled into the gravity well of the artificial singularity that the Romulan spoke of.

Commander Lenaris quickly carried the Romulan into the Einstein and jumped into the pilot seat. He swiftly flew the small craft out of the hangar bay just as the hangar bay started to collapse. The Einstein was flying through a thick cloud of dust and gases. Pieces of debris in space were also being pulled towards the collapsing asteroid.

A sizeable metallic rock appeared out of the dust cloud in the Einstein‘s flight path. Lenaris (upon successfully rolling a Daring+Conn check with a couple of Momentum – Difficulty 2) just managed to avoid being pulverised by it. Before long, the Einstein had broken through the thick cloud of dust.

He pointed a sensor rearwards and the screen a fast receding scene. The asteroid was but a cloud of dust getting smaller and smaller behind them until – after a bring blue flash – disappeared into absolute darkness but for the million of bejewelled stars.

Was the artificial singularity still there, but invisible?

All he knew was that he best be away from this star system.