Last time on Star Trek Adventures: Thine Own Self…

While looking for the missing New Orleans-class USS Nairobi in the Melpomene Sector near the Typhon Expanse, the Saber-class USS Sienkiewicz (NCC-88034) dispatched an away team on the Danube-class runabout USS Moonstar. During their away mission on Delta Melpomene V, they encountered time crystals. They showed them a possible future where the Sienkiewicz was in flames, the captain appeared dead and an old Einstein-class starship was attacking them.

Soon they rescued Lt. Cmdr. Mungar whose repair crew & runabout USS Segura was wiped out by a gargantuan invisible tentacle of metreon radiation and exotic matter that reached out from the Great Mugato Nebula. Meanwhile, the Sienkiewicz had also vanished and gone incommunicado.

The Moonstar crew entered the starcave with an internal diameter of five light years where their pilot Ensign Sparik was incapacitated by an external psionic attack. They had to create anti-psi helmets to prevent the telepathic attacks. Meanwhile. there were dozens of derelict starship clustered together within the cave… 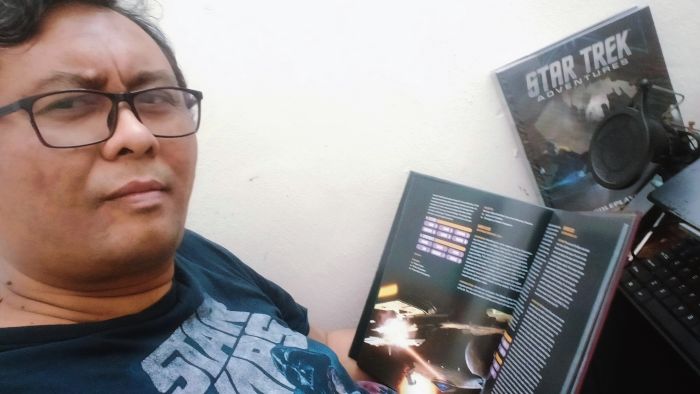 The GM pulling some nonsense

Sometimes Things Get, Whatever

The Moonstar limped deeper into the starcave, past the graveyard of starships, from many time periods.

“Look at this place,” Lt. Tamat commented in awe. “Is that a Crossfield?” The Crossfield-class starship had been discontinued by Starfleet in the mid-2200s.  Lt. J.G. Cañete, at the tactical console, said, “It looks like there’s a huge hole in its saucer section and its missing its port nacelle.” His panel beeped.

Mungar acknowledged, “Copy. Heading there.” Two kilometres ahead was an old Saladin-class starship the USS Adriatic (NCC-588). Tamat exclaimed, “A Saladin! Let’s get whomever is in there out!”

Cañete reported, “Life support is dead aboard the ship, except for their Transporter Room 2. There’s a breathable nitrogen-oxygen atmosphere in there.” 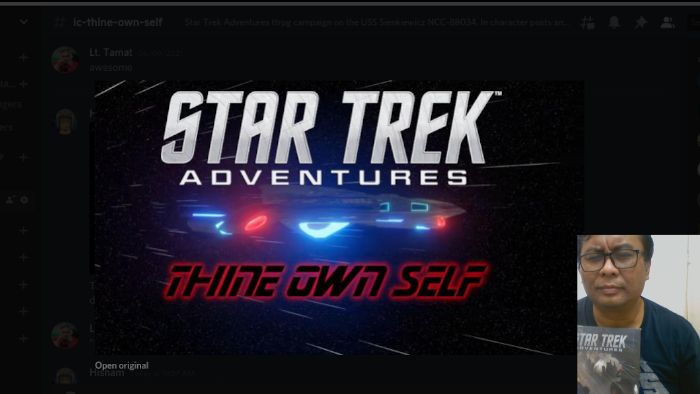 “Let’s take pattern enhancers and go explore, see if someone needs saving?” said the Cardassian. “Simon, you’re with me. Mungar, you hold down the fort.” Ensuring their anti-psi helmets were working, the duo transported over to the Adriatic.

Tamat and Cañete materialised in Transporter Room 2. (At this point, I asked Tamat to roll his Reason+Engineering, Difficulty 2, to determine how well he constructed the anti-psi helmets. He got 2 Successes.)

Transporter Room 2 formed around Tamat and Cañete. When the beam ceased, they saw a pregnant Human woman in a blue Science division tunic from the mid 23rd century – a maternity uniform variant – on the floor lying in front of you. She was apparently going into labour and was in pain. She pleaded in agony, “HELP ME! PLEASE!”

“We’re here to help, ma’am!” Tamat said, as he knelt beside her. “I am Lieutenant Tamat, USS Sienkiewicz.”

Suddenly the lights on both their anti-psi helmet flashed, blinking even brighter. Tamat saw the woman fade into nothingness for a second, then reappear. “AH!” she cried. Again, she blinked out of existence and returned several more times. Finally, she implores, “You have to save my baby!”

They tried to quickly establish the transport pattern enhancers as the science officer blinked in and out of existence at random times. Tamat believed that it was some sort of temporal distortion. The officer said, “There should be fifty more survivors aboard. You have to help them!”

Suddenly there was a loud BANG at the door. Something was attempting to smash it in.  The science officer cried, “They’re here. Oh, my God. They found me.” Who’s they? The crew? 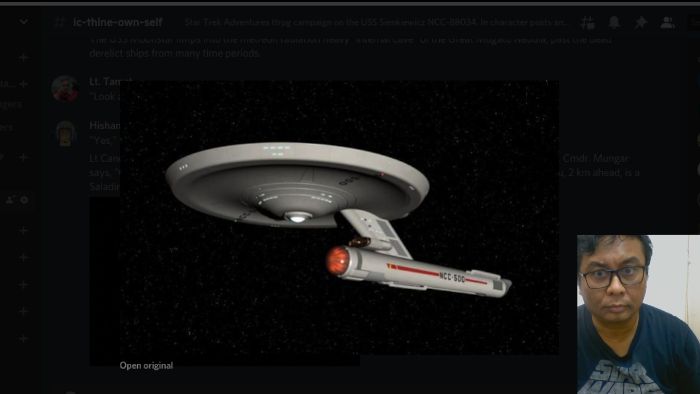 Another BANG and the door had a visible impact damage, bent inwards into the transporter room as if something had struck it with a metallic tool from outside. “Oh no,” whispered Tamat, drawing his phaser pistol. “They’ve succumbed to the telepathic threat.”

“Tamat to Moonstar, we have a survivor to beam out! Energise!” Mungar’s transporter beam whisked away the science officer into nothingness.

The door broke into pieces. They heard sounds of mechanical whirring through the darkness outside. Then half a dozen laser beams lanced into the room trying to scan everything within.

“Let me see if I can link the transporter here to ours.”

Tamat jumped behind the console of the antique transporter room, and tries to initiate a linkup with the Moonstar.  Then his anti-psi helmet flared up again. For about 3 seconds, he saw that the door was not broken. There was no danger. There were emergency lights BUT the transporter console was lit up like a Christmas tree for reasons unknown.

Then the helmets quieted down and the doors were back on the floor in pieces. A Borg entered the room. A second later two more Borgs strode in. Tamat exclaimed, “BORG!” 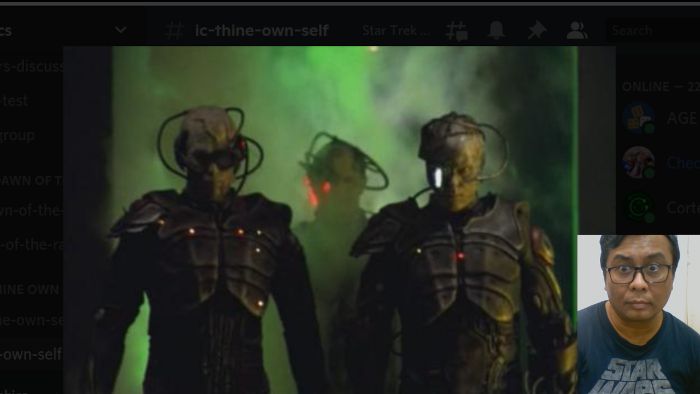 Tamat was unable to activate the transporter (a Daring+Engineering failure) and hit his comm badge. “I can’t make it work! Mungar, try boosting the signal from there!”

But Mungar’s voice was a hodgepodge of panic and anger and despair. “THE WOMAN! No! Sir. I can’t— NOOOO! Lt. Tamat! Help!” — then the helmets flashed again — and they heard, “… are you talking about sir? There’s no woman? There’s no Borg. The corridors outside are exposed to vacuum. I think you’re being” — the helmets ceased flashing — “…Lt. TAMAT! MAYDAY! She’s somehow overloaded the warp core. 20 seconds before the Moonstar explodes!”

Some Kind of Blue

Meanwhile, Cañete aimed and fired at the lead Borg (Daring+Security, 2 Successes) who then burst into a cloud of flaming… vine fragments and leaves?

Tamat was flummoxed. “I am not sure what’s going on!” He too fired but missed, but the phaser strike produced a fiery burst of leaves and vines along the far wall.

Then their helmets flashed again and they suddenly heard Mungar’s calmed voice from their comm badges, “You’re under telepathic attack, sir. You need to tune up your helmets!”

Tamat accessed Cañete’s helmet via his tricorder and tried to figure out the right move. (Insight+Science, Success!) Suddenly, the Borg vanished. The door was untouched. The far was a thick miasma of vine and leaves that grew out of a planter. It must have grew untended here for over a century. They had gouged the vines with their phasers during their “battle” with the Borg. The air was thick with wood smoke.

“What are these plants?” wondered Tamat. But he would never know what they were. (Insight+Science, Failure.)

Cañete studied the transporter console and said, “Sir, the transporter controls. It’s been set to a feedback loop. Drawing power from secondary EPS conduits. The warp core might be down, but it’s using the emergency fusion generators.” He looked up at Tamat in shock. “The transport buffer is at 99.6% full, sir.” 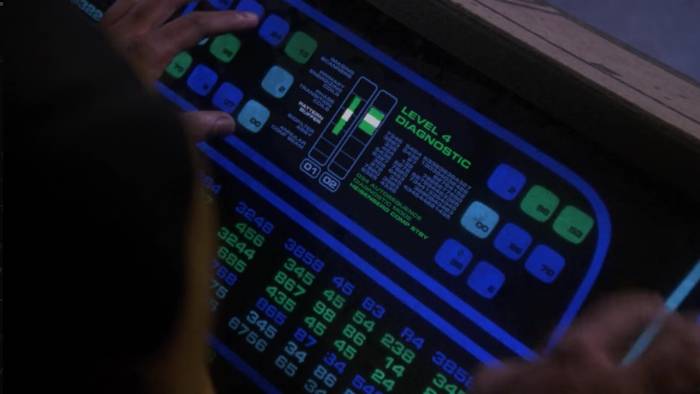 A relic of a console

“A stored pattern in the transporter buffer?”

“Captain Montgomery Scott did this once,” pondered Tamat. Knowing that fact, Tamat tried pressing some more buttons. (An Insight+Engineering roll, with a focus on Transporter. Almost failed, but for the assist from the Adriatic‘s Computer+Engineering herself.) With the console’s ergonomic and customised UI design, Tamat finally figured out in the last moment what was needed. He then pushed up the three sliding controls.

Someone in a gold 2260s Starfleet uniform with Lieutenant’s stripes materialised, someone from “Those Old Scientists” era. He was a slim and confident young Human, his head capped with a glorious mane of long hair.

“Hello, I am Lt. Tamat, and this is Lt. Cañete, USS Sienkiewicz.”

“Not quite, Lieutenant. You’ve been in the transporter for some time. Let’s get to our ship and catch you up. Mungar, can you transport us and our guest out?”

Cañete, investigating an incessant alarm on the condole, said, “That last transporter materialisation has almost completely exhausted the ship’s backup energy reserves. The anti-matter tanks’ forcefield is about to collapse. This ship’s gonna blow in about 10 seconds!”

Mungar transported them back to the Moonstar immediately. (He needed 2 Successes in Control + Engineering (11+2=13) and spent a Determination point on his “A ship could be an extension of your mind and body” Value for one d20 to get one automatic Success. He got another Success in the dice roll.) 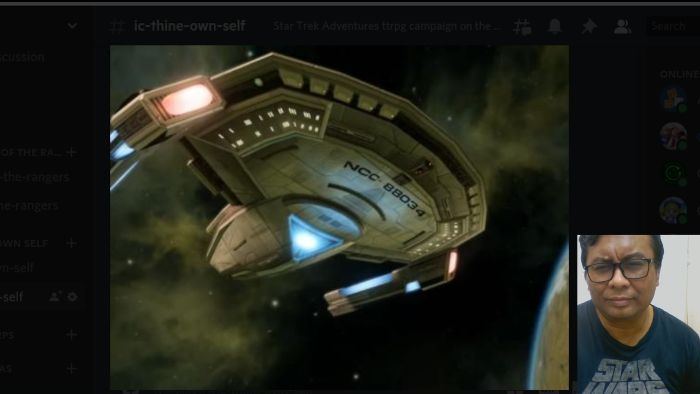 Finally, to the USS Sienkiewicz

Barclay looked around the interior of the runabout. Amazed, he said, “The technology on this ship… isn’t like anything I’ve ever seen!”

“Let’s get you something to drink, Mr. Barclay. Tea?” asked Tamat.

Cañete reminded them, “We have to get out of here. The Adriatic is about to blow!”

Barclay dropped into the navigation station beside Mungar’s conn station. They both piloted the Moonstar away from the Adriatic as fast as the impulse engines could afford it. There was a flash and the Adriatic explodes. An adjacent Klingon K’t’inga-class cruiser and a Romulan D’deridex-class warbird were vaporised by the anti-matter explosion. The combined blast ripped a First Federation Fesarius-type globe ship in two, disintegrating one half. The second half became a torrent of hazardous fiery debris that spread out at high velocity towards the Moonstar.

Barclay and Mungar piloted the Moonstar, manoeuvring left and right as fiery debris streaked past them, swiftly cleared the blast zone. Cañete raised shields, but the debris barely touched them. Soon the carnage caused by the exploding Adriatic was over.

Mungar turned to Tamat and said, “Now we can drink tea!”

So There I Was

“That was close. Lieutenant, there’s no easy way to say this, but… welcome to the 24th Century,” Tamat says, giving Barclay the coffee he ordered from the flight deck’s food replicator.

“24th, huh?” Barclay said. “Well, that tracks with the advanced technology on this ship and the fact I’m honestly not sure what species you are, Lieutenant.”

“I’m a Cardassian,” Tamat said.  “Not much contact between us and the Federation back then.”

“We left Starbase Earhart in 2266 on a six month patrol,” Barclay sighed. He informed them that the Adriatic was caught in a rift in spacetime and found themselves near this nebula. They investigated and discovered that something in the nebula generated illusions that compelled the crew perform acts. There were other ships adrift then, but not as much as there were now. He mused, “The illusions seemed to force the crew do really strenuous but exciting physical activities, like fight for their lives, save a comrade from being killed, almost as if each were an exciting scene from a some action holomovie.”

“Oh,” said Tamat. “I should get you a helmet. These protect us from the telepathic attacks.” Tamat replicated a new helmet, complete with revolving lights and Barclay’s stencilled name.

“Oh, this is the stupidest thing I’ve ever seen,” Barclay said, and then readily put the helmet on and fastening the chin straps.

Before long Cañete gestured to the forward viewscreen. They were approaching their missing starship. It seemed to be powered up, but adrift beside a number of other vessels including the USS Nairobi and what seemed to be an Einstein-class starship from the 23rd century. 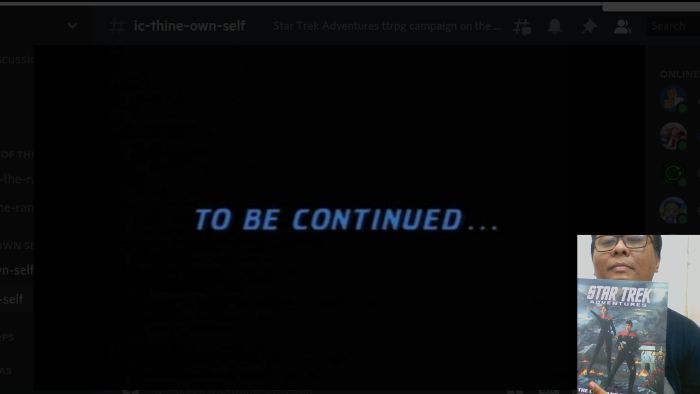