Elsewhere: as Lt. Kodar Tamat, Lt. JG Simon Cañete and Ensign Sparik rushed back from Delta Melpomene V aboard the runabout USS Moonstar to rendezvous with their ship the USS Sienkiewicz at New Inverness…

The Danube-class runabout the USS Segura had been recently dispatched from Starbase 222 to the colony of New Inverness, orbiting the gas giant Balateen in the Melpomene Sector. Communication out of the Melpomene Sector had been intermittent and they were tasked with repairing a  subspace comms satellite which might have been struck by micrometeorites in the wake of a passing comet two weeks earlier. The satellite orbited Balateen and was the only link between New Inverness and the United Federation of Planets.

Commanding the mission was Commander Kavitha Rajakumar, a human who grew up on Alpha Centauri. The Engineer who would repair the satellite was Lt. Ekwueme Marwan, a human from North Africa. Piloting the Segura was Lt. Cmdr. Jora Mungar, a joined Trill.

The Segura dropped out of warp. The enormous gas giant Balateen filled most of  the viewscreen. The surrounding star field was splashed with the red-green hues of the nearby Great Mugato Nebula, a wisp of gas 26 light years across that had split off from the Typhon Expanse in a neighbouring sector hundreds of millennia ago.

The ship’s sensors easily detected the moon of New Inverness, 20,000 km away and Commander Rajakumar ordered Mungar to head toward it. 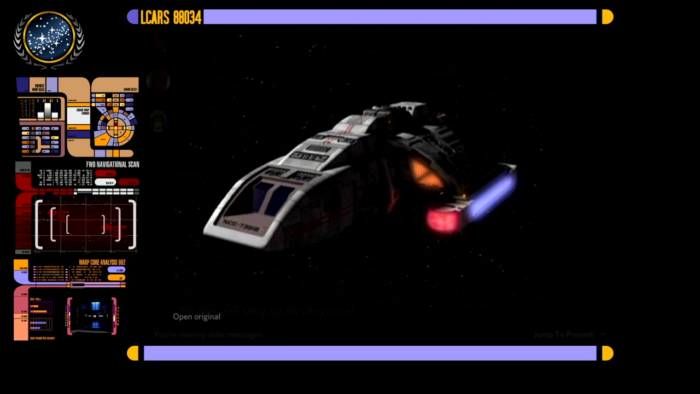 They were 10,000 kilometres away from the satellite when the comms started crackling, heavy with interference, “… unable to contact… repeat… danger …. Inverness calling… exotic matter… -roach with caution- repeat…”

“Exotic matter what?” Rajakumar said, puzzled. She ordered, “Lt. Marwan, use the long range sensors to help out Commander Mungar out.”

He helped, and it worked (with three Successes on Control+Engineering). The comms became much clearer. They heard a more distressing message”… there is a trail of exotic matter particles along your course. Use high energy tetryon scanner to see it! Caution. the particles will smash through the shields and hull like ball-bearings! Repeat…”

The console beeped. The nav screen display a mass of unknown exotic matter which was invisible to the eye and regular sensors. The structure was enormous; gargantuan, even, that the ship was unable to detect where it came from or where it ended. Even worse, the Segura was too close and too fast. There was no way to fly around it.

However, Mungar noticed that the invisible structure had a network of tunnels through it. Rajakumar said, “It’s almost like Swiss cheese.” With Marwan’s help, the sensors mapped a route through the empty corridor within the mass of unidentifiable exotic particles. 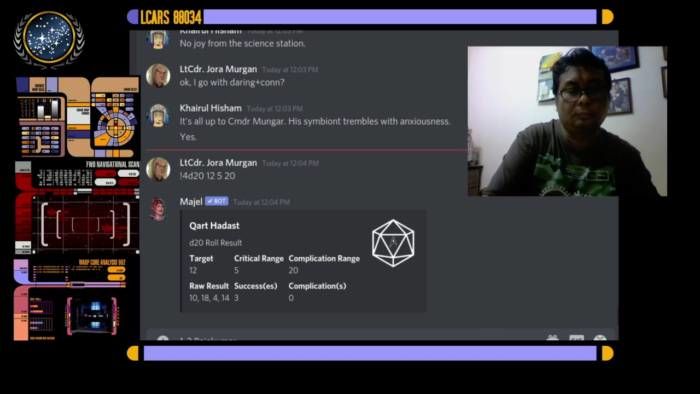 EVERYBODY MAKES IT THROUGH

The Segura turned to a new course, heading 067 mark 35 through the corridor opening in the invisible barrier. It arced to the starboard and upwards, then downwards and slightly to port.

Using the sensor readout, Mungar was able to fly the ship through the passage safely (with Insight+Conn, spending a Determination for a Perfect Opportunity, assisted by Marwan’s  Daring+Science). Cmdr Rajakumar breaths a sigh of relief. “Nice work, but we’re not out of it yet. Use the science station, Marwan. Help scan for a better route through this Swiss cheese!” (At this point we were joined by Mario who took over Marwan as a player character.)

Immediately the display indicated that the invisible passage was turning hard to starboard yet again. With the ship’s enhanced forward scanning, Mungar was able to traverse the hard turn, performing flying skills that prevented them from crashing with the invisible tunnel walls (achieving three Successes with another Insight+Conn roll, purchasing 2 more d20s with 3 Momentum to roll 4d20s altogether, assisted by the ship’s Conn+Sensors).

They were almost through when the tunnel was detected to swerve ninety degrees downwards relative to the Balateen satellite system’s ecliptic plane. Rajakumar interjected, “Oh no! Jora?” 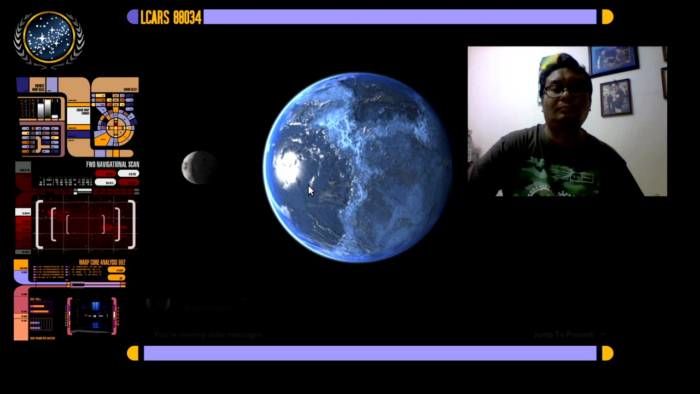 Marwan muttered, “We must try! We can’t go back now.” Mungar was optimistic and said, “I got it, Commander.” (Mungar needed to roll four Successes to fly safely, but got only three with his Daring+Conn roll and Helm Operations Focus. Even Marwan’s Daring+Science 1d20 assist failed! He spent a Determination to activate Moment of Inspiration to reroll. Miraculously, the results of the second roll was five Successes!)

In an inspired moment of flying, Mungar rolled the ship and dropped nose down in relation to the Segura‘s previous attitude. After a bout of lateral g stresses that took forever, the sensors indicated that the exotic matter structure was behind them. New Inverness and its moon greeted them with a blue glow.

There was a comm signal on speakers: “Starfleet runabout! This is New Inverness Control! That was some crazy flying!”

Lt. Cmdr. Mungar breathed a reply in relief, “Thanks!”

“I’m glad you’re okay,” the controller said. “The subspace comm array should be visible from where you are.”

Commander Rajakumar smiled. She said, “Okay, Mr. Mungar. Take us to the comm array, nice and neat, so Mr. Marwan can repair it.” Twice the size of the Segura, the long range subspace comm array was in synchronous orbit between New Inverness and its submoon.

As they approached, Mungar scanned it (getting two Successes from a Reason+Science roll), and discovered that the array was emitting a peculiar radiation. Mungar reported, “Commander, this data is quite strange. The array is giving off the energy signature of the exotic matter structure we just went through. Something might be causing it, we should scan all around just in case there is something cloaked.”

“They did report that it was hit by meteorites from a passing comet,” Rajakumar said. “Maybe the comet created the massive exotic matter trail we encountered?” The scans were negative, but it detected a single large impact hole that a human can crawl into on the tritanium hull of the comm array.

“Maybe I’ll stay aboard?” Marwan said slowly, gesturing at the hole in the array. “I am somewhat claustrophobic.”

“You’re the one who has to repair the array, Lieutenant,” Rajakumar muttered. 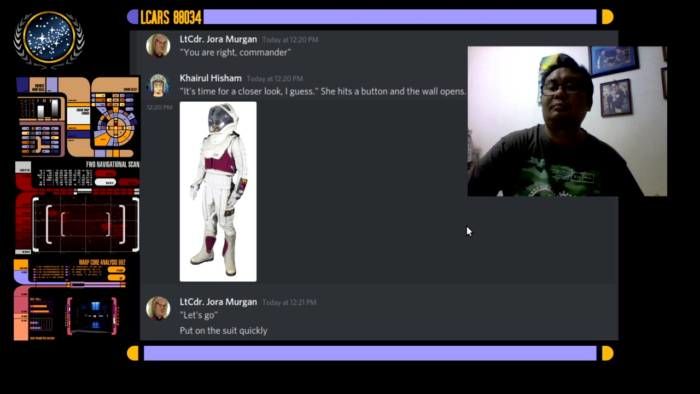 Let’s go for a walk outside

WHAT IS AND WHAT SHOULD NEVER BE

Mungar sidled the Segura up beside the tall, cylindrical array while Rajakumar and Marwan suited up in their EV suits. The Trill tapped on the Marwan’s shoulder and said, “Don’t worry, mate.”

Five minutes later, Marwan and Rajakumar departed the airlock and fired the suit thrusters toward the satellite. Marwan pulled up the array technical blueprints on his tricorder and said, “I think we should check the power source first. See if it was altered somehow.” (One Success on a Reason+Engineering roll.)

But after twenty minutes of replacing burned out EPS relays, they were still unable to restore power to the array. Rajakumar sighed, “This is worse than that time I had a family picnic on Tellar.” Meanwhile, Mungar continued to scan the area. (Although he failed his roll with the Segura providing zero Successes on Sensors+Science, he activated his Technical Expertise Talent to reroll his Reason+Science and got one Success!)

That was when the tetryon scans began beeping loudly.

At the hit of a button, the screen panned aft and zoomed back toward the direction where you had approached from. As the other two were busy with the subspace comm array, Mungar was the only one who saw the LCARS display showing a false colour image. It was part of the exotic matter particle corridor that they flew through. It seems to be undulating, like a living thing.

Suddenly the screen showed that it had extended a gargantuan tentacle that was headed for the array. It must have been several thousand kilometres in length and tapered to approximately a hundred meters at its tip. Mungar sent the feed to his crewmates 20 metres away still tending to the communications device. Marwan gasped at the giant pseudopod, “Holy pulsars! What is that?” 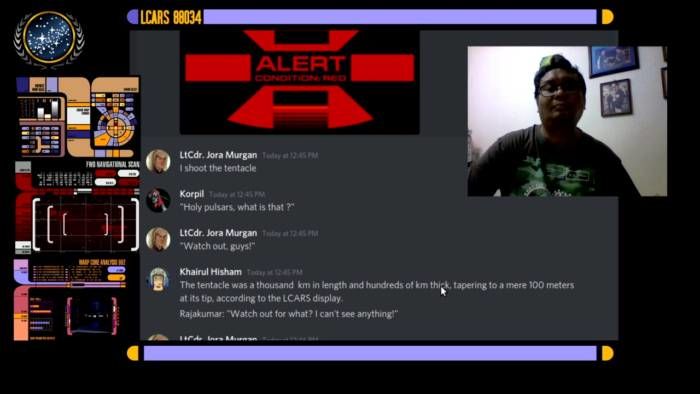 “Watch out, guys!” Mungar yelled into the comm channel. Red Alert klaxons began to sound. Rajakumar yelled back, “Watch out for what? I can’t see anything!”

“Commander, there is a tentacle!” The Trill tried to lock on to the huge, easy target and fired the Segura‘s phasers. The phased energy rectification beam hit nothing, as if the tentacle opened up a hole through itself to allow its passing.

Rajakumar and Marwan drew their phaser pistols and fired uselessly into the void as Mungar spoked into comm channel, “Come on board, guys!” But it was too late.

Something incredible huge struck them. The comm array disintegrated into a cloud of debris, which emitted a burst of radiation that disabled all systems in the runabout and the EV suits. It sent Rajakumar and Marwan tumbling into space. The Segura with Mungar aboard went spinning at high speed towards Balateen. (Both the EV officers rolled Fitness+Security.  Rajakumar only achieved one Success out of the required two while Marwan rolled two Successes.)

Aboard the ship, Mungar – fighting the g stresses once again – saw Rajakumar disappear from the sensor display. Marwan was unable to autostabilise his EV suit’s attitude and he spun further away from the runabout and Balateen. 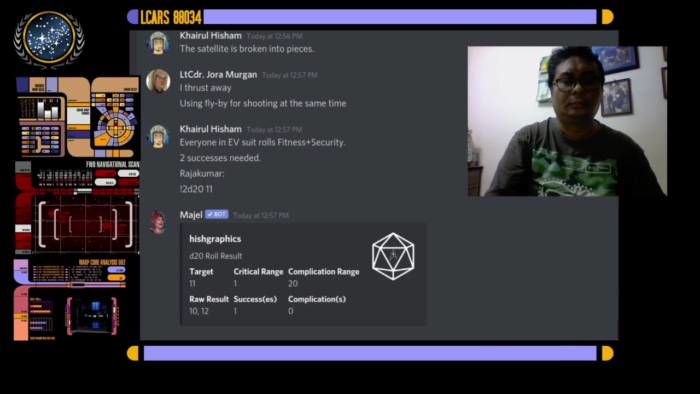 Rolling for their lives

As everything spun uncontrollably, Mungar waited for another attack, but it none came. He began to feel nauseous as the Segura‘s inertial dampeners failed.

No power. No control. An invisible beast in space.

Was this the end for the crew of the runabout Segura? 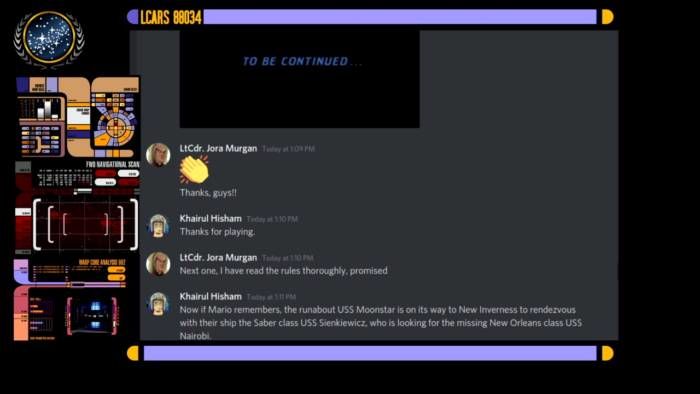 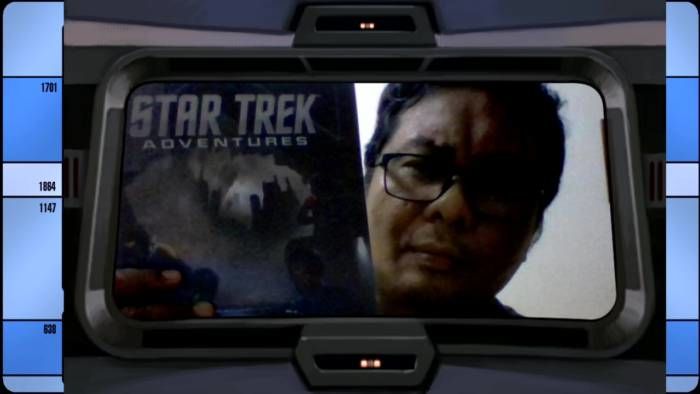 The GM with book