Once upon a time, Shanna Toarinar the bounty hunter stole a captured A-Wing Fighter from the Empire. Soon after, she was recruited to be the first member of the Strikeforce Enteague. Thus begins the Star Wars RPG campaign – using West End Games’s D6 system – that lasted for 10 years in real time as well as game time.

Today Lucasfilm released a cast photo of their new Star Wars film: Strikeforce Enteague the Movie*. With Felicity Jones as Shanna Toarinar, Diego Luna as Ace Browning Crossfire and Donnie Yen as Ben-One-Howel. Download the Worlds of the Enteague Sector D6 pdf supplement that I made here! 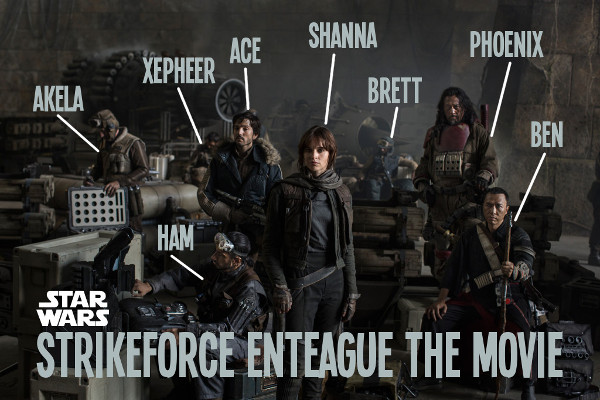 (Just in case this needs to be said: Yes, that is a promotional photo from Rogue One with names of characters from my own RPG campaign. No, there is no and will never be a Strikeforce Enteague film. Probably. Maybe.)