Contacts in the Dark Episode 3

Dangers of the Wastes

Previously, during the mission to intercept critical information from being transmitted by an Imperial Ubiqtorate encampment on Tatooine, Mark Grog the bounty hunter, Steven Waverider the outlaw and Roland Ritcher the gambler meet up with Drew Greyhelm the rebel commando. They all rendezvous with their contact named “Wormie” on Taboon, after which they travel to Tatooine. There, they discover that the encampment is located in the Jundland Wastes…

Contacts in the Dark title

After their run-in with the Devaronian scoundrel named Labria, Mark, Roland, Steven, Drew and Wormie procure transport for their desert excursion from Unut Poll the Arcona manager of the Spaceport Speeders. After a short time, Drew and the trio rent a SoroSuub XP-291 Skimmer while Wormie rents a rusty Incom T-16 Skyhopper because he claims that, “It reminds me of Beggars Canyon back home.”

All psyched up and rowdy for their journey, they drive out to the edge of town, however four sandtroopers block their way. Steven, driving the Skimmer, plows into the Imperial troops without knowing slowing down. Meanwhile, in his Skyhopper, Wormie paces them from a higher altitude.

Together, they head towards the location that they coaxed out of Labria.

Upon reaching the rocky arroyos of the Jundland Wastes, a herd of unmoving banthas block their path. Steven honked the speeder’s horn once, sending the large furred beasts of burden scampering away in a cloud of dust.

Just after, from 200 meters above them Wormie catches a glimpse of a huge mass of dark clouds quickly approaching them.

“Skyhopper to Skimmer,” said Wormie on the comlink. “We have a sandstorm coming for us at flank speed. We have to find shelter or we’re dead. I’m coming down.” Its landing gears extended, the tri-winged airspeeder swoops down to land. All of a sudden, the blue sky becomes dark and the wind grows stronger. They regroup with barely a minute before the storm arrives. Immediately, sand particles begin to sting at their faces. Everyone scans the canyon for shelter and Wormie spots a near-imperceptible crawl tunnel at the base of the canyon.

The rebels make their way towards it and shove themselves into the hole just before the storm front hits with violent intensity.

Rats in the Walls

The tunnel leads to a ledge on the side of a dark stalactite-filled cavern, so the rebels turned on their glow rods. A natural stone bridge connects the ledge with another ledge on the opposite side of the cave. It was then that they spotted a human skeleton with torn clothing and an old backpack had fallen beside it. Roland volunteers to investigate. He notice sharp stalagmites beneath the stone bridge below him. Wormie mutters, “I’ve got a bad feeling about this.”

Roland opens the bag and finds a single unopened foodpack. He studies the skeleton and discovers bite marks on the bones. Bite marks?

Before he can ponder further, a 2-metre long womp rat with glistening fangs and wiry fur jumps toward him from the shadows. An instant later, other womp rats appear from hiding and attack each rebel.

Roland opens the foodpack’s cover and throws it over the edge. The womp rat is immediately attracted by the smell of cooked food, follows the pack into thin air and falls, impaling itself onto a stalagmite. Drew, Steven, and Roland finally draw their blaster and manage to kill their respective attacking beasts.

One last womp rat is about to pounce on Wormie, but the young rebel shuts his eyes and calms himself. The womp rat leaps. Suddenly, Wormie draws a shimmering sword of blue energy and cleaves the beast in half. Drew, Mark, Stevens, and Roland finally realise that Wormie is the hero Luke Skywalker, the rebel pilot and Jedi apprentice who destroyed the Death Star in the Battle of Yavin several months earlier.

When asked, Luke tells them, “It was my nickname. My friends called me Wormie back in Anchorhead.”

The storm soon passes, and they crawl out of the cave and discover that Luke’s rental Skyhopper is damaged beyond repair, its sail-like dorsal fin had been torn off by the storm. So, everyone crams into the Skimmer and they travel deeper into the Jundland Wastes.

Several hours later they arrive at the location Labria described: a place where two large canyons merge to form a larger canyon. They spotted the pre-fabricated tents of the Imperial Ubiqtorate encampment on a ridge in the middle of the canyon floor. Drew suggests, “We wait until after Second Twilight. Then we sneak into the camp to try to retrieve or destroy the data.”

“How are we going to manage that?” Mark asks.

“Luke and I will sneak into the camp, while you look out for guards. We’ll try to locate their portable computer database and see what we can do to destroy it.”

At nightfall, they execute their plan. They sneak across the open canyon floor to reach the base of the ridge from the south. But Roland is not quiet enough, his boot scrapes some loose stones and an Imperial stormtrooper appears out of the darkness with his rifle pointed at the gambler. “Halt! Identify yourself and your purpose.” Mark panics, draws his heavy blaster rifle, and sends a bolt through the trooper’s armour, frying his chest under it.

They halt their advance and look around for anyone noticing Mark’s shot. After a long tense moment, they are assured that no one heard the blast. Drew and Luke ascend the ridge to sneak into the camp to find the computer database tent. The rebel trio from Ord Mantell waits for them to accomplish their job, keeping an eye out of for Imperials.

Then, they hear a commotion from the east side of the ridge. The trio move in to investigate and discover four Imperial stormtroopers herding a lone Duros away from the camp. The rebels recognise the Duros as Mireep Endigaa, a rebel agent whom they accidentally shot on an earlier mission on Nar Shaddaa, and later left behind in prison when they broke out of a detention block. The Imperials motion Mireep to stop, and they line up before the Duros with their E-11 blaster rifles raised. It appears that they are about to use the Rebel as target practice.

The Ord Mantell rebels decide to rescue Mireep, after letting him down twice before. Mark, Roland, and Steven unlock the safeties of their blasters and charge the troops. Caught with their guard down, the troops are easily felled by well-placed shots. Mireep is surprised by the the rebels’ entrance, though the surprise is not entirely pleasant.

Unfortunately, the rest of the Imperial camp also hears the skirmish and are alerted to their presence.

Their comlinks buzz, “This is Luke. Mission accomplished. We’ve purged the database and the locations of all our bases are safe. We’re coming back out. Stand by-” The whine of a blaster bolt cuts off the signal. The Cratertown trio look at each other in horror, then glance at the camp. A large host of Imperial stormtroopers is swarming towards them. 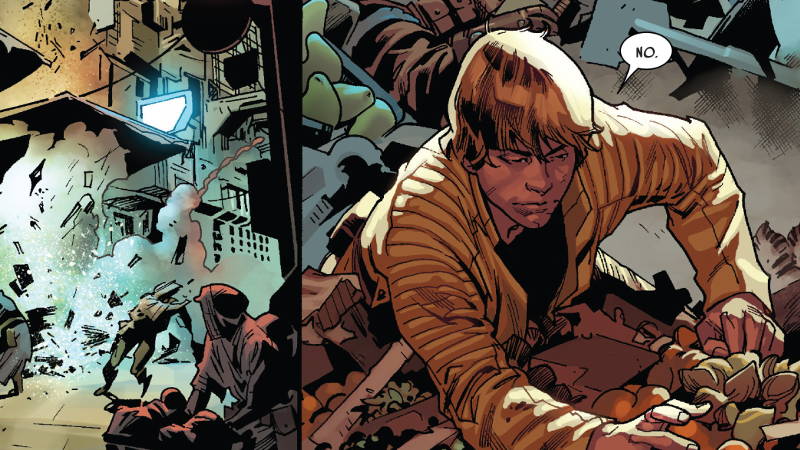 They have just lost Drew and Luke!

Facing a grim situation, the trio and Mireep contemplate surrendering when suddenly, a single Ubrikkian Bantha II cargo skiff appears from the night. Its pilot is a Klatooinian with a red headband while the passenger is none other than Ephant Mon, whose life they had saved on Taboon earlier.

They jump aboard the skiff and flee into the darkness.

Ephant tells them, “Most of my operations are based right here on Tatooine. I am close acquaintance of the local crime lord. When I discovered you had arrived at Mos Eisley I kept a close eye on your activities. My debt to you is now paid. I’m sorry we couldn’t rescue your friends.”

Ephant leaves the rebels safely in Mos Eisley, then bids them farewell and leaves. Mark, Steven, Roland, and Mireep return to the Drunken Dewback, take off into space, and after Mireep sets course for Enteague Minor, they make the jump into hyperspace.

Back at the Enteague Outpost, Mark, Steven and Roland report Drew’s capture to Commander Dominic. He begins planning for a rescue by gathering intelligence on the Drew’s location. Their mission complete, the Drunken Dewback team returns to Ord Mantell along with Mireep Endigaa.

Next episode: The Strikeforce Enteague mount a rescue for Drew Greyhelm.