Previously, some time after the last Strikeforce mission, Drew Greyhelm and another rebel agent were captured during a mission to Tatooine…

Enteague Outpost Commander Dominic assembled bounty hunter Shanna Toarinar, pilot Viveede Briylle Colore, and the gambler Scurvy H. Sharky for the rescue mission. Alliance Intelligence indicated that Drew and the rebel agent he was captured with have been transferred to the molten metal mines of Golrath.

The team boarded the Nexus Point, departed from Enteague Minor and made a jump towards Golrath. 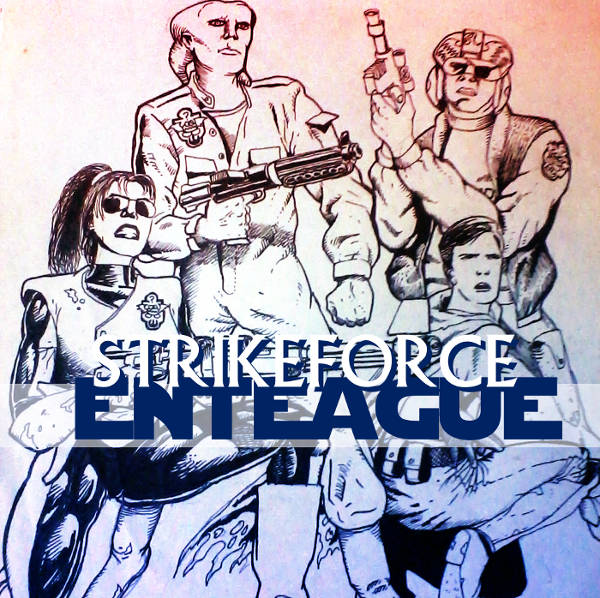 The rebel strikeforce dropped out of lightspeed near a red-tinged world scarred with craters and glowing magma fissures. As Viveede piloted them closer, Shanna detected a distress beacon from a small asteroid moon. Viveede piloted them closer to investigate. Suddenly, a new group of signals appeared out of nowhere. Three Imperial Customs Frigate come hurtling from beyond the asteroid and began firing on them. Viveede evaded the cannon fire and quickly dived into Golrath’s sulphurous atmosphere.

After losing the Imperial ships, they locked onto a signal on the surface of Golrath.

They followed it down and discovered a deserted smelting plant floating on repulsors over a lava-filled crater 3.3 kilometres in diameter. There was not a hint of life nor any activity on the small city-like structure. Several minutes later, the Nexus Point was resting on her undercarriage upon a landing platform, her ion engines cooling down. When they disembarked they found the air was uncomfortably warm and smelled  and breathing was difficult.

Ran Into Some Old Friends

Scurvy noticed a ship coming in to land, noting that it appeared to be a one-man scout ship. Viveede and Scurvy released the safeties of their blasters, but Shanna gestures for them to stand down. She felt through the Force that the pilot of the scout ship was an ally somehow.

The scout ship landed and its top hatch popped open. It was a quite a relief to see their team-mate “Wisecrack” who had left to find the Jedi Trace Traverse last year. Wisecrack told them that they could call him by his real name, Athala Navin of Emnyr, a star system in the Enteague Sector. He was the son of a spice-mining lord, so he did not previously divulge his identity freely to anyone.

But most surprising of all he informed them he somehow reached the illusory world of Zarligrenor and had found Trace Traverse there, who taught him a little bit of the way of the Force.

When he left the pocket universe he found himself in this system and his ship’s scopes detected the Nexus Point‘s presence.

Unwise to Lower Your Defences

After exhausted by their enthusiastic greetings, they briefed Athala of the situation and proceeded with the rescue mission. The door from the landing platform to the smelting base’s interiors was locked. When unlocked, the door slid open to present them with their first obstacle: an IG-series assassin droid. The four opened up, trading fire with the droid until they disabled it in a smoking heap of metal.

Near a corridor junction, they caught a glimpse of two figures flanking them. Shanna identified them as the bounty hunters they tangled with before on Tatooine: Jodo Kast on the left and Puggles Trodd on their right. The rebels drew their weapons to fire but a blast door quickly slammed shut to protect the hunters. However Puggles Trodd managed to roll a grenade their way. The rebels took cover as the grenade exploded, inflicting no harm to them.

They turned right down the corridor and then made a left. Three stormtroopers awaited their arrival and fired at them. The four rebels outnumbered them and naturally won the battle. Immediately, they took another left and went their deeper into the base before they heard a hissing sound. A yellow gas descended from the air vents to envelop the team. Before they knew it they fell unconscious onto the floor.

Shanna, Viveede, Scurvy, and Athala awakened in cell bay with eight uncomfortable sleeping pallets and an enclosed commode. A deadly laser grid prevented their escape through the doorway.

Sitting on their respective pallets and peering curiously at them all were Drew and his fellow captive. Drew informed them they were still on Golrath and introduced his team members to Luke Skywalker. The Enteague rebels were honoured to meet one of the Heroes of Yavin.

Soon after, they came up with an escape plan. There was a single stormtrooper guard at the control console outside. Luke and Athala employed their Force abilities to cloud the mind of the trooper and told him to deactivate the laser grid. That done, the rebels stormed out of the cell and knocked the trooper out. They recovered their gear in a storage cabinet on the east wall of the control room. Meanwhile, the exit beckoned them from across the room.

Outside, Puggles Trodd and three stormtroopers spotted them and dived behind some crates while firing at them. The Lasat bounty hunter kept lobbing fragmentation grenades at them. The rebels charged with blaster blazing and the Imperials and their ally fell, severely wounded on the floor.

Something Alive in Here

Luke suggested they head down a dark maintenance corridor to keep away from traffic. They agreed and proceeded cautiously. It slowly became hot and uncomfortable. Then they found themselves bathed in the red glow of a flowing river of magma. They were on a semi-circular ledge on the wall of a large natural cavern, while another ledge awaited them across the deadly river. They tossed a length of  syntherope which snagged a cluster of conical thermo-sensors among the stalactites far above the magma, and safely swung across one by one. Graciously, the extreme heat of the magma river did not affect them seriously.

So they pressed further into the maintenance corridor.

Soon the corridor curved downwards and eventually disappeared into a pool of tepid and murky water. The path re-emerged on the far side of the black lake. Athala sensed a life form in the pool with the Force.

One by one they swam across with their weapon ready, but no one was attacked. But when Viveede, the last man in the column, almost emerged from the water, a pale leathery tentacle snagged his leg and dragged him back in with a splash. Viveede identified the large, immobile, anemone-like creature as a slatchin. Viveede broke free and blasted the slatchin into oblivion with a blaster. 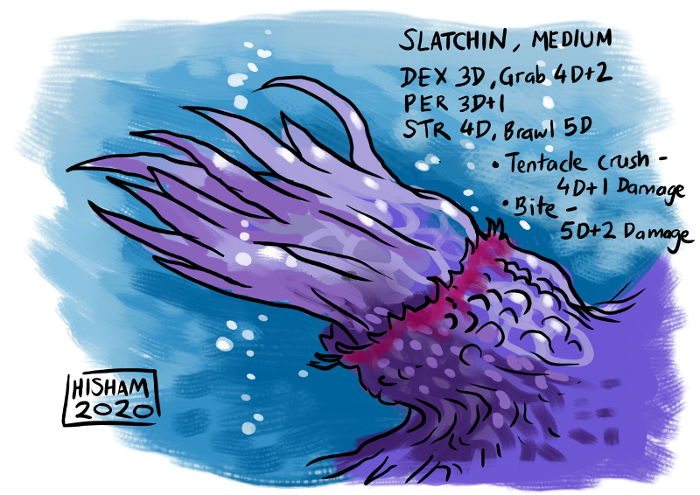 Going Good Against The Living

After Viveede recovered from the slatchin attack, they moved on and found themselves at a door. When the door opened Jodo Kast appeared from hiding and fired a single dart at the point man, Scurvy. As quickly as he appeared, the bounty hunter vanished into the shadows.

Drew checked the dart and tells them that the poison in the dart is called turrino, derived from magma gases only found on Golrath. He knew that a colony of obscure sapient species known as Minvekmin are the only ones who are able to detoxify the poison. Luckily, there is a Minvekmin colony close by, so they would have to hurry or Scurvy would be dead soon.

It was not long before a dead end brought their subterranean journey to a halt. There was a metal grate five meters above their heads and red sunlight poured in through it. Shanna jumped up and knocked at the grate’s latch to open it and a single surprised stormtrooper unexpectedly fell through the hole and onto them. Athala’s machine pistols incapacitate the trooper. They climbed out and found themselves surrounded by sulfuric clouds and ash-filled skies on a landing platform. They quickly boarded the Nexus Point and Drew directed Viveede to pilot them towards the Minvekmin subterranean colony.

The colony was constructed in the old magma tunnels of a long-dead volcano. The Nexus Point sets down on a natural ledge besides an entrance to the colony halfway up the mountain. The Minvekmin leader, Philo, offered to aids the rebels. The diminutive species helped to bear the weakening Scurvy into their colony, which is built from multi-faceted crystals.

Some Kind of Local Trouble

Suddenly a familiar female Human figure emerged from the among the shiny Minvekmin houses. Her blaster pistol aimed at the Rebels, Zardra says, “Shanna Toarinar! You stole my stun cloak at the Oasis on Tatooine. I am here to reclaim it.”

Shanna asked bewilderedly, “How did you know we were coming here?”

“Your man was poisoned with turrino for my benefit. When you escaped it would be difficult to contain you in a deserted mining facility with minimal troops. So Jodo Kast forced you to choose to come to this colony. When he gave the word, I sneaked in here and waited for.”

Shanna said with a smirk, “Well you can’t have your stun cloak back.”

“Then go for your blaster.”

The Minvekmin and the other Rebels backed off as the two bounty hunters faced off, their gun arms poised for a quickdraw. They eyed each other menacingly for some time while their fingers flexed centimetres from their holsters. Zardra gritted her teeth as Shanna concentrated fully.

Zardra drew her blaster, and Shanna grabbed hers while evading the single deadly blaster bolt which streaked past her head. Then Shanna’s blaster flared and the red bolt struck home. There was bright flash, a shower of sparks, and a cloud of smoke.

Zardra glared at Shanna with furious anger. The hunter fell onto her knees, and crumpled into a heap on the floor. Then Shanna returned her blaster back into its holster on her hip.

“Looks like I still get to keep the stun cloak.”

No Such Thing As Luck

Philo put the dying Scurvy into a crystal detoxifying chamber. Red gases billowed into the chamber and engulfed the gambler. The antidote gas also penetrated his skin, lungs and entered the bloodstream to neutralise the turrino. Not long after, the chamber door slid open and Scurvy stumbled out completely healed from the poison.

Leaving Zardra to be cared by the Minvekmin, the rebels thanked Philo and his people, then boarded the Nexus Point to return to Enteague Minor.

They reached the Enteague Outpost the same time their pirate team-mate Phoenix Avalon who had purchased a cheap MC513a Mon Calamari jump freighter from a seedy dealer from the trading world of Keyorin, and named her Firebird.  Eveyone thought that it was too cheap to be true…