Episode 12: Quest for the Weaponship

Previously, the strikeforce travelled to Golrath to rescue Drew Greyhelm and Luke Skywalker from incarceration…

After Commander Skywalker had departed Enteague Minor to return to his own base, Drew returned to work and received information from Ooogle Flutzgle, his informer in the Igmalar system. The communiqué stated that the Kinooine Pirates had stolen an Imperial EF-76B Nebulon-B Escort Frigate codenamed Weaponship. Drew assembled a team that consisted of the bounty hunter Shanna Toarinar, minor Jedi Ben One-Howel, gambler Scurvy H. Sharky, and pirate Phoenix Avalon. Drew tasked them with contacting a known retired Kinooine Pirate commander in the Velktwarr system. They believed that he would be participating in the Lost Moon Festival there.

Phoenix’s new freighter Firebird landed in Vegorr spaceport on the continent of Eastern Nexyn in the late afternoon. The spaceport was located 17 kilometres north of the Festival site in the Forbidden Zone where no mechanical vehicles were allowed to enter. By tradition, those who wish to travel there must walk there. The four rebels walked south along the Festival trail on a creaky wooden catwalk on a swamp while surrounded by giant twisting mangrove trees.

Soon, they were walking on a shadowy path in the thick, mossy woods. Before long, the Caldirin River blocked their path. On the far side of the Caldirin, they saw – incredulously – a dry, dusty desert with a lot of sagebrush, tumbleweed, and short cacti.

A dark-haired human boy in his early teens sat on a big rock by the river, wearing a sun-cap and a waist-pack. He said, “Heavy rain upstream last night. Washed the bridge away. But it doesn’t matter. Everyone wants to go has already gone. The new bridge will be constructed tomorrow.”

“Who are you?” Shanna asked.

“Lirik Tuain. I live in Vegorr. You’ll have to swim across.”

From their observation of the river, the water was deep and fast however Rebels were able to fight the current and reach the other side.

The local primary, the blue dwarf Ruif, began to set. Halfway to the Festival site, they come across a needle-like pinnacle obelisk which ascended fifty meters into the air.

A human male in his early thirties sat in the long shadow of the rock. Clad in an arid suit with shoulder padding, a backpack, aged dust boots, he wore a blaster carbine at his side and a vibroblade in his thigh sheath. He greeted the wary rebels, “Greeting, outsiders! I am Veral Jinnor, on my way to the Festival like you are, no doubt. May I join your company?”

They allowed him to tag along.

When the stars came out, they came to a rocky area with strange, precariously balanced boulders strewn everywhere. Jinnor persuaded them to call it a night and make camp. “Dinner’s my treat,” he said and began cooking a meal.

At dinner he regaled the rebels with the Tale of the Lost Moon.

Tale of the Lost Moon

“Once, a large moon dominated the night skies of Velktwarr , tide-locked to it. The ancient Twarri mystics were very much in love with it, and worshipped it even though they knew what actually was scientifically. As time passed on, they developed new technologies and built a chariot to ride to the moon. The mystics went there in force and created new dwellings on the moon’s far side.

“After ten centuries without contact with Velktwarr, the planet-bound Twarri forgot about moon dwellers. Time changed everything. On the moon, formerly peaceful Twarri mystics had become a new generation of bloodthirsty warmongers calling themselves the Galgorth.

“When the Twarri and the Galgorth rediscovered each other, the Galgorth went to war with the motherworld, trying to conquer it for themselves. During the war many peace-loving Twarri were slain mercilessly in a multitude of minor skirmishes.

“But the Galgorths had underestimated the Twarri’s resourcefulness. A handful of Twarri Swordmasters captured a number of chariots of the initial Galgorth invasion force and travelled to the moon to confront their invaders.

“In the next full moon-turn, came a battle that raged around the moon, which lasted for a hundred days. The Swordmaster Captain led a phalanx of three battle chariots and headed for the surface of the moon tide-locked to Velktwarr. There, a fusion-crystal storage bank had been built to provide raw energy to the Galgorth invasion force. The Twarri warriors rammed their chariots into the energy storage bank.

“It produced an explosion so great that the shockwave obliterated Galgorth chariots girdling the moon, and shattered windows on Velktwarr’s far side. Galgorth dwellings was damaged irreparably, and the moon was out of its orbit around Velktwarr into the eternal night. As it receded into the distance, the moon slowly shattered to dust.

“The Lost Moon Festival celebrates this victory and honours the names of all the Swordmasters who perished in the final battle.”

After dinner, they all went to sleep except for Jinnor. He sneaked up to each rebels to steal their blasters. As he fled, the rebels woke up and chased after Jinnor. He tried to hide among the rocks, but he was unsuccessful. When he pointed his blaster carbine at the rebels, they blast him, after which they recovered their weapons.

The next morning they arrived at the Festival site,. There were many humans and Twi’leks, as well as a smattering of Aqualish, Duros, Rodians, Sullustans, and Quarrens. Also, the native Twarri were ubiquitous, running local cultural booths.

A large Twi’lek named Bek Aboleth who ran a gambling booth, he shuffled a deck of sabacc cards, but was unresponsive to the rebels’ questions about their quarry: the former Kinooine pirate leader.

However a human named Tran, a food peddler, told them he could give them the information for 500 credits. He informed them that the person they were looking for was Tiim Kyber, who monitored all the non-cultural booths run by non-Twarri here. His office was an unmarked wooden shack at the back of the festival. Tran also informed them that the entry pass phrase is”Jabba’s blubba’s made of rubba.”

After some time looking, they found the shack and approached the bulky Gamorrean guarding the door. A quick recital of the pass phrase allows them to be admitted. There was a gray-haired human in his fifties – with excellent physique for his age – sitting at a desk within. At his side, a thin and wiry Twi’lek bodyguard bearing a hunting blaster stood fastidiously with an angry expression.

After a brief introduction, they got down to business. Phoenix explained, “Mr. Kyber. Your former comrades have captured an Imperial Escort Frigate codenamed Weaponship from Kuat. The alliance would like to have this ship, which carries a lot of weapons. We would be grateful if you could direct us to your old hideout.”

“Piracy and privateering does not interest me any more. I will make a map of my old hideout at Fergash Mountain on Kinooine and save it onto a datacard for you. Tell my former compatriots Kyber of Kabray sent you and you’ll be fine.”

They thanked the elderly man and made the return journey back to Vegorr Spaceport.

The Firebird dropped out of hyperspace and flew into Kinooine’s atmosphere. The world was mostly dry rock and jagged peaks, with winding river flowing into sea basins. Where the continental shelves met volcanoes were rife. But the rebels were not going anywhere near a volcano according to Kyber’s map. 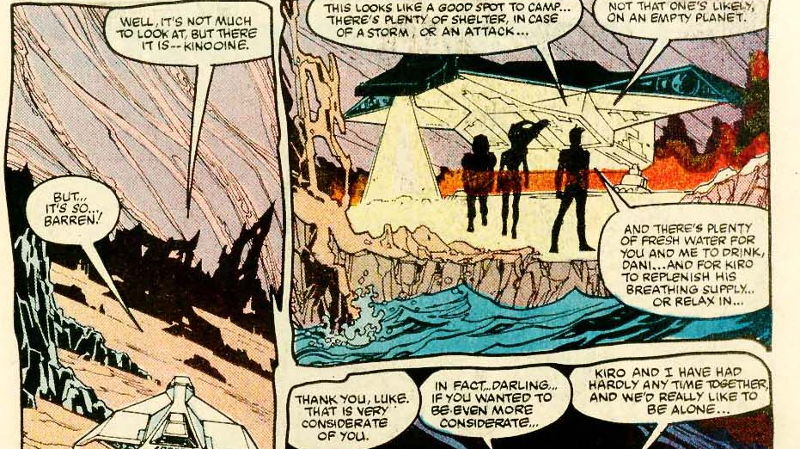 As they approached the location, a single Incom/Subpro Z-95 Headhunter flew to meet them. When they mentioned Kyber, the Z-95 pilot escorted them to their base hidden on Fergash Mountain. After landing, they met Reekyol, an aging bearded man wearing padded armour. Somehow, the current leader of the Kinooine Pirates took interest in Phoenix, who he saw as a fellow pirate. Ultimately he would not help the rebels acquire the Weaponship. However, he informed them that they had hidden the stolen Escort Frigate in a cave on the middle peak of a mountain range called the Triplets.

The Race for the Weaponship

As the Strikeforce Enteague raced for the Middle Triplet on the Firebird, Phoenix detected a TIE bomber and two TIE fighter escorts on a bombing run for the mountain. Apparently the Imperials have discovered the location of the Weaponship and is willing to destroy it, rather than allow it to fall into enemy hands. When Phoenix manouevred the Firebird behind the Imperial fighters, the rest of the team fired the ship’s cannons to vaporise them.

Using Reekyol’s instructions, Phoenix found the cave, docked with the Weaponship and entered the deserted ship. To their great surprise, the weapons were not being carried by the ship. There were thousands of Imperial-grade weapons, from blaster pistols to heavy repeating blasters built into the structure of the ship. To seize all the weapons, the Alliance would need to dismantle the entire ship. Whomever planned this must have been insane.

On the bridge, they also discovered that the ship was fully automated and require minimal crew to operate.

Bringing its systems online, Phoenix piloted the Weaponship out of its cave with the Firebird hard-docked to its neck section. Modified repulsorlift systems allowed the capital ship to escape the planet’s gravity well only to be confronted by two of its Imperial sister ships waiting in orbit.

The other Escort Frigates ordered the outgunned Weaponship to surrender.

The Battle for the Weaponship

Suddenly, a fleet of eight Corellian Gunships and a squadron of Z-95s swooped in, firing repeatedly at the Imperial vessels. The rebels, aboard the Weaponship, also opened fire, scoring several hits upon the enemy. Discovering that the tide had turned on them, the two Imperial ships yawed hastily and burned their engines to flee the battlefield while the Z-95s gave chase.

The lead Gunship hailed them. “This is Reekyol. I am impressed with you, Phoenix Avalon. We’d like you to be the new leader of the Kinooine Pirates. I am old and will be retiring soon. You have great potential, young one. Please accept our offer.”

Surprised by the offer, Phoenix replied, “I am honoured you speak well of me, and have chosen me to replace you. But I have duties to my team. I promise when the Civil War ends, I will come to you.”

“Fair enough,” Reekyol said. “The offers stands indefinitely. We will be waiting. Kinooine Pirates out.”

As the Kinooine Pirate fleet dispersed from orbit, the rebels set a course for Enteague Minor and headed back to base in triumph.

When the team arrived at Enteague Outpost, Alliance High Command personnel took command of the Weaponship. They then departed to an undisclosed location for dismantling, after which the Alliance would distribute the weapons among various rebel outposts and cells.

A week later, bounty hunter Ace Browning Crossfire appeared out of nowhere after a long hiatus. He now had a cybernetic arm and claims that Darth Vader himself slashed it off with his lightsaber during battle.

The others said, “Yeah, right.”