When Irfan signed up for school here in a new state, I had no idea how he would adapt. Would there be older, wiser example students there? Will there be anyone in school that would inspire him? Back in Pandan Indah, the answer would be a solid no.

Less than a week into the school year, Irfan had already found a close friend. Soon after we were all acquainted with his friend’s family. They live closer to school, in a housing area that we thought we would move in.

His friend had an elder brother – a humble, smart, intelligent and witty teenager who received good grades at school with ample knowledge about computers and guitar-playing. He and Irfan’s classmate came over to the house and helped me try installing Linux Mint onto the new laptop.

Needless to say, I was very impressed with this boy.

However, after a two-year battle with leukemia the older brother of Irfan’s friend passed away this week. We’ve known since the beginning and we’ve even visited him when he was hospitalised a few weeks ago. But in this case, I was not mentally prepared for it. Being so young, smart, kind of heart, his death affected me deeply.

Coming to know other older teens in the area, I now firmly believe that Irfan will have no shortage of good people to look up to, but I wish his brother’s friend would have stayed longer to be a great inspiration for Irfan. Allahualam.

I wish I had more time to talk to him about things, and it was an honour to have met and known him. 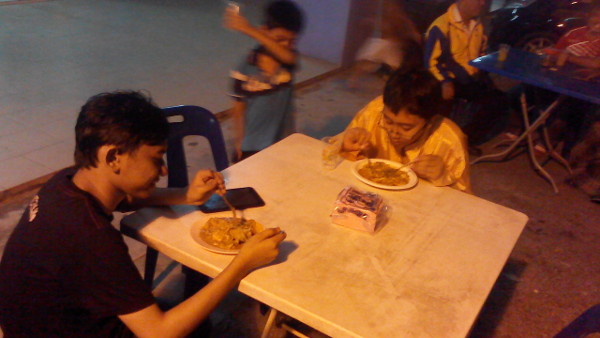 Irfan and his brother’s friend enjoy some char kuey teow

Note: Because I did not ask for permission to write about him from his family, names will not be mentioned.