As role-playing practice for my English theatre arts class, I ran a FFG Star Wars RPG session for the students. If playing a space swashbuckling character who might also be an alien or a droid does NOT stimulate their acting chops, I have no idea what will! 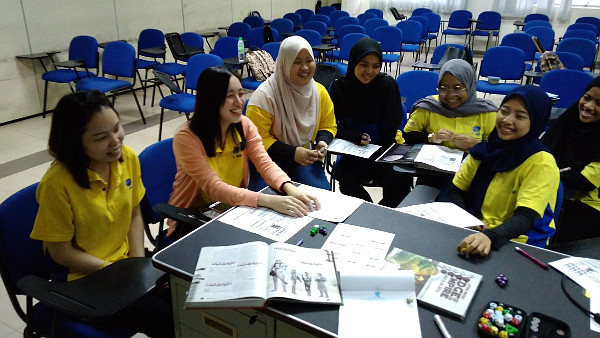 Actors and role-players in my English Theatre Arts class

Although it was technically a Force and Destiny game, we had character types from Edge of the Empire too, thanks to the Legends of the Galaxy pregenerated character sheets. It was the same pregen sheets I had used in a class earlier in the year.

With the Empire clamping down hard on the remote system such as Zaadja, it became more and more difficult to travel in and out of the system. Meanwhile, a rebel general named Pella Vick had been trapped on Zaadja because of the martial law.

A group of six rebel operatives had been sent there to extract the trapped general whose last known location was the lidium mining town of Cumulus. 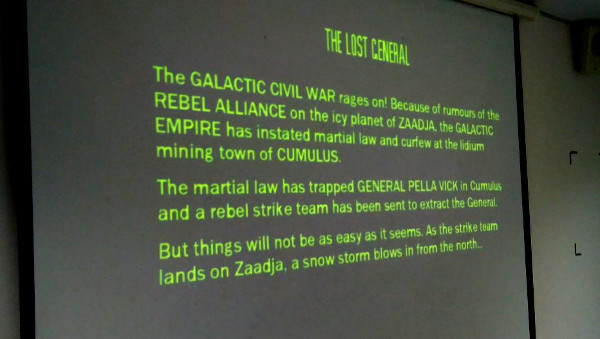 Yes, the theme music was piped in

The team disembarked from the C-ROC Gozanti-class cruiser they had chartered to take them to Zaadja. As they walked out of the landing field, the C-ROC took off again to resume its scheduled cargo run in the Outer Rim Territories.

The mean-looking Zabrak named Merick led the group into the town centre. The air was frigid. Freezing winds blew in from the north. Tall, dark clouds laden with ice and snow rose above the horizon to the north east.

The town square was sparsely populated. One or two citizens could be seen briskly walking from shop to shop, their eyes on the cold, hard ground. In fact there were more Imperial stormtroopers than citizens in the Cumulus streets.

One stormtrooper spotted the group and approached them, and by default the person on point: Merick.

“Newcomers, eh?” the trooper said. “What is your business here?”

Merick answered by igniting her blue-bladed lightsabre and skewering the trooper’s chest. (One Success on her Lightsabre skill check which took 10 Wound Points off the Imperial.) She quickly deactivated her weapon and caught the trooper before he fell to the ground, dead as a doorknob.

Everyone else in the team was horrified. There were other stormtroopers coming into view. They noticed that a trooper on the roof of a two-story building, a store front, had turned his attention on them.

Flames, the droid with her blasters safely stowed in her burly chassis, had already peeled off from the group and gingerly approached the store front. She called out to the stormtrooper on the roof, “Sir. Hello, sir!”

“I am a newcomer to this planet and I would like to know where I can have some delicious local food,” Flames said. (She successfully rolled a Deceit check, but with a Threat.)

“Oh, there’s a café, the Greedy Bantha, a couple of hundred metres down that street,” he said, gesturing. “But wait a minute… (thanks to the Threat) you’re a droid! You don’t eat.”

“No, but I inquire about for my organic masters who arrived with me.”

He looked at the spot where Merick had killed the stormtrooper. Flames turned to look and saw that her teammates and the dead trooper had vanished from the spot. The trooper said to her, “All right, droid. Carry on.”

Flames headed back to where the team was and noticed that the rest of them had sneaked into and hid themselves in a small, smelly alleyway. The dead stormtrooper had been moved here too, unnoticed. 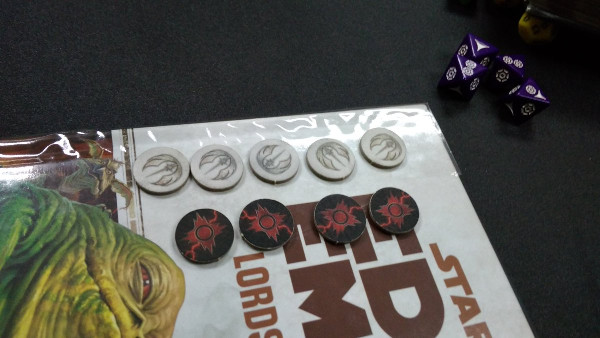 The initial pool of Light and Dark Side pips rolled

Soon after they left the body and headed for the Greedy Bantha Café together in order to look for clues to the location of General Vick.

Conflict in the Greedy Bantha

The café was a dome of rough, black rock with a autodoor that slid open to admit them. A tall lanky droid served the bar. The tables were mostly unoccupied at this early in the day. There was an unconscious human with an empty tankard, face down at one table. Two Imperial officers were deep in talks at another table. Finally there was a woman in spacer’s outfit having a meal silently.

The team took a table while Malea sat at the bar. She paid for everyone’ meal (10 credits per person – even Flames) asked the droid about General Vick, but then the two Imperial officers sat beside her, asking what business she had there. Malea told them she was here visiting a friend (successfully rolling Deceit) and satisfied with the simple answer, the officers left the café.

The rest of them confront the lone spacer, a dark-skinned woman with a shaved head. She told them that there had been rumours that General Vick might be hiding in the lidium mine tunnels after the Empire declared martial law on Zaadja. 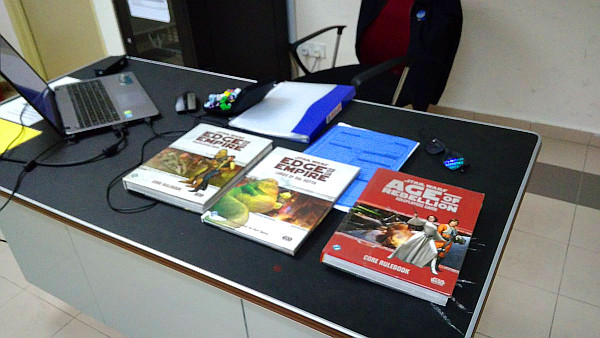 I wish I was able to bring more books. Needs thicker biceps

They coerced the spacer to escort them to the mines.

Snow had started to fall, albeit lightly. Still it was cold enough that upon reaching the mines, Byt was uncontrollably shivering. (She was the only one who failed her Resilience check and lost two Strain.)

The entrance to the lidium mine is at the foot of the hill behind the town. It appeared unguarded, but the closed blast doors blocked them from entering. They were considering how to break the lock when Flames stepped forward and punched the door in, shattering it.

Unfortunately, there were four white-armoured Imperial stormtroopers standing guard within. They were caught unawares. A firefight ensued. The first blasts missed their mark. Merick drew her blue lightsabre and thrusted it through one trooper, killing him. Malea attacked with her own lightsabre but her blue blade missed. The trooper she missed shot her in the shoulder. Flames fired her blaster, and the energy bolt hit pressurised steam pipe behind the troopers. Steam billowed out, filling the entrance hall of the mine. Their visibility suddenly impaired, the rebels grabbed the advantage to shoot the remaining two down.

Malea was injured, but she could still walk. 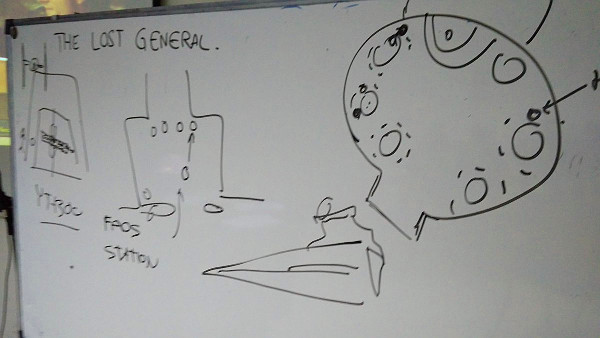 Accompanied by the spacer, the rebels explored the tunnels of the lidium mine until they arrive at a locked door. Byt, the outlaw tech, attempted to the break the computer lock. Malea noticed that the spacer was about to bolt. As the spacer sprints away, Malea sprinted, tackled her and pinned her to the ground. Malea growled, “You’re not leaving just yet.”

She hauled the spacer back as the door opened up. Inside they was General Vick and a pink and silver astromech unit. The chamber was comfortably sized with lighting on the wall, crates, a portable computer, some foodpacks and various amenities.

General Vick was first surprised by their arrival, but they quickly identified themselves. “We are here to get you offworld, General.”

As they left the mines, snow fell heavily. During the walk back to the town, Vick said, “First, we have to go to Faos Station. I have important Alliance business there.”

When they arrived at the landing field they found that Kree was badly affected by the cold. (She lost 2 Strain because of a failed Resilience check.)

Merick asked the spacer, “Which one is your ship?” She pointed at an old YT-1300 light freighted slowly building up snow on its top hull.

After the spacer unlocked the ship ramp, they kick her off the ship. With Kree and Malea in the cockpit, the freighter roared off into the darkening sky, through the sheets of falling snow.

Meanwhile, the comms beeped. “Azalea Rogue, this is Cumulus Traffic Control. You have not been given permission to take off. Please respond.” Malea ignored them.

Upon leaving the atmosphere of Zaadja, Kree noted that an Imperial Star Destroyer was in orbit not far from them. Two TIE fighters were dispatched to intercept them. Malea tried her best to evade the fighters. One of their destructive green bolts strikes the ship’s hull, damaging it. Before a second shot could destroy them, Kree finished her calculation and pulled the hyperdrive levers.

The Azalea Rogue jumped into hyperspace, away from the Zaadja system.

Soon after, the Azalea Rogue reverted back to realspace near Faos Station, a civilian space station. Kree flew towards an open hangar bay. Byt realised that the General’s hand is trembling, fidgeting. At first she thought nothing of it.

As Kree navigated their ship through the forcefield and set her down for a landing, the General quickly headed for the ramp. Byt told the others about about his trembling hand. “What’s wrong with your hand?”

“Nothing. Nothing’s wrong.” But he was clearly showing signs of stress and was too eager to leave their ship.

Suddenly, Vick lost his cool. The general grabbed Byt and used her as a living shield. He held a blaster pistol to Byt’s head. “Let me go and the Twi’lek lives!” He hit a button and the ramp began to descend, opening up to the hangar bay.

Across the bay, the rebels saw a squad of Imperial stormtroopers rush through the main entrance, their blaster rifles pointed at them.

“Easy!” said General Vick, slowly backing out of the ship.

Suddenly Flames had her blaster rifle drawn. A microsecond later, she pulled a trigger and put a bolt through the general’s torso leaving a smoking, glowing hole all the way through. Koogik searched General Vick’s corpse and discovered that the General possessed a number of datacards in his jacket pocket marked top secret. Alliance datacards! The general had stolen them and was going to defect, offering them to the Empire!

Sparks and smoke blossomed where the stormtroopers’ blaster bolt struck, on parts of the ship close to them.

As soon as the ramp closed up and sealed, Kree hit the throttle and the gunned the Azalea Rogue through the hangar forcefield and into space. Meanwhile anti-ship cannons spit deadly energy bolts at them. Kree managed to weave their way through the flak long enough before jumping to hyperspace. 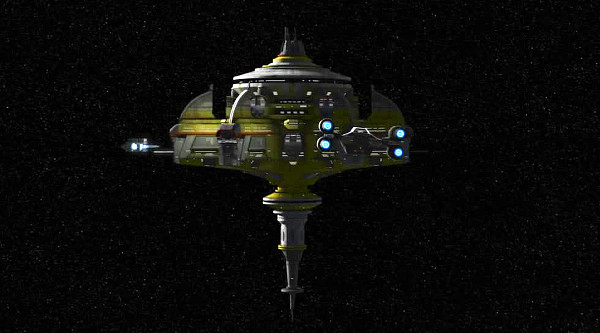 Frame from Star Wars Rebels, “In The Name of the Rebellion” (Lucasfilm, 2017)

The stars became lines, and they disappeared into hyperspace once again, the stolen Alliance datacards safely retrieved and secured. 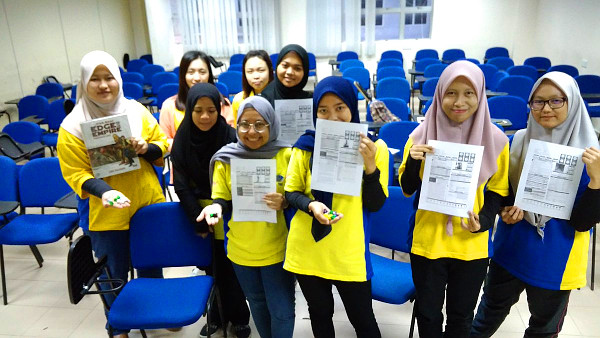 The players with their character sheets