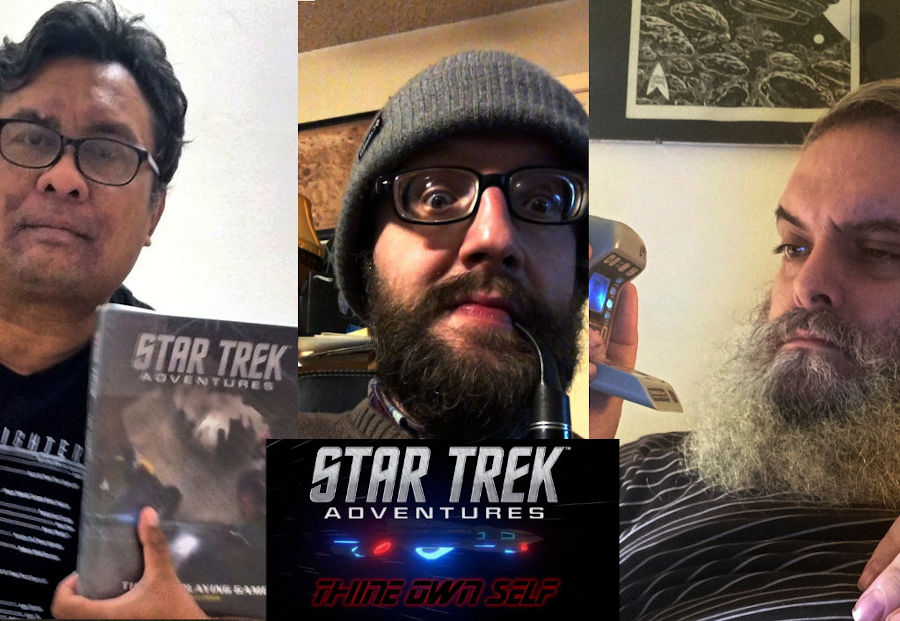 The STA GM and two players

Several months has passed since the mission to the Melpomene Sector. The 2381 new year is just around the corner.

The Saber-class USS Sienkiewicz’s mission is to escort the Federation diplomat Lionel Morikawa to Porticullis III. There, he would mediate a dispute between the New Kamchatka colony and the local Zrasu species, who has developed a slow version of the warp drive that could only reach warp 1.5. Presently, the bridge crew is Lt. Annette Metaxis on Conn and Lt. Cmdr. Leahmann Barclay on Ops. Meanwhile, First Officer Cmdr Kodar Tamat is standing beside Captain Vosgal Toor. The Zaranite captain is seated at the centre seat.

The bridge door slides open and a Mr. Morikawa walks onto the bridge. He stops beside Tamat and whispers, “Is everything coming along nicely?”

Tamat nods to confirm, “We’re about to arrive at our destination, sir.”

“Good. Good,” he says. “I can’t wait to meet the Zrasu. They do have mining and faster-than-light spacecraft capability that only allows them the explore their system. But they do have resources that could be bartered with the Federation.”

“And of course, getting to learn about their culture will be marvelous.”

“Sir,” Barclay says at the Ops station. “How is this not a Prime Directive violation? They’re not warp capable. I mean, I know things were a little fast and loose with regards to General Order Number One back in my day.” Barclay is a man out of time as he was held suspended in a transporter buffer in the USS Adriatic for over a century.

Captain Toor says, “They have a form of warp drive that only achieves up to warp 1.5. They could reach the nearest star, but it would take them a year or so.” 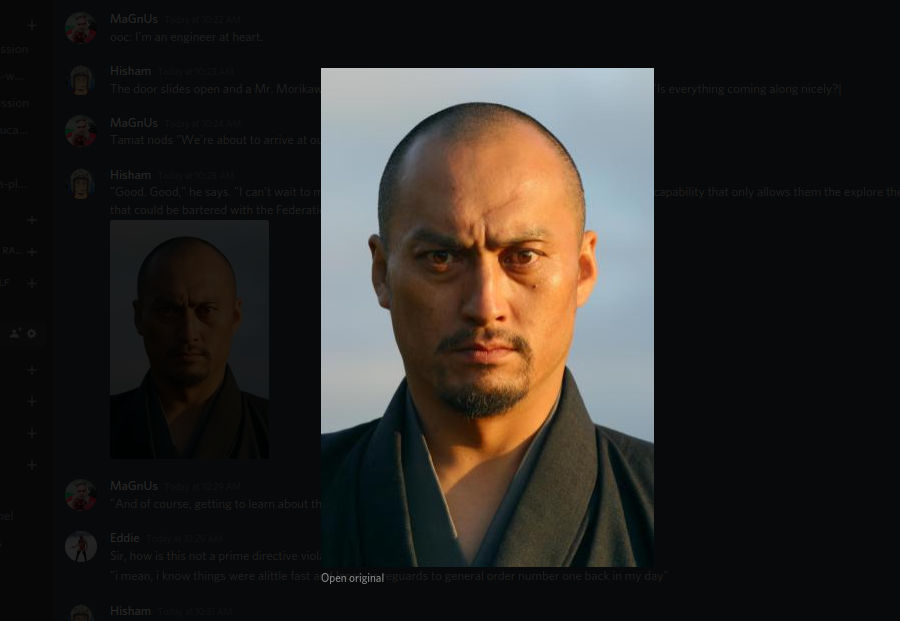 Then Metaxis announces, “Dropping out of warp now.”

With a Little Bit of Luck!

Captain Toor says to Tamat, “The mission is yours, Mr. Tamat.”

“Greetings New Kamchatka colony and Zrasu authorities. I am Lt. Commander Tamat of the Federation starship Sienkiewicz, we are transporting diplomat Lionel Morikawa, who will mediate in your dispute.”

There is a 10 second pause, then you hear a woman’s voice, “This is Dr. Minh, Director of the New Kamchatka. We have been expecting you. Welcome to Porticuliis Three, or as the locals call it: Zraa.”

Before long, Tamat is leading the away team to escort Mr. Morikawa with Barclay and Ensign Sparik in the transporter room. Sparik quips as Vulcans quip, “I am prepared to undergo this mission, sir. Based on experience, away missions with you can be quite… interesting.”

Barclay fools around with his old flip communicator rather than use his combadge. Transporter chief Ortega slides the triple controls and the transporter beam grabs the four of them.

The Times, They Are A-Changin’

And the team find themselves in a bare room with stone walls and floor. It is quite chilly and dark. Lighting is from a single yellow orb set into the 2.5 metre-tall ceiling. They were alone and obviously this is not New Kamchatka. It is deathly quiet and empty. A grey metal door stands at the far end of the room, about 30 meters away. Morikawa asks, “What is the meaning of this, Commander Tamat?”

“I was going to ask you if this was some kind of local custom,” says the Cardassian puzzled.

“I thought we were beaming down to the Federation colony,” says the diplomat. Then he strides to the metal door ahead.

Tamat stops him, saying, “Mr. Morikawa, please, let me take point. This is an uncertain situation.” (At this point everyone rolls Insight+Security with Difficulty of 3, but fails.)

Tamat overtakes Morikawa. But as he crosses an invisible border, there is a flash of blue energy, emitted from a hidden cross-sectional slit that spans the walls and ceiling. The energy causes Tamat to shake and quiver violently. Then he falls to the cold stone floor.

Morikawa gasps, “What? How?”

Sparik rushes forward with his tricorder. “Commander Tamat is fine. He got the wind knocked out of him.” He snaps the tricorder shut. “Like I said before, interesting.” 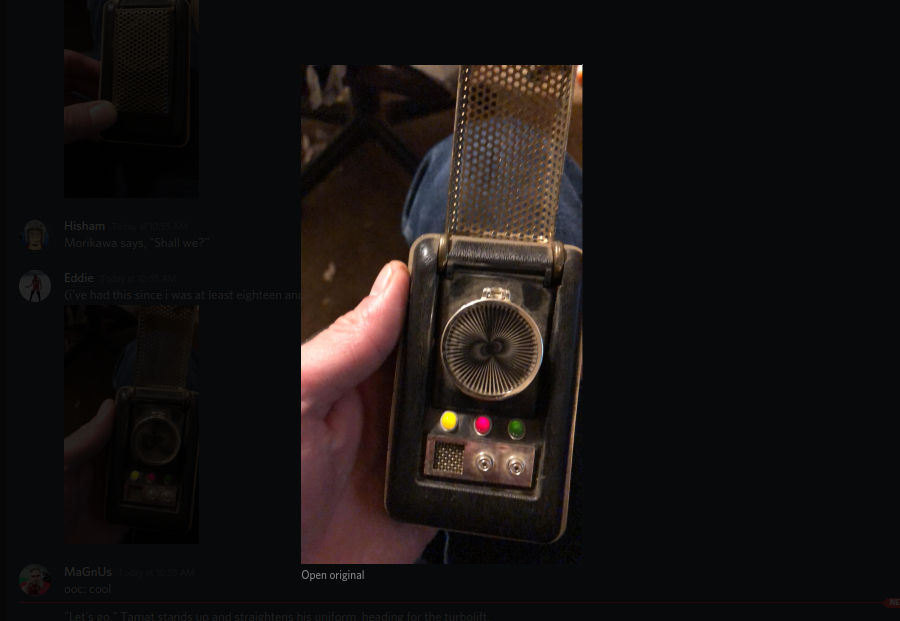 First Officer’s log: Our visit to the planet Porticullis Three is not going as expected. We are here with Federation diplomat Lionel Morikawa to mediate a dispute between the New Kamtchatka colony and the native Zrasu, but we are currently imprisoned in a strange room, with no sight of our hosts.

Some time later, Tamat is awake and sitting on the floor. Sparik scans his cranium with his tricorder for side effects. Barclay stands over them while Morikawa paces back and forth anxiously. Sparik reported, “You appear to be fine, Commander. No physiological or neurological damage caused by the force field.”

“Thank you, Sparik. The force field packs a wallop, but we might find a way out if we use our wits.”

So then, they start figuring a way to escape. (Tamat successfully rolls a Reason+Engineering with his Investigation focus, aided by Barclay.)

Five minutes later Tamat sees that the force field circuity in the wall slit is on the other side of the shield. But there are two spots on either wall where the metallic circuity slips to their side of the wall. Tamat points. “Looks like some manner of capacitor. We should be able to overload it and weaken or disconnect the shield.”

Tamat says, “Getting us out of here, Mr. Morikawa.”

They all still have Type-1 phasers on their belts. “We could overload the capacitor with a phaser burst, sir.”

“Is that a good idea?” Morikawa asks. “We are here for a diplomatic mission.”

“Not that,” Tamat says. “They might hear it and come running. Better to use a tricorder to set up a feedback loop that forces the capacitor to keep drawing energy from the capacitor.” Then he turns to Morikawa and asks, “You are the diplomat; should we wait to see if someone comes to speak to us?”

Morikawa discloses, “We’re not normally abducted immediately at the start of missions.”

Ultimately, they agree to wait for an hour before acting. Meanwhile, Tamat proposes they disassemble their tricorders before their abductors confiscate them. Barclay suggests he do the same to his old flip communicator in case their combadges are taken. It takes Barclay twenty minutes to finish the job. There is a final familiar sound of multi-beeps before the last beep wavers drunkenly and dies. (This was the only gear successfully disassembled and hidden. I ruled that Barclay would roll Reason+Security if an NPC searches him later.)

If I Should Die

Five minutes later, the door on the far side slides up, opening to a well-lit room beyond. A single humanoid alien enters. He wears a jacket over a dark grey jumpsuit. Although he has human-like eyes and slicked back dark hair, he has no human-like nose. There are instead three breathing holes on each of his cheeks. The door closes behind him. Then he walks towards the invisible shield. He silently holds some sort of hand weapon aimed at them

Morikawa exclaimed, “This is not a Zrasu.” (No one could identify it with an Insight+Science roll, Difficulty 4.)

The alien orders them to place all their gear on the floor and step away. With a slight vorp the force field blinks out. At first, the alien commands Sparik to follow him, but then Morikawa interjects, “My job is to talk. I should go.”

Tamat objects, “And my job is to protect you, Mr. Morikawa.”

“You can give us the information we need? Information on your Federation starship and weapons.”

Morikawa turns to Tamat. “I know that most of the time my job is safe. Sometimes it does become dangerous. I know this. But let me do my job. maybe I’ll learn something that will help us.”

Almost imperceptibly stressed and trembling, Morikawa steps over the threshold. A moment later, the alien turns the shield back on. The diplomat says, “Let us talk.” Then he turns and gives Tamat and Barclay a hopeful nod.

“Good,” says the alien, displaying a sinister grin. “Today will be the first day in the struggle to retake our planet from those filthy Zrasu thieves!” 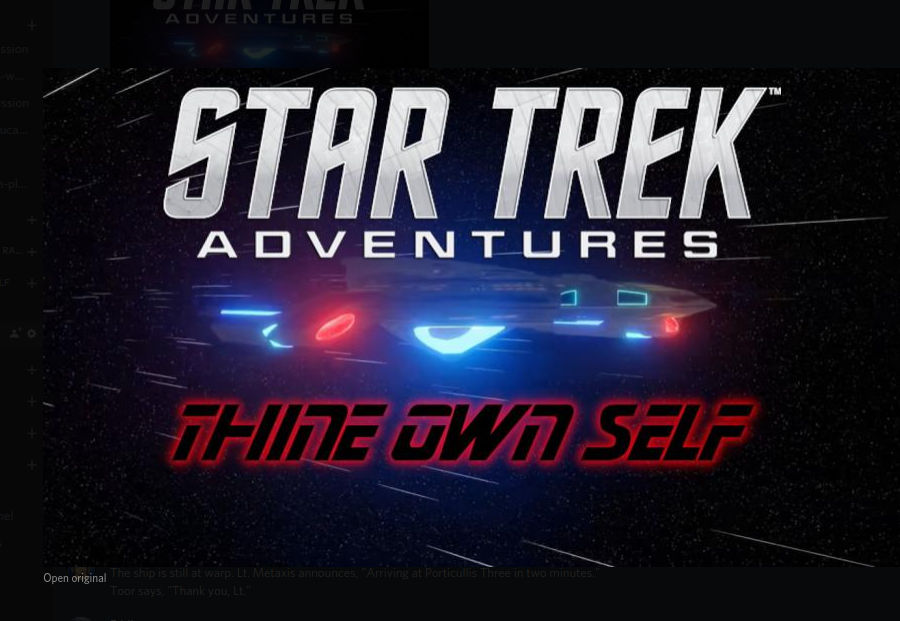 Thine Own Self title card