So the other day I made three pages of rules and stats for a SWRPG GM screen. Those face inward, to the gamemaster who has to refer to rules and tables and some stats at a moment’s notice during a game session. What about the other side? you may ask. What do the players see?

So people print out photos and artwork of scenes of whatever game they use. There are hundreds of official and fan artwork of Star Wars in the internet wilds. If you download the Pirates of the Spanish Main GM screen inserts for Savage Worlds, they also come with inserts for the player side with artwork and map.

Here’s one insert I’ve made for SWRPG on the player side: 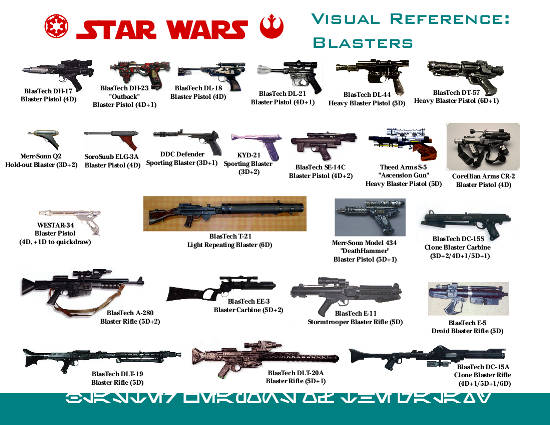 You can pistol whip errant Ewoks with some of these

A blaster visual reference guide. No longer do you need to tell other players, “I have that blaster pistol that Han uses to shoot at the sarlacc tongue.” You can just refer to its name on the insert, or just point to any blaster and tell your player, “You find a blaster carbine in the cupboard and it looks like this.”

Many thanks to the Rancorpit team for damage code for weapons that appeared in the prequels movies, which came out after West End Games lost the Star Wars license. I obtained the photos from all over the internet, especially the Star Wars Wiki.

Click here to view and save the blasters insert from Google Drive!