This weekend I was honoured to be able to run a tabletop RPG workshop during the 2018 Symposium for International Languages and Knowledge which was held at Walailak University at Nakhon Si Thammarat, Thailand. Last year, SILK 2017 was held here in Perlis and was featured on the blog as well.

Here are some photos of the event with an actual play report of the game that I ran for the Thai students. 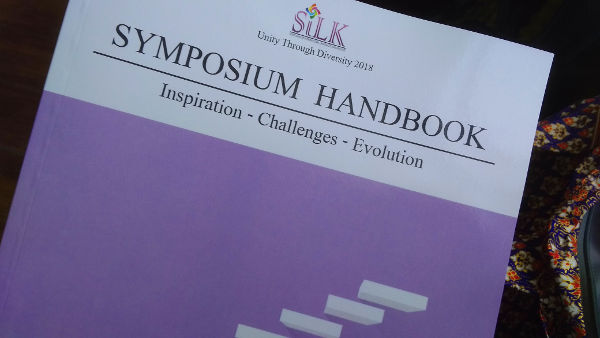 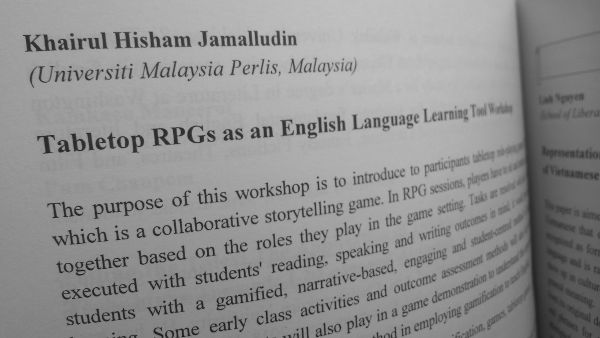 My name is somehow in this book.

The little abstract for the workshop which I submitted a couple of months earlier appeared in the programme book for the symposium. 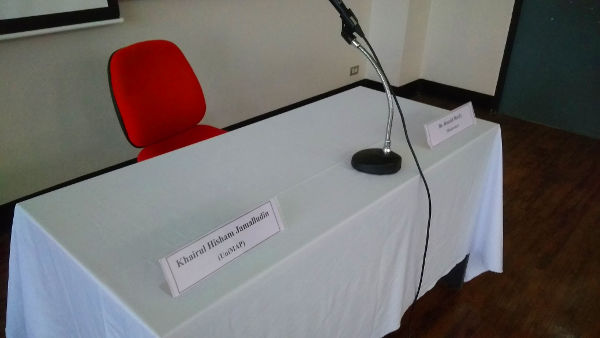 The best part was when they gave me a desk with my name on it.

Parallel talk session were underway when I went to scout the room where I was due to run the workshop. I quickly set up the table and then did some last minute game prep for the coming participants. 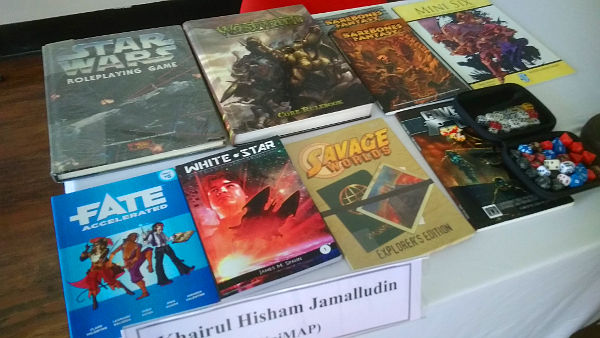 Why most educators are STILL not using RPGs to teach language at this point is beyond me.

Besides showing off the diversity of RPG systems, these book covers displayed side-by-side on the table can be quite pretty. 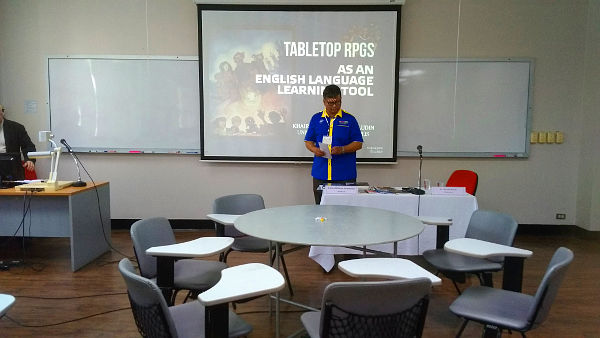 Setting up is easy yet nerve-wracking.

Thanks to the moderator and some students, we got a table at the centre of the room for a game to be run. I decided to run Mini Six because of its relative simplicity and to show that the game could be played with simple six-sided dice instead of the more-harder-to-obtain polyhedral dice.

Truth be told, I was apprehensive of having only 45 minutes to run my workshop. There was not enough time to show how effective an interactive face-to-face game can be in terms of language learning. I did the slide presentation for 15 minutes and then it was time to play.

We had a number of volunteers among the students who was attending my workshop.

Note: The students played a group that was sent by a university to look for their missing colleagues. During game prep, I wanted the participants to think of first names of their characters, but we only had less only 30 minutes of game time. When we began the session, I briefed them the basics of Mini Six system and told them that they will pick the rest of the rules up as we played.

Background: Dr. Megumi Kojima was a senior lecturer and researcher of the university where Dr. Maeda, Miller and Dr. Lee work who suddenly disappeared when she was overseas on research. With research assistants Sarah Aziz and Mariya Markova, as well as her long-time colleague a colleague Dr. Hugo Silva from Barcelona, Dr. Kojima researched old remarkable hotels of Europe beginning from the ones in Eastern Europe moving west.

Just over a week ago, Dr. Kojima and her team had been looking at old hotels in Romania and came across a madman in an insane asylum who spoke of a Scottish hotel north of Fort William built in the 12th century with ancient Japanese motifs and designs. The last e-mail Kojima sent Maeda spoke of photos the madman had shown them and of him yelling “Beware the spiders!” before they left the asylum.

Two days after taking a flight to Aberdeen, Kojima and her team disappeared.

The players introduced themselves at this point, basically mentioning their names and their occupation as listed in the Mini Six character sheet. 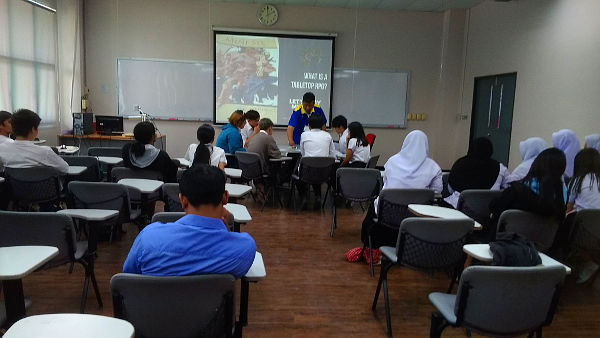 The students are headed north from Fort William, Scotland.

It was deep within winter when the six of them travelled in a Land Rover driven by Mr. Sinclair, headed north along desolate country roads through the snow-covered Scottish Highlands.

Suddenly the weather took a turn for the worse. Snow fell heavier and the roads quickly became icier. (The student playing Sinclair had to roll a Handle Vehicle skill to avoid skidding on the ice, and succeeded.)

As the snowfall became a full blizzard, they looked for shelter. That was when Dr. Lee sitting in the back of the car noticing shadowy shape stalking them in the whiteness of the environment that surrounded them. (A successful Perception roll!) It seemed as if the shape had a head that turned to look at them and two glowing eyes peered at Dr. Lee.

Distressed, Dr. Lee warned the others of this. Something was stalking them in the falling snow in the frozen countryside.

That was when they saw the lights coming from a small building. It was a lonely hotel by the road, slowly being covered by snowdrift with three cars parked out front. They decided to keep driving in case whatever stalked them attacked.

D.I. Viknes was the only one with a firearm. They stopped the car and Viknes drew his gun. But they saw nothing coming at them from the snow. In the meantime, Dr. Lee tried to scrounge something from the car to make a Molotov cocktail to no avail. (Failed Science roll. Also, it was strange to hear the Thai students trying to explain that they wanted to find enough things in the car so they could kill the creature with an explosion. They used non-standard English words that caught me off-guard. For example, improvising a weapon was “making an innovation”.)

At this point everyone had to make an Easy Stamina check because of exposure to extreme weather. I hinted at it becoming even worse for them, but they did not seem to want to find shelter.

Then, they decided to drive their car off a cliff for some reason (which I could not recall) and walk towards the hotel they had spotted earlier.

Another Stamina check, this time at a Moderate difficulty, causes two characters to be Wounded. I forgot which because I did not take notes during the game.

Two of them seemed very weak, affected by the cold, so they double timed it to the hotel. That was when the creature appeared. At first it looked like human-shaped figure. Then they realised that something was wrong with it… not right. Not human.

Viknes ran forward and aimed, not an easy thing to do while shivering cold and freezing. He squeezed the trigger with a gloved hand… and missed. (Failed Shooting check!)

The creature advanced onto them, revealing itself. It looked like a young woman, at least its body did. It reared up like a horse… only unlike a horse, it had a spider’s bloated torso and eight segmented legs. A clawed appendage struck at Viknes who flew into a snowdrift… 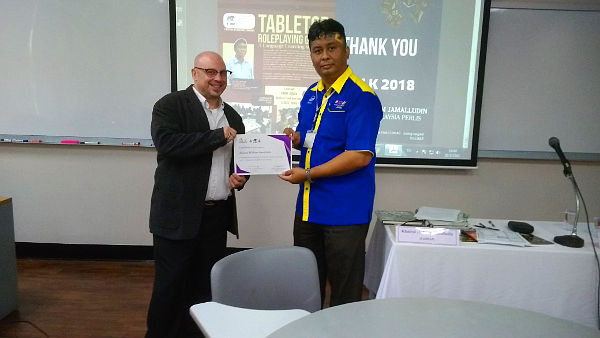 This is something I have never done before but they gifted me a certificate for it anyway.

This was my first time running a workshop to show how tabletop RPGs could be beneficial to educators in language learning in an international language symposium. I truly believe that and I hope in the future I will be able to gain definite traction in using these games in education.