After the first solo session that introduced Bounty Hunter Shanna Toarinar into the campaign, I ran a session for a larger group of players using the adventure included in West End Games’ Star Wars The Roleplaying Game rule book, entitled Rebel Breakout.

I thought it amazing that the group consisted of players from my class as well as players a year and two years younger from different classes from school. Everyone was new at RPGs! 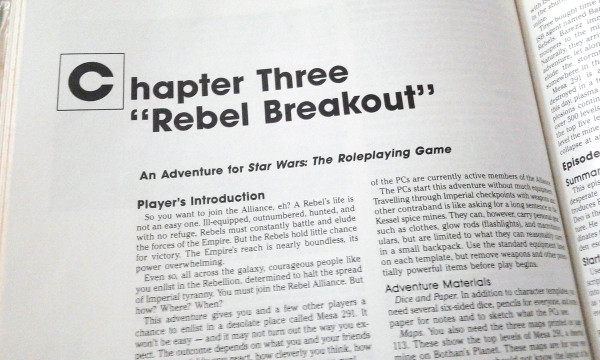 A group consisting of Phoenix Avalon the pirate, Ace Browning Crossfire the bounty hunter, Phix an alien student of the Force (retroactively considered to be of Revwien species), Yoat Den the mercenary and Ben One-Howel an minor Jedi rendezvous at Mesa 291, an abandoned lidium mine on Bothan’s Planet, to meet with Tiree, a rebel recruitment agent. 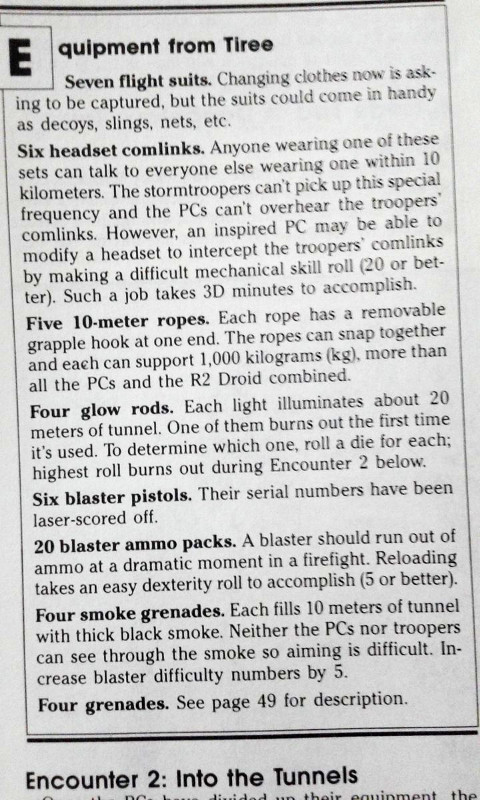 However, Tiree was nowhere to be found, but they discovered the droid R2-D0 a.k.a. “Deo” who claimed that Tiree had been injured in an Imperial ambush on the other side of the mine where their ships awaited.

Deo led them to some supplies, allowing them to gear up with weapons and equipment.

As Deo guided them through the abandoned and dangerous mine, they learned that Tiree had been shot by an Imperial Security Bureau Agent Mar Barezz who was leading a platoon of stormtroopers to capture Tiree and his recruitees.

The team braved cave ins, mynock attacks, an ambush by stormtroopers armed with a repeating blaster and the plasma fires of the abandoned mine as they used a winch to rappel down to deeper levels of the mine where their escape crafts were parked.

They were being taunted by Mar Barezz as they did this.

On the other side of the mine, they had a stand off with Mar Barezz, who thanks to overconfidence, was seriously injured in the firefight.

The far side of the mine, it appeared, was an enormous cavern where three Koensayr BTL-S3 Y-wing fighters were parked. Tiree was unconscious but alive, slumped over in the rear seat of one of the ships. 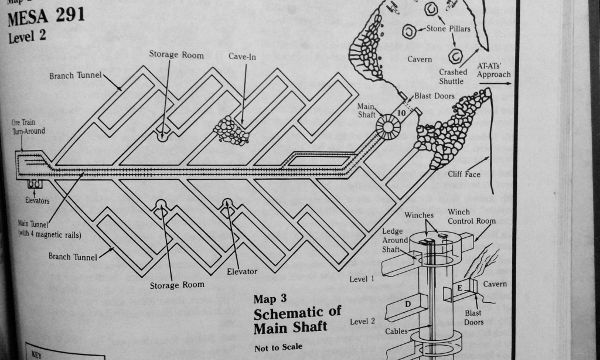 Then the rest of the stormtrooper platoon rushed into the cavern, peppering the Y-wings with blaster bolts as the rebel recruits got into the ship’s cockpits (2 pilots per ship including Deo) and quickly shut the canopy. Deo was lowered into an astromech socket.

Outside the cave, a phalanx of AT-AT walkers were advancing toward them, their forward cannons trained at the large cave entrance. The recruits engaged their fighters’ repulsorlifts and swiftly slid out of the cave. The AT-ATs opened up. Red bolts missed their mark as the Y-wings soared into the sky and into space.

Deo linked the fighters’ navicomputers and input a set of calculations he was preloaded with.

The ships jumped into hyperspace in a sudden blur.

The Y-wings arrived at the rebel outpost in the Tierfon system where Tiree was given medical aid. Phoenix, Ace and Ben were met by a commando who invited them to join the strikeforce he was building which would be based in the Enteague Sector. The team was then transported to the moon of Enteague Minor.